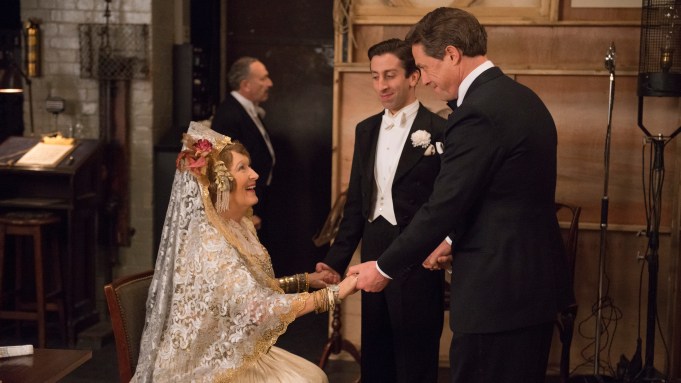 Costume designer Consolata Boyle wasn’t worried about keeping her designs subtle for “Florence Foster Jenkins.” The English biopic is centered around the titular character, a real-life New York social fixture who pursued a musical career during the early 20th century despite a lack of talent for singing. Just as she was known for her out-of-tune performances, Jenkins was equally followed for her over-the-top style of dressing.

“Florence Foster Jenkins loved clothes, and she loved decorating clothes. You could never have too many flowers or ribbons or drapes,” explained Boyle, who reimagined Jenkins’ wardrobe for the film. “She literally didn’t know when to stop. She had no sense of what was appropriate or what was not appropriate…she literally did what she wanted,” she continued. “She created a world of joy around her — obviously it was complex as well, there was a darker side to it — but her love for music just filled everything, and she wanted everything to reflect that joy.”

The film had been in the making for a while; director Stephen Frears mentioned the idea to Boyle in the very early stages of the project; she was already aware of Jenkins and familiar with her singing. When casting (Meryl Streep as Jenkins; Hugh Grant as Jenkins’ husband St. Clair Bayfield) and financing for the film started to come through, Boyle was ready to begin working on the costumes, particularly given the role that dressing played in Jenkins life. She ended up creating original designs for virtually all of Jenkins’ costumes, amping up the lavish factor.

The more conventional dress of the men around her — her husband and piano accompanist Cosme McMoon, played by Simon Helberg — “acted as a foil for her eccentricities” and made her “stand out as even more exotic like an exotic bird.”

“[St. Clair Bayfield] was a beautiful but very classic, conventional dresser of a very English-gentleman type. Hugh Grant wore all his clothes really beautifully. He was perfect in the part,” she said.

And for her portrayal of Jenkins, Streep was game for all of the over-the-top costumes thrown her way, starting with the bodysuit.

“I had to have a bodysuit made for her to bring her closer to the shape of Florence Foster Jenkins because Meryl is very slim, very slight and Florence was a big, rather large stocky lady,” Boyle explained. “Meryl had to be padded all the time, and she wore it with great grace from morning to night. She was a very good sport about that. I think in the end she quite enjoyed wearing it because it made her feel that very lovely large feeling, so it wasn’t quite so bad.”

Boyle added that Streep and Hugh embrace costuming as an extension of their job to tell the story. “Meryl is the most un-vain person I’ve ever met, it’s only about the characters. Same as Hugh,” she said. “They’re very aware of the power of costume, and the importance of costume as part of a performance in expressing the innermost being of a person.”