Accessories are all about standing out, and this season, whether it’s bright red hats, intricately detailed jewelry or unique carryalls, you’re sure to get noticed. 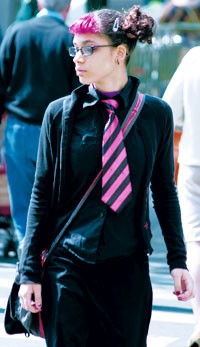 Accessories are all about standing out, and this season, whether it’s bright red hats, intricately detailed jewelry or unique carryalls, you’re sure to get noticed.

It all began with the question, “Where are my glasses?”

Designer Rita Stein, known for her Asian-influenced apparel and accessories, and her friend Jocelyn Stoller have created the I Purse, a pocketbook-cum-carryall designed for all those easily lost personal effects, because Stoller was constantly misplacing her glasses. Complete with an adjustable strap and side zip for extra compartments, the I Purse — whose name, Stein says, simply came to her randomly one day — comes in hand-painted, hand-beaded, hand-embroidered or denim looks, with crocodile and lizard skin on the horizon. They all share in the classic, handcrafted Asian style that is Stein’s trademark — a comfort when, today, slick designs are de rigueur. “Handwork is very special; it holds its own,” she says. “I’m against machine work, anyway.” Next up on her agenda: an I Purse for Blackberries. —Venessa Lau

NEW YORK — A woman should never wear a wide-brim hat if she lacks height. A slender face, not a round one, best serves a chapeau with a domed crown — two rounds just don’t make a right. And felt hats are best worn during the winter months; straw is meant for the summer.

These were just a few of the wise words John Callanan, head designer at Dorfman Pacific, shared with the ladies of the Red Hat Society last week at the W New York Hotel. The group was in town to celebrate founder — and “Exalted Queen Mother” — Sue Ellen Cooper’s 60th birthday. Members, whose dress code for this trip was literally “Gaudy is Good,” came from California, Florida, Ohio and most points in between.

At the Callanan seminar, which kicked off the three-day festivities, Dorfman Pacific hats, all done up in feathers and glitzy pins, were passed around, eliciting the same oohs and ahhs typically reserved for a newborn. Others were tossed into the crowd as giveaways, leading one sprightly senior to dive to the floor, not once, but twice, for the millinery prize. Additional hats were auctioned off to those who had traveled the farthest distance or, believe it or not, had the most recent hysterectomy.

It was an afternoon of red-hatted, purple-frocked sisterhood, as members saw old friends and made new ones. It’s about “time out from reality and a sense of belonging,” said Sabrina Contreras, vice president of merchandising and product development for the Society.

Nanette Ripberger, queen mother of the Cheviot, Ohio chapter, put it best when she said, “The Red Hat Society is all about friendships. And it lowers your blood pressure.” Even the rain Friday did nothing to dampen their spirits — the Society ladies still marched down Lexington Avenue in full red-topped glory to a dinner at Cipriani’s. — V.L.