Fashion designers aren't the only ones who fear being called out for cultural appropriation: Some consumers may be shunning clothes from Black, Asian and minority ethnic brands for the same reason.

Fashion designers aren’t the only ones who fear being called out for cultural appropriation: Some consumers may be shunning clothes from Black, Asian and Minority Ethnic brands for the same reason, a recent survey by African fashion brand Sika’a suggests.

Still, a lack of awareness of non-Western brands far eclipses such fears. The Nottingham-based firm, known for its printed silk dresses, recently surveyed 1,000 consumers in the U.K. and found that 43 percent of Brits were unaware of any non-Western fashion retailers, while 9 percent of respondents said they worried about being accused of cultural appropriation if they were to wear BAME clothing.

The findings are striking at a time when designers from Africa and Asia in particular are gaining international recognition, many of them propelled by platforms like the LVMH Prize for Young Fashion Designers and Paris Fashion Week. 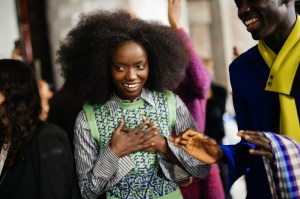 According to Sika’a founder John Tchoudi, BAME businesses will flourish better “when all people understand what [cultural appropriation] means.”

In his view, “fashion should be celebrated and enjoyed by all — as long as this is done in a way that is understanding and respectful of the culture it derives from.”

“Anyone buying African fashion should have an understanding of the cloth, the patterns of the cloth and some of the history and culture that this has all come from, much like when consumers buy purposefully from ethical brands and have a good grasp of why these brands are ethical,” he told WWD, suggesting consumers should know about the origins of their garments, the culture behind them and the reason for choosing it.

Tchoudi called out Stella McCartney for cultural appropriation with her spring 2018 collection, which included African textiles. “Rather than endorsing a BAME business, she used Ankara [wax prints] on a runway with no acknowledgement to the history or rich culture behind the fabrics, causing an uproar with African designers,” Tchoudi said.

(At the time, McCartney characterized their use as celebrating a unique textile craftsmanship, and designed the prints in collaboration with Dutch company Vlisco, a maker of wax fabrics since 1846.)

Wax prints themselves are an example of the complexity of material culture. Adopted widely in West Africa since the late 19th century, Ankara — also know as African wax or Dutch wax — was originally influenced by Indonesian batik, and brought to the Netherlands by Dutch merchants.

Uniwax, a subsidiary of Vlisco, is the only company whose wax is 100 percent made in Africa. The rest is made primarily in The Netherlands, and there are low-cost versions from China.

Tchoudi said 40 percent of Sika’a’s customer base is white, which is reflected in the casting for its look books and web store. (The brand name means “God’s will” in Bamileke — a language spoken in West Cameroon where Tchoudi is from).

“In order for African fashion to grow and develop, it cannot be restrictive or selective in regard to customer base,” he stressed. “We are happy to be playing a part in Western fashion, providing pieces that last and sharing the sheer beauty of African prints with those that would not usually have such items in their repertoires.”

Among other findings of the survey, only one quarter of British consumers owned any clothing from BAME brands and just under a third of respondents said they did not find any non-Western brands where they shop. Only 2 percent said they considered diversity when shopping for clothes.

Valerie Steele, director of the Museum at FIT in New York, said fears of cultural appropriation rank as a “silly excuse” for not wearing non-Western fashions because designers from those countries are eager for their clothes to be worn.

A case in point: She loves to wear Indian-inspired tunics and long trousers, and has been ribbed for it.

“‘What, are you trying to look like you’re from northern India. Isn’t that cultural procreation?'” she was recently taunted.

Her retort: “My friends Farha Ansari from India made this with her company Leaves of Grass. She’s trying to sell it to people all over the world, including people like me. So, you know, I think that from her point of view that would be crazy. This is something she sees as a beautiful look that could be worn by anybody.”

“If there really is that fear over cultural appropriation, then it would then be incumbent upon them to have conversations with people, including the designers,” she said. “If a large percentage of people don’t know about BAME designer brands, then how can there be significant numbers of people who aren’t engaging because of cultural appropriation?”

Kirsten Scott, program leader in M.A. and B.A. fashion design at Istituto Marangoni in London, agreed many consumers are not versed on issues around cultural appropriation and merely respond to garments on an aesthetic basis without asking many questions.

“We know that although more consumers are asking who made their clothes and how, and what from, many still don’t seem to care about the poor labor conditions and environmental pollutions they cause if the price is right,” she said. “Education and publicity about all these issues is absolutely essential. For those consumers that are sensitive to this, perhaps good labeling might help to explain the design process, acknowledge where ideas originated and how their use was agreed, etc. This could allay concerns.”

She also suggested the fashion press has an important role to play raising awareness of new BAME brands.

“It is very good that we are seeing more people of color in prominent roles in the fashion press, for example Edward Enninful at British Vogue, but there is so much more that needs to happen to truly represent the diversity of our societies,” she said. “When we see better representation of people of color within the fashion press, we will see more focus given to more diverse designers.”