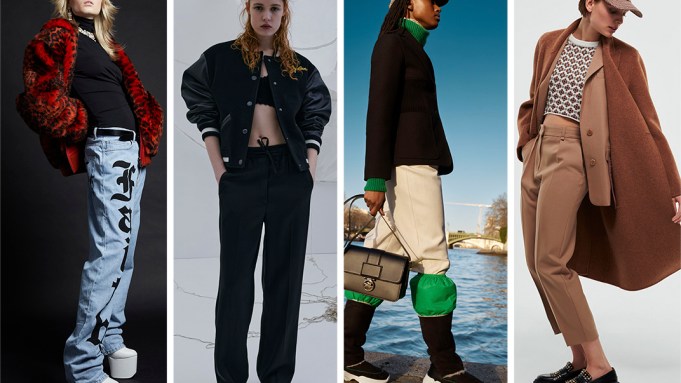 PARIS — As physical runways return, so does the street-style set, and with them, a sense of what’s to come on the contemporary label scene.

With ’90s inspirations galore and the logo still going strong, it’ll be a season of plenty where brands compete for the attention of consumers keen to dip their toes into trends.

For the Sandro woman, temperatures might take a dive but the heat will be dialed right up, as she heads back to the heyday of the Paris club scene, with a wardrobe fit to go to the original incarnations of the Palace and Bains-Douches hotspots full of jewel tones and flirty numbers.

Never one to be locked into a particular decade, the midriff baring will slide toward the early 2000s for a “chic hedonist clubbing” spiel, with Britney Spears as a muse. The Parisian label’s studio also twisted bourgeois codes — and the yuppy wardrobe of the Sandro man of the season — imagining the city’s girls pairing their preppy cardigans with threads nodding to whichever musical hedonism the Sandro woman is into.

Faith Connexion longed for a post-pandemic sense of renewal and landed on big branding. The Gothic script from its launch in 2000 was resurrected for this collection, blown up and scrawled across slim tweed suits, mini bomber jackets and baggy jeans. Founder Maria Buccellati called the visibility from having the name front-and-center “empowerment” for the brand.

The collection pushes to new volumes in its silhouettes and pulls its references from everywhere; no era is left untouched. From the ’50s in slim suits, a Lurex disco dress recalled the ’70s and the oversized hip-hop cargo fit and grunge flannels of the early Aughts — all are reinterpreted here for the cool kids.

“Nothing is too much. It’s like bling but with French flair and very elegant,” she said. Reuse became a touchstone for sustainability. Old collections were upcylced into new wares, and suede jackets are reversible for leading a double life. In another first, the brand also launched shoes, a sky-high platform boot in leather and leopard print with plans for more to come.

At Maje, artistic director Judith Milgrom wanted to return to the roots of the label, so Parisian sexiness will be the name of the game. Think Vogue circa 1988, remixing bourgeois lady-like options with youthful codes like denim — then and now — athleisure, and the mix of menswear-inspired coats and puffers.

Lengths are therefore abbreviated on tops and bottoms, showing legs or midriffs, and asymmetric cutouts played into the tropes of the big houses. No-brainer staples were in the mix, too, like oversize coats and today’s ubiquitous puffers.

Fuzzy cardigans with contrasting and golden buttons, paired with a miniskirt for prim-and-proper brunch, or bejeweled jeans and a crop top for a day on the town were some of the loos shown around a bottle green kiosk similar to the very-Paris gazebos in public gardens or newsstands.

The end result looked like a snapshot of cool Parisian influencers — one part major labels, one part vintage finds and a dash of whatever’s trending right now — at an easy-to-love price point.

Also mining their identity — as purveyors of accessible French understated chic — was Longchamp, where creative director Sophie Delafontaine looked at what a proper Gallic winter break means: physical activities and an après-ski spread.

What the Longchamp woman is packing will sound unseasonably light at first glance, going from little blousons, old-fashioned tweed jackets, skinny-rib sweaters or even long pleated dresses. But layering was the name of the fall game, with a color palette that paired bold oranges and blues of sports gear with winter warm tones inspired by the work of French designer Charlotte Perriand.

Footwear also played on city girl in the snow trope, with snow boots augmented with colorful nylon poofing up to the knee. They added a welcome playful note to a well-built classic wardrobe.

Beyond the seasonal lineup, the preeminence of the racehorse, reworked into a camouflage print, motifs used on quilted outerwear, outlined in sneakers’ soles or used for chunky metal hardware on the season’s bags nodded to the overarching idea that drove contemporary brands this season — an affirmation of brand signatures as a way to identify who their consumers are.