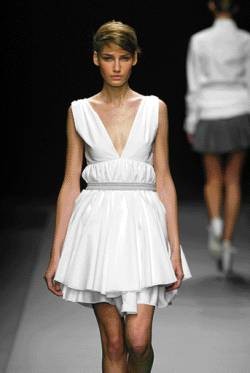 Miuccia Prada gave Hawaiian prints a preppy spin for Miu Miu, while Donatella Versace piled on the sexiness and glitz for Versace and turned Versus into a frisky cartoon.

Miu Miu: Where have all the good girls gone? Happily, they’re still around. So relax, all you moms and dads who fear spring break as one big Beach Blanket Sin in the Sun. Not all young women are in constant style heat, at least not according to Miuccia Prada, one of fashion’s most astute observers of manners and mores. Prada believes that life still offers room for discipline and discretion and that both can be oh-so-chic — even when a girl’s young and the body’s hot. After the convocation of tarts who stormed the runways of Milan, don’t you want to believe right along with her? In the delightful Miu Miu collection she showed on Monday, Miuccia played to an utterly appealing muse — part brahmin coed, part Gidget going Hawaiian — a good girl iconoclast in a world all sexed up and edged out. And did she know how to charm a crowd. This girl’s look of choice: A splashy Hawaiian print. She loves it in everything from jams to flippy little skirts to coquettish cocktail dresses, including one shirred and tied up in back like a gen-X-er’s Scaasi. While Prada kept these short and tight — her girl’s no wallflower — for the most part she preferred to let loose, literally, in clothes cut for ease, especially roomy sweaters and plenty of crisp white shirts. And she said aloha with more than her prints. Her favorite accessory, aside from newfangled spectator pumps, that is, was a plastic lei worn around the neck or cut and tied in multiple strands festooned from the waist. She makes other standards her own as well, in countless riffs on those terrific shirts, flippy cheerleader skirts with knitted hip bands and layered cut-off sweats. At times, she turns overtly playful, tying on a clear plastic leaf-motif apron skirt over briefs. She also embraces exoticism, playing into Orientalia not with a been-there skin-tight cheongsam, but with cropped Asian-style pj’s in vibrant pink and green. And to indulge her classical yen: a Greco-babydoll with just the tiniest hint of Lolita — we said she’s no wallflower. As Miuccia’s girls paraded past, the soundtrack blared a gold digger’s refrain: “I don’t love you for yourself. I love you for your money.” We loved Miu Miu for its casual grace, and for proving that, even when it comes to fashion, nice girls can finish first. Versace: Sex. Sizzle. Flash, trash, audacity, a pull-out-the-stops, let’s-have-a-ball attitude — a typical Donatella Vesace collection has all that and more. But all of that can add up to way too much, and that’s what happened in the collection she showed for spring. More than any other, the house of Versace can claim ownership of runway sexcapades. But at the end of a week during which others bombarded the runways with just about every sex trick in the book, it all became too much, which is the nature of any trend. But chez Versace, too much is more than a trend. It’s a lifestyle, the essence of Donatella herself. She revels in the world of excess and wants to share the spoils with her customer. That’s why she just launched Versace magazine, so her faithful can get a glimpse of how the rich and indulged really live. Donatella with P. Diddy in Paris. Donatella chats up Madonna. Donatella chats up J. Lo. Donatella chats up Britney Spears.And then flash to real-runway life, Versace-style: Donatella invites Britney to Lake Como, and to her fashion show. Who cares if only two weeks ago, Spears hit some small shows in New York? At Versace, she created a megamoment, all done up in massive mascara, golden curls and Donatella’s bejeweled rainbow dress. She then settled in to watch a Versace explosion of supershort, sexy, colorful and wildly wicked looks, worn with predatory confidence. Out they came: hot-pink microsuit; hot-pink trench over lime-green mini; tube-like stretches of bright stripes; peek-a-boos and asymmetry revealing more, more, more. Throughout, Donatella flaunted some good ideas: strong tailoring; a babydoll renaissance; metal mesh camis over simple, slouchy pants, and sexpot dresses for those red-carpet nights. But sometimes, the tacky side went out of control, in, for example, a pair of second-skin pants worn by Amber Valetta with “Donatella” emblazoned in golden Goth embroidery across the posterior. As the designer joked before the show, “I have a big ego.” Versace’s ego may have remained intact, but something else went AWOL — the subtle restraint that characterizes her best collections. And in the end, too much just wasn’t enough, leaving vaguely disappointed participants in the fashion orgy to wonder, “Is that all there is?”Versace led her evening’s doubleheader of shows with Versus, a witty romp that answered an intriguing question: What might Lily Munster wear on a trip to Vegas? For spring, she would have plenty to tart up in — ferocious brights and neatly riveted and zippered gear, including belted bondage pants and a cutaway buckled maillot — all to offset her massive two-tone hair and black lips.Here again, Versace went hog wild with color, whipping up her sexiest looks in poppy Candyland colors. A modish striped blazer and teeny miniskirt were streaked in screeching red and pink, a lime leather jacket was splashed with bright-pink splotches and a clear vinyl romper was the color of lemon candy. Versace drew deep from the Versus core for this one. What could be more to the point than a riot of rowdy, cartoonish clothes? While clothes built to unleash the punky vixen within certainly aren’t for everyone, some gals — Donatella’s Versus fans included — just can’t settle down.