There's more than one way to convey a stylish edge, and, for spring, designers were trying to do it with looks ranging from message Ts to restyled trenchcoats. 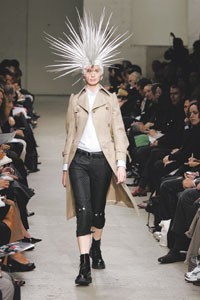 There’s more than one way to convey a stylish edge, and, for spring, designers were trying to do it with looks ranging from message Ts to restyled trenchcoats.

Junya Watanabe: If a pack of the East Village punks loitering on St. Marks enrolled at Saint Martin’s, they might turn out something like Junya Watanabe’s spring look. Watanabe’s new-school thrashers stormed the runway in some fantastic frock coats and ho-hum bondage pants.

They raised a rebel yell in dresses spliced from vintage T-shirts — rock-concert souvenirs and those promoting various small-time sports teams. They belted on the camouflage. They rampaged through Mom’s suburban closet, dragging out the shreds of clinging tweed that made their jackets. Their extreme beauty look — plasticized faux-hawks sharp as rapiers and Saran-wrap facemasks — could come with a surgeon general’s warning.

But back to those coats and jackets. What a pleasure it would be to turn down the death-metal soundtrack, lose the industrial-grade combat boots and marvel at Watanabe’s tailoring for a moment. He restyled the classic trench as a riding coat, the punk’s trusty leather as a cutaway and reinvented an army jacket as the Eton. Not even all Watanabe’s trumped-up adolescence badness could disguise their grandeur.

Vivienne Westwood: One’s got to hand it to Vivienne Westwood. She’s good at her game. At least she’s got it down pat, as the British designer illustrated with a collection based on her signature disheveled look. She called it “Active Resistance to Propaganda,” a theme she applied by printing T-shirts with, say, “I’m not a terrorist. Please don’t arrest me,” or “Branded.” Clearly, Westwood thought it important to make a statement. She didn’t pull it off, though, with her familiar dresses, skirts and jackets, cut on the bias, folded, pleated and rumpled, or with the high-waisted trousers with tousled jackets. There were some fine numbers, easy knits and tie-dye pieces that started the show, many of which purvey a very cool attitude, but one expects more novelty from this talent.

Martin Grant: Finding inspiration in Miles Davis’ “All Blues” cool-jazz standard, Martin Grant riffed on his proclivity for well-turned-out ladies in impeccably tailored clothes. The Australian designer showed a tight focus. To wit: he’s a pro with natty coats — the beige trench that started the show was a case in point — and Grant has an knack for subtle chic, as in immaculate, monochromatic pleated Empire-waist dresses and skirts in shades of, you guessed it, blue. Also beautiful, if tame, were the finely executed shirts. This fare is sure to please the likes of Lee Radziwill, one of Grant’s most faithful clients, who watched approvingly from the front row.

Girbaud: Studying the complicated maze-like runway that Girbaud built to present its clothes, one wondered if it would be hard to grasp the message. But it came across simply: The brand, now designed by Claire Campbell, is feeling romantic. That meant flowers appliquéd on T-shirts and jackets, laser-cut floral patterns, ruffled skirts and filmy dresses. Fabrics were washed, rumpled and twisted. Hems were frayed. And embroidery abounded. As for the jeans, they were worn, washed and embroidered, too.

Issey Miyake: Designer Naoki Takizawa has a soft, poetic sensibility. For spring, his clothes were fit for an exotic, island-themed journey. Dresses had fringes, or were pleated and gathered, and raffia details were applied to tops, or woven into skirts and dresses. Takizawa even confected a bustier and skirt of bamboo. But overall these were clothes to be worn, with neat jackets that gathered in back, slim trousers, cool pleated skirts and tops.