Dark, somber looks aren't the only game in town. 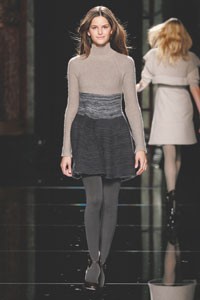 Dark, somber looks aren’t the only game in town. Think chic, sophisticated, real-life clothes and airily beautiful ones, for instance.

Yves Saint Laurent: On the one hand, defiant alternatives to overt trend mongering are essential, and Stefano Pilati deserves praise for picking up that mantle. His still-in-development vision for Yves Saint Laurent is that of a house dedicated to grown-up, sensible sportswear. Quirky blouses done up with pert jabots, and tulip skirts aplenty are just the sort of fanciful, dressed-up daywear that should keep Pilati’s fashion-y clients plenty pleased.

On the other hand, he has yet to find his comfort zone. The collection he showed for fall bore no visible connection to the work of Saint Laurent the man, and was weighted down with a feeling the French would call lourd — heavy. Weighty fabrics and some too-obvious decoration made for heaviness of mood and appearance, delivered with precision polish that looked — probably unintentionally — more than a bit Eighties.

He cut thick tweeds in well-rounded jackets and balloon skirts. He trimmed oversize coats with spiky black spines and stiff minidresses with lengths of slinky gold chain. There was more gold to be found, flecked in the hem of a mini or tiled into eccentric Egyptian-esque evening tunics, which were worn over matching sheer pants. The finale: a hot pink number worn with a cape of roses. Too often the complications superseded the chic. But one sensed that beneath the stiff pomp lurked a chic collection struggling to fight its way out.

Rochas: Olivier Theyskens lives by an ethos of calm — something of an anomaly in fashion. That tranquility manifests itself dually in his work, both in his pensive, graceful aesthetic and in the manner in which he has chosen to develop the Rochas business.

While much of his competition jumps from one seasonal theme to the next, Theyskens has been content to refine the gentle melancholia that has become his signature — and which, by the way, has turned into a major influence. At the same time, he started getting serious about day clothes only last season. For fall, he developed them further, while delivering his signature moodiness sans the aggression seen elsewhere.

The first model out carried a small black ladder, her hair held back by a lattice headband — thus announcing the collection’s inspiration: the world of the chimney sweep. Yet Theyskens is hardly one to let concept trump fashion; thus, he avoided costumery, and drew from the motif a palette of black, grays and dusty blues and practical sober shapes. He added to his daytime repertoire beautifully (save for uncharacteristically silly bicycle shorts) diversifying spring’s reed-thin pantsuits and adding a more feminine element in short dresses and fluid coats, as well as a hint of the morning light in snippets of pearly grays.

By night, he continued his brilliant antivulgarity argument with gorgeous gowns, including two printed with tiny, resting blackbirds. Yet while there is something wildly appealing in Theyskens’ leisurely path, this collection had a hint of transition to it, as if his next major development were percolating beneath.

That, said, why rush, when the process is so exquisite? Exiting the show, two Brit “It” girl types were all but overcome by the beauty of a particular look — most likely the gray gown with a skirt that drifted with a cloud-like flourish. “Let’s both get married,” said one. “We can share the dress.”

Stella McCartney: “Everyday sophisticated dressing,” was the way Stella McCartney’s show notes described her fall collection. As a fashion goal, it might sound like a no-brainer. But in a season of high-statement Goth, McCartney’s terrific — terrifically real — clothes played like a breath of fresh air. It was her best collection yet, polished and with an easy chic all its own.

McCartney is thinking in an overtly practical way. Following her own wardrobe-boosting instincts instead of relying on pretentious gimmicks, she turned her personal cool into a ton of chic sportswear. The look was grown-up but not stuffy, and worked the house signatures to perfection. Knits chez McCartney are high on the list of priorities and included hearty, oversize draped cardigans, slouchy minidresses, lean numbers, Empire-waist dresses and on and on. Coats were given just as much play. A belled gray coat with cable-knit sleeves opened the show, and plenty of others followed. Eveningwear was graphic, whether a knit minidress slicked with transparent sequins or taffeta dresses bordered with stripes. Fashion-y weekend gear included super-skinny denim riding pants worn with a tailored cashmere coat in cobalt blue.

And Stella’s right. These are clothes to live in.