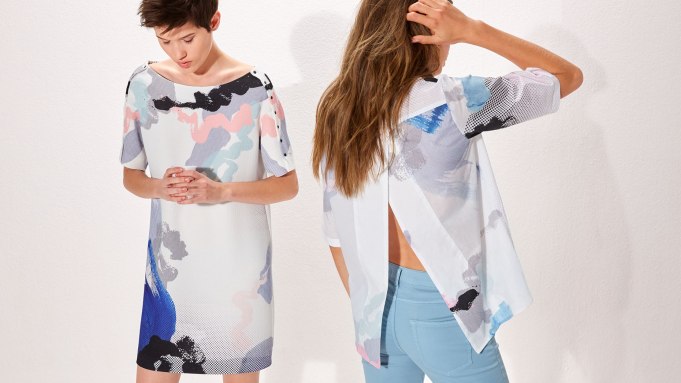 Mosaddegh is an ophthalmologist who was a loyal shopper of the brand and is now overseeing the company’s efforts to grow in the U.S.

“It’s moving along well. This has been mainly organic [growth],” Mosaddegh said of online traffic, pointing out that a greater social media presence would help push sales even further. “In this day and age, a lot of people just don’t go in boutiques anymore.”

Cop Copine currently counts two stores, one in Pasadena and the other in San Francisco. It’s looking at additional locations in Los Angeles and New York.

“Parisians in general, the ladies, for example: a more mature lady doesn’t mind wearing dresses that are above the knee and the U.S. market, in those aspects, it’s a little bit different,” Mosaddegh said in connecting a French brand to a U.S. audience. “Our line doesn’t discriminate against age, but sometimes the ladies could be a little bit conservative [in the U.S.]. People who are attracted to our line have very European taste. It’s been fascinating because when we started in San Francisco at first glance, people would think we were for the younger crowd, but it goes anywhere from teenagers to late 20s all the way up to 60s and 70s.”

The line is designed in Paris, with more than 95 percent of it made in Europe and more than 150 boutiques globally.

“When I used to buy [from the brand] for myself in Europe, my term for this line was ‘intelligent chic,’” Mosaddegh said. “This is for the lady who is smart enough and knows the value of her dollar and wants to build her wardrobe. It is not disposable clothing. Cop Copine is basically going back to the future. They don’t make [the designs] too trendy so that you can build your wardrobe. I can take a piece from five years ago and put it with a piece from the new collection and no one would know.”

The physician is a longtime customer who would shop the contemporary brand’s stores well before she became its U.S. ceo while in Paris doing her wardrobe shopping for the year.

“I like design, fashion, architecture and photography and with all those interests, I wanted to always do something related to the artistic side of my brain,” she said. “Because I get so busy with medicine and running my [three] offices, I said to start and design something myself would not be possible, so I felt like I wanted to join forces with an established brand.”

She met with the owners of the family-run business and brought it to the U.S., locating the company’s Stateside headquarters in San Francisco where her practices are located. In 2009, the company opened its first boutique in San Francisco’s Union Square, followed by a distribution center in Marin County. The Los Angeles showroom opened a little less than a year ago, with the company now shopping for a New York showroom.

“When the purpose is higher than oneself, it’s an amazing drive,” Mosaddegh said of balancing her two seemingly separate careers.

She sees the link though between medicine and fashion, with a portion of the company’s proceeds going to eye care services to those in need in San Francisco. Mosaddegh is currently in the midst of building a vision institute in San Francisco on land she purchased a few years ago.

“We can give back in different ways,” Mosaddegh said. “We don’t have to be boxed into one facet of giving back.”

Makers Mark: How Artisanal L.A. Is Helping Bring Lifestyle Back to Retail

At American Giant, a Different Point of View