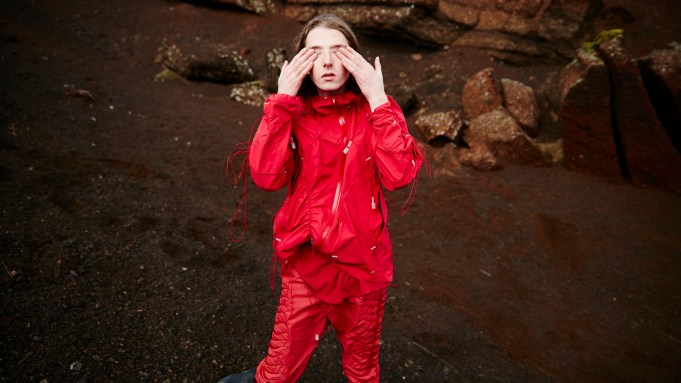 For brands, the Danish capital seems to fit into a natural void left by the major fashion capitals. “When you think of fashion, you think of the four big ones,” said Stavros Karelis, founder of London-based concept store Machine-A and buying director for Showstudio, who curated an installation at the Copenhagen International Fashion Fair. “But I think we have reached a moment where people are looking outside the current systems because, yes, it’s great to be in London, Paris, [Milan] or New York, but there are so many markets around. Seoul, Shanghai, here. It’s nice to explore new territories.”

Copenhagen’s fashion week, which ended Feb. 2, unfurled against a healthy backdrop. In 2017, total exports of Danish fashion rose 5 percent to 28.7 billion Danish kroner, or $4.8 billion at current exchange, while domestic turnover grew 2 percent after experiencing a lackluster 2016, according to figures from the Danish Fashion & Textile trade association.

Among the country’s key foreign markets are Germany (14 percent growth, to 9 billion Danish kroner) and the Netherlands (13 percent, to 2.6 billion kroner). Former key markets Norway and Great Britain continue to experience the effects of currency headwinds, and in Britain’s case, Brexit.

This marks a fifth year of growth for the industry as a whole, now culminating at 45 billion Danish kroner, or $7.5 billion.

At CIFF, this also meant designers were paying homage to their roots in a variety of ways. At the DIY Chair workshop, visitors could hand-make and personalize their own copy of a chair imagined by designer Max Lamb and with input from Off-White’s Virgil Abloh. According to the trade show’s fashion and design director Kristian Andersen, it was “almost a way to honor Danish design, although [the resulting design] was a very affordable chair at 12 dollars a-piece.”

For 2017 Royal College of Art graduate Arnar Mar Jonsson, who was selling his graduate collection at the trade show, the attraction of Copenhagen was its nurturing and growth-fostering mind-set. “Everyone is understanding. If you go to Paris, you have to dive straight in. Here, people are buying into the concept,” said Iceland-born Jonsson, who blended sportswear and sports jerseys into a collection where rip-cords and geometric stitching served as a main motif.

Labrum’s Foday Dumbuya spent his formative years in Sierra Leone, Cyprus and later, London. He blends British tailoring, workwear and what he calls an African touch in a collection that looks at once utilitarian and readily identifiable. Likewise, Amir Hassan, whose Twelvepieces brand sold out of its spring 2018 collection on its web site with little promotion, nodded to the air route between Denmark and Egypt, where his family originates, in a collection of neat yet laid-back separates produced in limited runs of 12 (hence the brand’s moniker).

Coming full-circle was London-based, Danish-born Haerwerk. Royal College of Art alum Niels Gundtoft Hansen showed a lineup that might be described as Lego-meets-Nineties movie “Kids.” His primary colors and tarpaulin-covered outerwear would look at home in Copenhagen’s anarchist Christiania district.

Also in the edgy Raven section of the fair, hit Japanese chain Beams and its cultural engineer Tatsuo Hino were present to showcase three brands selected by the retailer to represent Japan at CIFF: functional workwear-for-creatives clothing brand Teätora, poetic textile men’s and women’s line Noma, and accessories brands Itti (pronounced it-chi). “It is a place where conversations happen, where we spend quality time together,” said Hino.

On the fashion week’s runway schedule were foreign returnees such as Holzweiler (Norway), Uniforms for the Dedicated (Sweden) or Dutch collective Reconstruct, but also first-time visitors such established Swedish brand J. Lindeberg. For this historically sports-oriented brand, it was the second collection by artistic director Jens Werner, a self-taught alum of Tory Sport and the Adidas design studio where he worked on Y-3 and collaborations with Raf Simons, Juun. J or Kolor. Taking the brand’s sport-meets-fashion roots to heart, Werner showed the gamut of tailored outfits to performance activewear and eyebrow-raising synthetic leotards, showcasing blue puffer jackets; form-fitting sweaters emblazoned with “No après ski party” in loud but tone-on-tone lettering, and Prince of Wales checks that looked good on suits for men or women and even better as streamlined coats.

Mathilde Torp Mader, incoming head designer of By Malene Birger, eschewed a traditional show for her debut collection at the helm of the well-known Danish brand. Guests were seated in front of giant screens, where a film depicting the mood of the season was projected. It was a little hard to latch onto any details, but a showroom visit highlighted Torp Mader’s work on “defining the signature of the brand, and what the brand will be known for going forward.” To achieve this, she focused on outerwear as pieces worth investing in but also daywear items.

The designer’s own proclivity for tailored army coats came through in the marked shoulders and pared-back shapes. “When you’re dissecting vintage clothes, army gear is amazing. Their approach to rtw is that everything has a function, and it’s really inspiring,” said Torp Mader of a lineup that included strong tailored blazers, flirty T-shirt dresses and an army print that had been reworked to resemble leopard spots in floral colors.

Men’s wear wiz Martin Asbjørn showcased a “Teenage Dirtbag” collection inspired by the Nineties yet studded with Seventies accents, nodding at the inevitable blending of one’s seminal decade with parental influences. Doc Martens with vinyl stickers and custom laces competed for attention with cunningly cut leather patchwork trousers and skinny cherry red bomber jackets. It was a mélange that sounded risky and awkward but in reality, hit all the relevant notes of the season.

New talent was one area particularly highlighted throughout, with the New Talent Scene and Designers’ Nest catwalks opening the fall 2018 edition. “On one hand, we are growing stronger looking through a Scandinavian outlook, and on the other we are good facilitators of new talent. We hope we can find these little diamonds in the rough and help them shine,” said Copenhagen Fashion Week’s chief executive officer Camilla Frank. “Being ready for here is a good start. [These brands] need to show they can make a business and make it grow.”

“Copenhagen has been rated as one of the most livable cities in the world, and there is a need from people around the world to get this experience. If you like that experience, you also adopt how you dress, how you look in this region. That’s not the latest fashion, as described by superbrands, but it seems friendly and fashionable,” said CIFF’s Andersen, who credits this slower way of life as the reason why prominent fashion figures come to the city, such as MM6, which created a diorama, or Abloh, who took part in the CIFF chair project and later took over local youth hot spot Arch for a party that had people queuing around the block.

For Pernille Møbjerg Knudsen, cofounder of jewelry trade show The Jewellery Room, an exceptional density of talent coupled with “a daring to do things that are a bit different and quirky” are the keys to Copenhagen’s lasting and attractive design aura. “We don’t have a traditional tradition for jewelry,” Møbjerg Knudsen said. “Perhaps that’s why we dare to be playful, and why all Danish design is so.”

It’s an opinion shared by CIFF’s Andersen. “Denmark has a long tradition of furniture and social design. That is something that drew attention to the country. Copenhagen doesn’t have a long series of international runway shows, but it is a trade platform,” he said. “It would be too uninteresting if it were only trade.”

The CIFF trade show is planning to add Paris to its yearly schedule, with an edition planned for June 20 to 26 during the French capital’s men’s wear spring 2019 shows.

“Innovative, and accessible,” is how Frank described the Danish capital’s week of fashionable events.

The schedule was rife with initiatives aiming to bring trade and consumers closer than ever. Frank outlined the focus on widespread sustainable practices — such as doing away with the print version of CFW’s daily newspaper — but also on open-house initiatives for the public, such as a sustainable market or a “front-row auction” of items donated by prominent guests. Both of these will take place from Feb. 10, and profits will go to Save the Children.

That Copenhagen has become a destination in itself was made clear by Ganni’s pop-up Souvenir Shop, which offered its wares outside the brand’s show.

Ditte and Nicolaj Reffstrup, respectively creative director and ceo, commissioned Serbian-born, New York-based artist Ana Kras to capture snaps of Copenhagen scenery — bicycles, statues, military parades — which were then used for a range of kitsch items the duo described as “an artistic bordering pastiche point of view of Copenhagen.” Lint rollers could be snapped up for 89 Danish kroner, or 14 dollars, while a floral scrunchie was 139 DKK ($23). Posters, bottle openers and T-shirts, going for 499 DKK ($84), were emblazoned with the artist’s take on cliché souvenir photographs.

Ganni’s souvenir concept will hit New York in a yet-undisclosed location from Feb. 8 to 16, before concluding in London’s Selfridges department store where it will run from Feb. 14 to March 7.

On Friday, for the final day of the trade shows, The Jewellery Room marked its tenth edition with the launch of its e-commerce platform where consumers will be able to snatch a selection of designs curated by Møbjerg Knudsen and sister Charlotte Møbjerg Ansel-Henry.

Among the brands represented on the platform are historic jeweler Ole Lynggaard, established contemporary brands such as Jane Koenig and newcomers such as Josina, Pernille Lauridsen or Unspoiled Jewels. Founded by brothers Patrick and Philip Payberg, and childhood friend Nick Philip Engel, the latter line features maps which can be studded with a minute diamond to symbolize a meaningful location. Designs include signet rings and medallions engraved with maps of continents as well as countries, in silver or gold.

On the innovation front, Copenhagen serves as a sounding board where brands test their newest ideas.

Outside the Bella Center convention halls where CIFF is held, Amsterdam-based knitwear studio Byborre was showcasing their latest wares in a minuscule trailer fitted into a mobile showroom. Samuel de Goede, who holds the unusual title of chief pocket officer of the brand, pointed out the seemingly simple but ultimately complex techniques that allowed gradients, custom messages, fabrication dates or even a manifesto to be inserted into the patterns of knits. For those without a nerdy interest in knitwear, the delicately hued multipocket hooded gradient parka, zippered jacket or flecked mittens looked nifty even without knowing how they were made.