COPENHAGEN — Copenhagen fashion girls, with their flair for pastel dresses, flip-flops and dreamy prints, have been building momentum around the Danish capital’s fashion scene for a few years now, luring more and more international buyers and press to its biannual fashion showcase.

But beyond candy colors and Instagram buzz, Danish labels have managed to quickly build thriving businesses, putting Copenhagen Fashion Week on the map as a regular pit stop for every major buyer’s calendar.

“Copenhagen has been a growing market for us for a few years now. We actively look out for new brands [here] and it’s now a regular fashion week visit next to the major fashion cities,” said Tiffany Hsu, fashion buying director at Mytheresa.com.

Ditto for Net-a-porter, which stocks 20 fashion labels heralding from Scandinavia. “Copenhagen has cleverly offered the industry an intimate showcase of emerging designers that feels like a discovery, while still managing to be respected as a key fashion week in the calendar. Seeing the growth of Ganni, Cecilie Bahnsen and Stand has meant they have become the anchor brands of Copenhagen Fashion Week, giving industry insiders a reason to keep returning,” said Libby Page, senior fashion market editor at Net-a-porter.

The spring 2020 showcase, which took place Aug. 6 to 9, highlighted Scandinavian designers’ ability to sustain this growing momentum and hold on to the industry’s interest by evolving their collections, tapping into new categories — and also putting on shows to remember, with many a runway turning into joyful dance parties.

As Oslo and Stockholm fashion weeks have been canceled, Copenhagen’s influence as the newfound hub of Scandinavian fashion is bound to increase.

“Scandinavian brands are here and they’re happy, the attitude, is ‘Let’s do this together,'” said Copenhagen Fashion Week’s chief executive officer Cecilie Thorsmark, who has also been making waves on the sustainability front.

Only a year after taking on the role of ceo, Thorsmark has introduced the banning of single-use plastic bottles during the showcase and is plotting the launch of a three-year plan later in 2019 “to introduce new standards for the participation in fashion week in order to push the industry in a more responsible and future-proof direction.”

“We want to set standards high and allow brands three years to be able to work toward them. We don’t want to exclude brands by setting these standards too high straight away, because you’re not doing any good by exclusion,” Thorsmark added.

“The energy and dedication to leading innovation on sustainability makes CFW stand out from the crowd. The city is firmly on our map and I love how it’s gaining cult status, it’s a real one-of-a-kind fashion week experience,” said Browns’ buying director Ida Petersson, who singled out labels Sunflower and Helmstedt as the most promising young names.

The city’s regular darlings, from Ganni to Stine Goya, Cecilie Bahnsen, Rotate and Saks Potts, also stood out — and demonstrated their potential to sustain their growth and compete on a global level.

Rotate, which started with six dresses shown in an intimate presentation a mere 12 months ago, this season threw a big, circus-themed show to end the four-day CFW with a bigger, more confident range that included an array of silhouettes and fabrications, from maxi dresses with dramatic ruffles to body-hugging numbers done in feathers or cool tweeds.

“We felt we had so much more to give and show now, the collection is always evolving,” said the Rotate design duo Thora Valdimars and Jeanette Madsen.

Over the last year, Rotate has built a network of key stockists, including Net-a-porter, Moda Operandi, Browns and Selfridges, and the plan is to begin introducing new categories, starting with separates in November.

“We want to develop the brand at a pace that suits the women who buy the product. From a commercial perspective, we could add anything but we want to do it cleverly so that the customer continues to trust us,” said Denise Christensen, ceo of the Danish retailer Birger Christensen, which is backing the label and is a big advocate of creating brands at contemporary price points — another Danish strength. 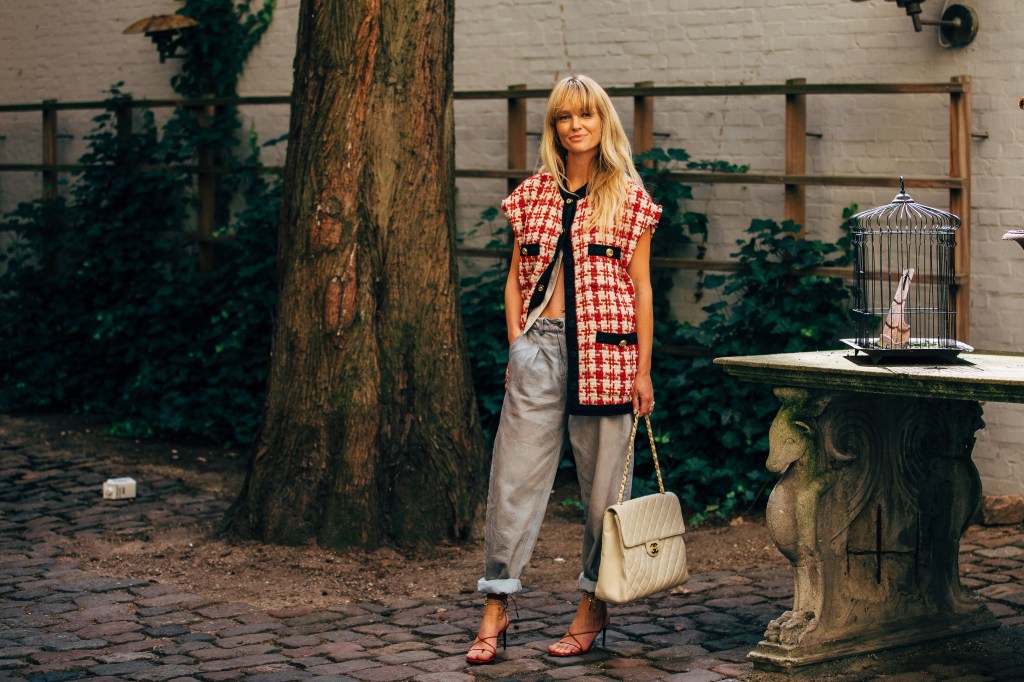 “From my experience as a retailer, I can see that it’s a very small fraction of customers who can buy into luxury brands. We want to be accessible for working women,” she added.

Earlier in the day, Ganni celebrated 10 years by shining the spotlight on the ethos that helped the label shoot to fame in the first place: Fuss-free clothes, colorful mish-mashes and pure fun.

Models paraded down a tennis court in slinky satin dresses, leopard-print blouses worn over a logo-print dress and bold cowboy boots — next season’s footwear sell-out, according to buyers — as the band MØ performed. When it started pouring rain, models, performers and guests danced their hearts out instead of running for shelter.

“The Ganni girl is grown-up now, but she’s still all about colors and feeling comfortable in your own skin, that’s the message we wanted to pass,” said Ganni designer Ditte Reffstrup, highlighting that she plans to hold on to these values as the label continues to grow. With backing from L Catterton, it’s readying for a slew of international store openings in London, New York and Los Angeles.

Stine Goya, best known for its dreamy dresses, was another highlight: A diverse, cheerful cast of models wore an even bolder concoction of colors and prints than previous seasons, which had both a romantic and powerful feel to it.

“We wanted to renew all the prints, make them bolder, crazier and put them together in the most expressive way,” said Goya.

The label’s brand of joy, femininity and accessible price points has been resonating with retailers across the globe. Goya is looking to take the next step forward, hiring an accessories designer to broaden her collections and brainstorming ideas for a new retail concept in London.

Cecilie Bahnsen continued to charm the fashion crowd with her signature puff-sleeve, open-back feminine dresses, but added her take on tailoring to the mix to move things forward. It came in the form of pastel-hued slim suits with long layers of organza layered over blazers.

“We have looked at Cecile Bahnsen for several seasons now and are very excited to be stocking her collection from spring 2020 forward. She has a really clear point of view and this season I was really taken by her intricate white see-through suit,” said Hsu, who also picked up Stand’s signature leather outerwear and Baum und Pferdgarten’s sheer looks for Mytheresa.com. 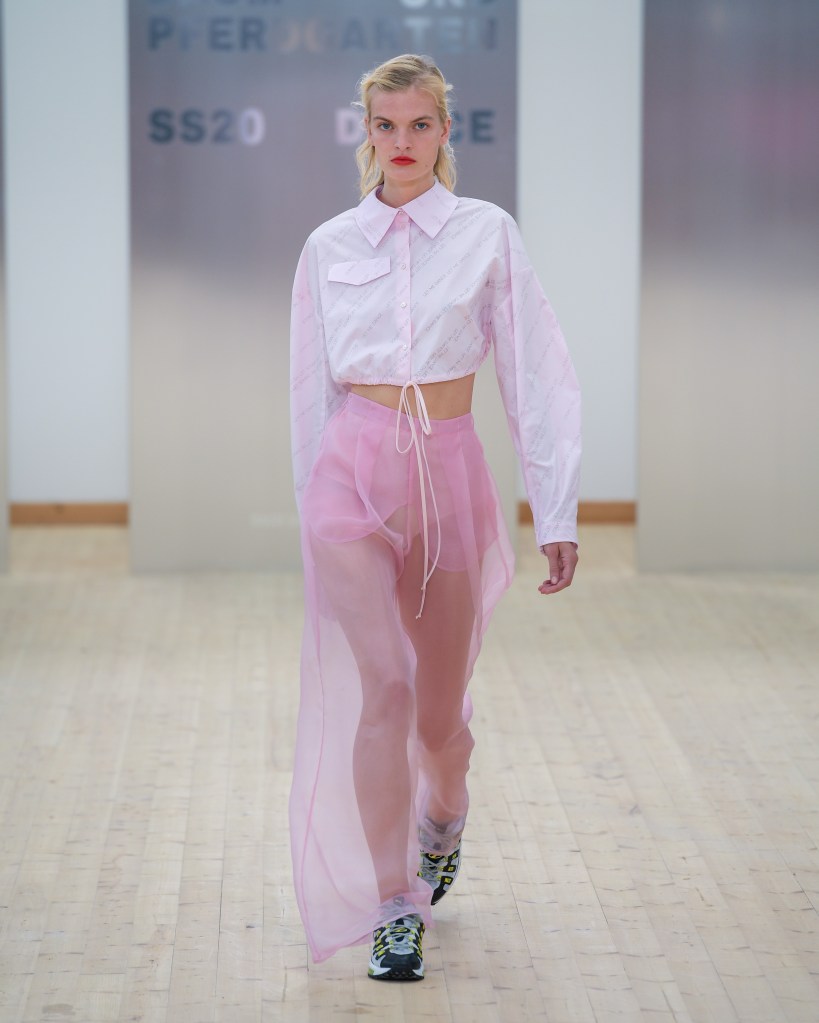 Saks Potts also demonstrated its ability to keep moving forward and flex its muscle far beyond its signature coats, with a collection dipped in Nineties nostalgia that included crystal-encrusted denim, fur bombers and vinyl trousers galore. The show took place in the city’s concert hall, with an orchestra playing in the background.

“We worked hard to create all these new light, outerwear pieces and add more ready-to-wear. We want to create a universe,” said Barbara Potts backstage, also pointing to the debut of the label’s first footwear collaboration with Danish footwear brand Ecco, which came in the form of logo cowboy boots.

Apart from bold colors and prints galore, this season Copenhagen Fashion Week proved that it can deliver a broader offer with an array of labels that mastered the art of modernism, in new and exciting ways.

Leading the way is By Malene Birger creative director Mathilde Torp Mader, who took over the label last year and quickly managed to renew its relevance. For spring she continued to build on the elegant foundations she laid out from the get-go with body-hugging net dresses, loose tailoring and a splash of Sixties-inspired psychedelic prints. 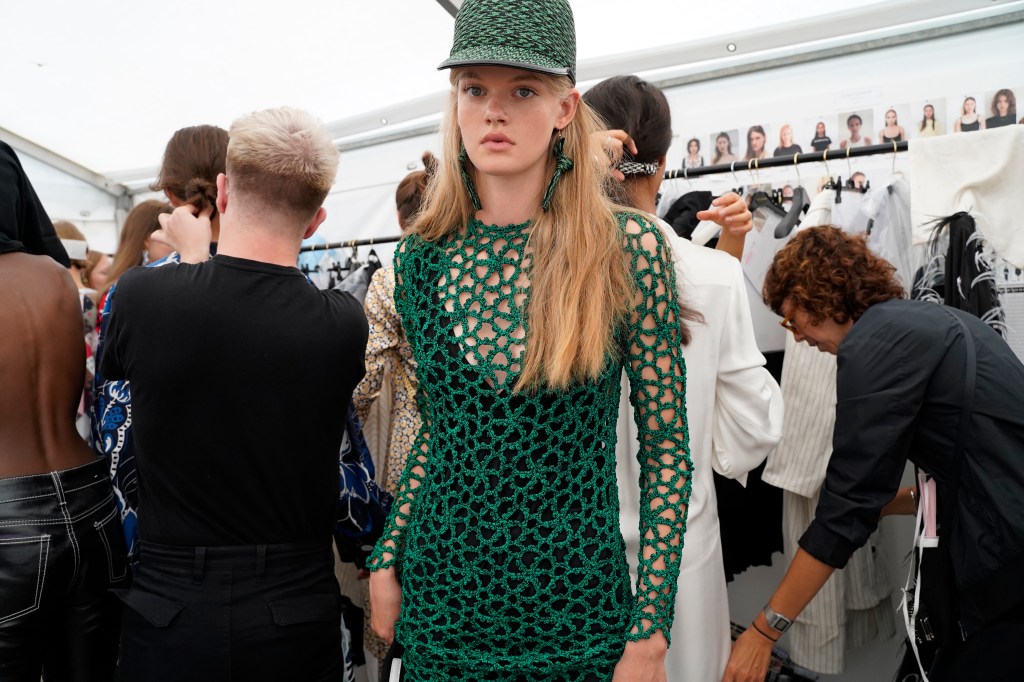 “It’s been about working to gain people’s trust and daring to go a little bit further every time,” said Torp Mader, also pointing to the new raffia satchel bags she added, which have helped kick-start the label’s accessories business.

Rodebjer served up an array of stylish pieces that can fit into “a working wardrobe,” from the ideal trench to maxi cotton dresses featuring long fringes, flowy tunics and quilted coats.

“I want to be a part of women’s everyday lives, that’s why we want to offer very wearable ranges,” said designer Carin Rodebjer, whose brand is also seeing steady growth with new stockists including Le Bon Marché, Isetan and Nordstrom.

“You attend shows here for the clothes, not because it’s a big name brand or to get photographed and become a bit more famous. Brands offer something different: The clothes are styled so well but there’s more reality to them,” said influencer Doina Ciobanu, who is known for using her platform to champion sustainability. 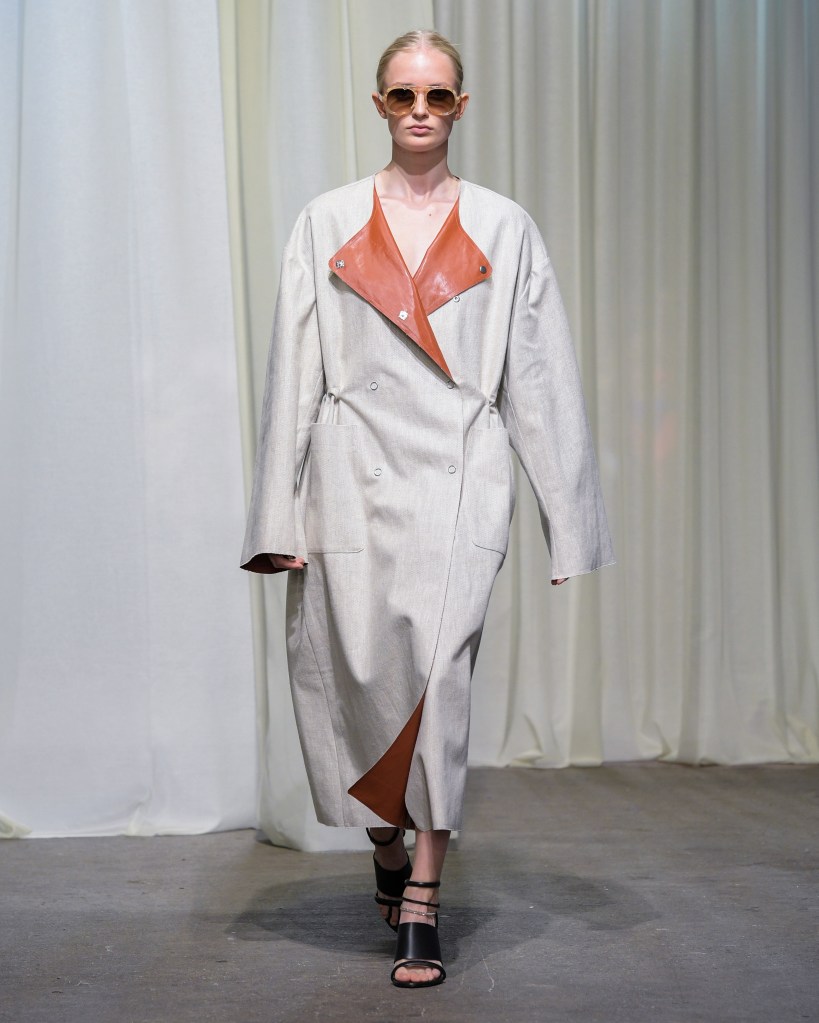 “The most exciting part is the brands’ approach to sustainability, it shows that fashion can be amazing but can give a damn about the planet, too,” she added, pointing to Holzweiler’s efforts to use leftover fabrics from previous collections to design accessories and avoid all single-use plastics backstage.

“Relaxed sports-luxe at Holzweiler and elevated daywear styles at By Malene Birger stood out for us. They both encapsulated everything our customer is looking to wear right now, such as cargo shorts, utility jumpsuits, cycling shorts and Hawaiian-style shirts,” said Libby Page, senior fashion market editor at Net-a-porter, also pointing to the trickle-down effect of minimalism on Copenhagen’s street style.

“Leather culottes — the next big hit — white tank tops, gold-chain necklaces, anklets and the crisp white shirts all adorned the streets, which is so much more unexpected for Copenhagen,” Page said. 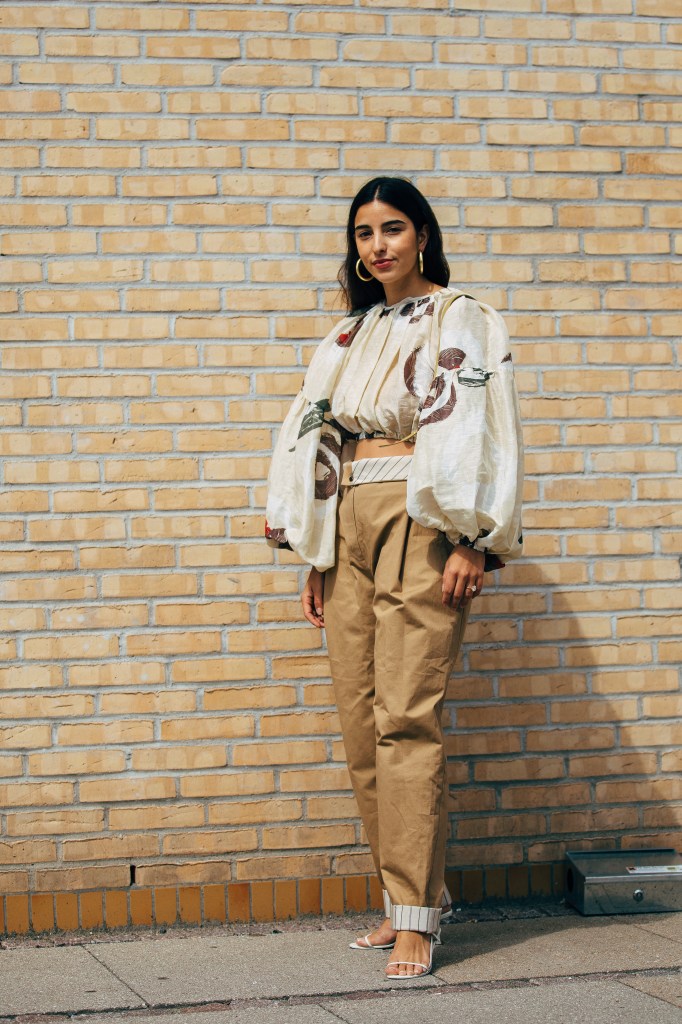 The city also has a strong trade show business, with the Copenhagen International Fashion Fair among the key destinations.

For its 53rd edition, CIFF gathered some of the top international emerging talents — including two LVMH Prize short-listed designers, Stefan Cooke and Kenneth Ize of Nigeria — to present a series of creative projects around the idea of unity and inclusivity.

“Curating a space that is visually stimulating while it creates a degree of engagement for the visitors, with important causes such as education, innovation, sustainability, craftsmanship, social issues, equality, reality versus VR, EU politics, is a way of understanding the ever-evolving and rapidly changing environment we currently experience in our fashion system,” said Stavros Karelis, the show’s creative director and founder of popular London boutique Machine A.

The fair plans to continue experimenting with more engaging formats, expand into sportswear and showcase in new territories, including Los Angeles and Asia, following its Paris debut this year.

“The traditional trade show format as it is is dying, but I think the need for trade to meet personally is still very much in demand,” said Kristian Andersen, chief innovation officer of North Modern, the parent company of CIFF.

The Jewellery Room is another showroom to note. It showcased the works of up-and-coming Danish jewelers, as well as those of the country’s big players such as Pandora and Georg Jensen.

The challenge for young jewelers is finding the right buyers, according to the showroom’s cofounder Pernille Møbjerg, which is why The Jewellery Room has gotten funding to build its own e-commerce platform and plans to put a bigger focus on its direct-to-consumer efforts.