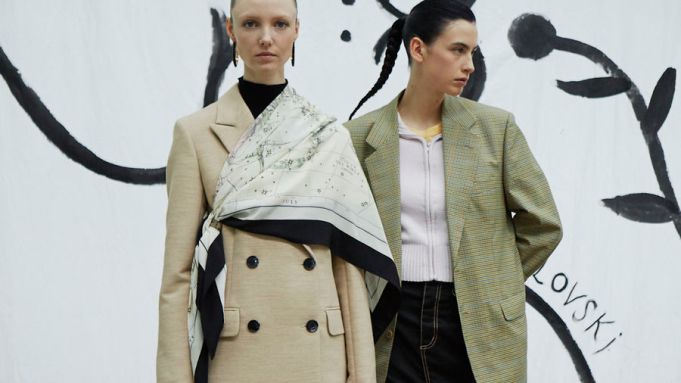 COPENHAGEN — Is the Copenhagen fashion bubble ready to burst?

The Danish capital first gained global traction for the colorful, exuberant vision of its designers. The image of the Copenhagen girl riding her bike in sneakers, sparkly hair accessories and an extra-loose, candy-colored dress turned into an Instagram sensation, luring international buyers, influencers and press to the biannual event.

Like all things viral, the look reached saturation point and after a while began to seem dated and cartoonish.

Luckily, the Danes have a lot more to offer on the fashion front than that one image. For fall 2020, Copenhagen Fashion Week, which is now Scandinavia’s only fashion event, has proven its relevance with a broader offer, some promising new names and a benchmark-setting approach to sustainability.

Tiffany Hsu, Mytheresa.com fashion buying director, said the appeal of Copenhagen Fashion Week was never about Instagram buzz alone. “Danes have always been known for their understated chic, especially when it comes to interior design and architecture. At the same time you have brands like Rotate, which are consistently bringing out fun and bold party dresses.”

The week’s winners were the brands that set Instagram trends aside and stayed true to themselves.

“I found a book with a lot of portraits of [Guggenheim] toward the end of her life, where it feels she’s really come to herself, she’s mixing her clothes and just doesn’t really give a s–t. You get this sense of the woman in her own self and that’s the message we wanted to communicate that you don’t have to look a specific way,” said Torp Mader, who cast female creatives of all ages to walk the show, Erin O’ Connor included. “I wanted them to look like they meant business.”

Her feminist, understated approach could fill part of the gap left by Phoebe Philo’s Celine, albeit in the contemporary market.

The brand’s formula is straightforward: Wardrobe staples with a fashion twist at a very competitive price point.

That formula has lured an array of major retailers ranging from Net-a-porter, to Browns and Selfridges, who bought into the brand’s chic leather Bermuda shorts, trenchcoats and pencil skirts.

For fall, Denise Christensen, chief executive officer of Birger Christensen, who came up with the idea of Remain, wanted to broaden the offer and ensure that the label is perceived as “much more than a leather brand.”

That’s why it offers loose tailored suits in biscuit tones, embroidered denim jackets, shearling-collar shirts and stunning gingham co-ords that will likely cause a retail storm.

“We just thought we’d start with five key partners but the demand we’ve experienced has been unprecedented. There was a place for it in the market, just like with Rotate,” Christensen added.

Even though there is a newfound love for all things understated and minimalist in Copenhagen and beyond, the appetite for decadence is still there and Birger Christensen’s second label, Rotate, delivered it in the best way possible: Mini party dresses, sparkly pouches in the shape of flasks and a hefty dose of attitude.

The brand, which is designed by two of Denmark’s biggest influencers — Jeanette Madsen and Thora Valdimars — is quickly becoming the week’s headline show. Lyst singled it out as one of the fastest rising brands in terms of online search — even stealing some of Ganni’s steam.

For fall 2020, the collection expanded beyond its signature minidresses to include more separates such as trendy snake-print pants, cutout tops and cropped leather jackets to wear over the dresses.

Saks Potts, which skipped the runway in favor of an intimate presentation of its pre-fall collection at designer Barbara Potts’ apartment, delivers similar excitement with its flair for all things maximalist. Its latest collection played with Nineties references, with shimmery pink minidresses, patent leather iterations of its signature “Foxy” coat and logo-print separates.

Another standout was Stockholm-based Stand Studio, which is primarily known for its high-quality, accessibly priced outerwear. For fall the brand delivered plenty of those but also broadened its offer with fun, Eighties-inspired ready-to-wear, as in a shiny leopard-print mini number, sequin jumpsuit or floral evening dresses.

While many designers embraced the party spirit to good effect, the major theme that emerged from the week was one of extreme comfort, with layered knits, cocooning scarves and easy-going pieces suitable for every day taking over most labels’ runways.

“It’s not costumes, I make clothes and I want everything to feel like something you can imagine wearing. It’s about having this moment where you celebrate women,” said By Malene Birger’s Torp Mader.

Swedish designer Carin Rodebjer, who presented a lineup filled with cozy knits, long puffer jackets and loose maxidresses, echoed her thoughts: “We do elevated reality, I want to stay in reality and just elevate it. That’s what I want to stick to, it’s my niche.”

Cecilie Bahnsen, whose puff-sleeve dresses continue to delight, channeled this feeling of ease and extreme comfort by pairing her signature dresses with sneakers and layering them with cozy ruffled knits or more boyish parkas, created in collaboration with Mackintosh.

“We wanted the collection to be even more wearable and to have this Nordic, Scandinavian vibe that you’d put a big raincoat over your dress to protect it,” Bahnsen said backstage.

At Holzweiler, comfort was also at the forefront with blanket-like scarves, loose boiler suits, extra-large puffers and knits layered on top of each other.

“The collection explores the many facets of country living in Norway, from the knitted soil patterns to fossil prints, whilst incorporating thick tactile fabrics made for durability and function,” said the label’s head of design Maria Skappel Holzweiler.

According to Mytheresa’s Hsu, it’s also worth noting the “black is the new black” trend that emerged from the catwalks and will likely continue throughout the rest of the season. There was an array of all-black leather looks across the board and Ganni, which has mainly been known for its clashing prints and bright colors, led the way with a collection punctuated by black suits, black knit dresses and plenty of black leather midi skirts.

Among the newcomers that showgoers are keeping an eye on were Swedish-Eritrean designer Zelam Fessahaye, whose collection was brimming with a fierce attitude, sculptural silhouettes and decadent fabrics; as well as Rains, a brand known for its raincoats that is now looking to extend its vision to a full lifestyle proposition, from puffer coats, to boiler suits and loose track pants made in technical, waterproof fabrics.