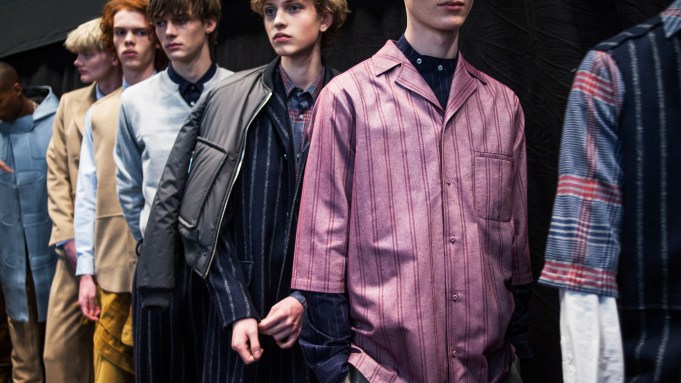 COPENHAGEN — Danish men’s wear is having a moment.

Buyers praised the region’s labels for their good price, sustainability component and cool edge at Copenhagen Fashion Week, which ended its three-day run on Feb. 5.

An upbeat mood prevailed given that exports were up, especially to Germany and the U.K. but also France, Spain and the U.S. Total exports of Danish fashion rose 6 percent in 2015 to 26.3 billion Danish kroner, or $3.91 billion at average exchange for the period. For the first time since the 2007-08 crisis, domestic sales were up, posting a 2 percent increase at wholesale in 2015.

While women’s wear still represents the lion’s share of the business — 30 percent for men’s wear and 10 percent for children’s wear make up the balance — the men’s segment is posting the fastest growth, said Michael Hillmose, head of international affairs of Dansk Fashion and Textile, the trade association for Danish textile and clothing companies.

“There was a lack of men’s wear brands in the last couple of years and we see a comeback today. If you go to CIFF, there’s a large men’s wear department,” Hillmose said, referring to Copenhagen International Fashion Fair, one of the two trade fairs that the region offers alongside Revolver, coinciding with the runway shows. “German consumers who used to be very conservative are loosening up their buying, not only buying black suits but also different kinds of styles now,” he also noted.

Hillmose revealed the results of a survey led by the trade association at the closing of the fairs: “Numbers are all positive. The books are full of orders, no blank page left,” he said. “We expect 2016 to be an even better year than 2015.”

A total of 26 women’s and men’s labels showed in the Danish capital, including Mark Kenly Domino Tan, Freya Dalsjø, Nicholas Nybro and established labels such as Henrik Vibskov, Baum und Pferdgarten and By Malene Birger.

Models of the moment including Frederikke Sofie, Nadja Bender and Caroline Brasch Nielsen walked the Copenhagen runway this season. Victoria’s Secret angel Josephine Skriver heated up the By Malene Birger runway, while Bender was spotted front row at the show, which was held at the Glyptoteket Museum. Other venues included the Hotel d’Angleterre, the Thorvaldsen Museum and the chilly Grey Hall, the concert hall in the Danish capital’s hippie borough of Christiania, where Bob Dylan performed back in the day.

Some local labels were absent this season, either skipping the catwalk altogether or showing elsewhere, resulting in a light show schedule on the third day.

Soulland showed for the third season during London Collections: Men in January (but still threw a bash in Copenhagen to celebrate its 10th anniversary); Anne Sofie Madsen and Yde are to show during Paris Fashion Week on March 2 and March 9, respectively, and Vibskov showed in both Paris and Copenhagen. The designer, who has a store in New York, said showing there could be an option down the road. “The American market is strong for us so it could make sense to show in New York,” he said.

Eva Kruse, chief executive officer of Copenhagen Fashion Week, which draws around 30,000 industry professionals, said, “We want our talents to go out and be as successful as they can wherever they show. Our job is to create a strong platform out of Copenhagen so that it can be a natural choice for them to be here but we are supporting them in any way we can.

“We want to pursue men’s wear as the main focus for the summer season. We are aiming at giving men an exclusive venue outside of City Hall,” Kruse said. “Within a year, we are going to get more shows and presentations from the great Danish and Scandinavian men’s wear designers. There’s a certain approach to men’s wear that is cool, practical and functional out of Scandinavia. I think it has an attitude that the world would like. It has been in people’s minds for years that Danish girls are beautiful and models are great but it’s time to give the Nordic men some play now.”

“There’s a huge opportunity with Danish brands,” said Terry Betts, a former buying director of men’s wear at Selfridges who’s now head of business development at London-based personal styling shopping Web site Thread.com that stocks such brands as Oliver Spencer, Richard James and Hardy Amies. “There’s an appetite in men’s wear for what sits just underneath that designer market. You see more contemporary brands, you see the success of Acne Studios, Rag & Bone and A.P.C. The next good company could come from Denmark. It feels there’s a natural design process here. There’s a potential that’s about to be unlocked. “

Among highlights from the CIFF fair, he cited Several, TWC, and Norwegian Rain. “Their outerwear is superb, the interpretation of a military parka is my favorite coat of the season,” he said of the latter brand. He praised the show’s area called Raven Projects that featured labels such as Story Mfg and Ecoalf. “I am interested to see how those sustainable designers evolve.”

Dylan Ross, head of the Nordic buying office at Zalando, said he was impressed by such labels as We are Copenhagen!, Legends and Several. Zalando already stocks such labels as Wood Wood and Soulland. “Danish brands have always been clever at doing fashion at a good price. That’s especially true for men’s wear brands. Men are price-conscious and loyal,” Ross said.

In terms of men’s wear trends, he noted check flannel shirts, wool overcoats, boxy work jackets “with a fleece like the old-style Levi’s denim jacket” and a color palette of camel, burgundy, khaki, plus camouflage.

In a timely move, Zalando staged a direct-to-consumer show that was open to the public on the last day of Copenhagen Fashion Week. Some 800 enthusiasts filled up City Hall, the main show venue, to shop the spring 2016 collections directly from the runway, via iPad.

“You see a young generation of young kids who are heavily interested [in fashion]. Men’s wear is more dynamic,” said Rasmus Storm of the Copenhagen concept store Storm that carries such brands as Raf Simons, Astrid Andersen and BLS. (Men’s wear represents about 50 percent of the offer at Storm.) Storm said he was planning to see the Tonsure fall collection. “Everyone who goes to Copenhagen is inspired by the streets. It’s a mix between Copenhagen as a fashion week destination, fair destination, combined with the street style and the culture,” said Storm.

The city’s retail scene is vibrant. This spring, Soulland, Wood Wood and Mads Nørgaard are to open stores in Frederiksberg, a fashionable area of the Danish capital.

On the sidelines of Copenhagen Fashion Week, the Danish Fashion Institute cohosted The Jewellery Room, an initiative now in its sixth edition aimed at positioning Danish jewelry on the international fashion map. Held at Nikolaj Kunsthal, it showcased 24 of the region’s labels, including heavyweights such as Pandora, Georg Jensen and Ole Lynggaard and smaller ones like Orit Elhanati and Maria Black.

After two stores in Copenhagen, one in Stockholm and one in Sydney, Ole Lynggaard is plotting a Paris unit for April. “It will be a 1,076-square-foot boutique around the corner from Colette [Paris’ concept store on Rue Saint Honoré],” revealed Charlotte Lynggaard, the creative force behind Ole Lynggaard, the jewelry label founded by her father.

The next Copenhagen Fashion Week will take place Aug. 10 to 12. Before that, the Danish Fashion Institute is to host its Copenhagen Fashion Summit, held every other year, on May 12 with a “responsible innovation” theme. Panelists set to participate include Shubhankar Ray, G-Star Raw’s global brand director; Michael Beutler, Kering’s director of sustainability operations, and Michael Kobori, Levi Strauss & Co. vice president of sustainability.

Ahead of the summit, the Danish Fashion Institute and Turkish mill Isko cohosted two talks at CIFF. It was a full house for the discussion on sustainability that featured Jon Loman, H&M product designer for men’s wear and denim, and François Girbaud among the speakers. “The Danes are really taking the lead [on sustainability in fashion],” said Girbaud.