Will the Coronavirus Mean the End of The Red Carpet As We Know It?

Cannes is canceled, the Met Gala TBD and the Emmys in question. Will the coronavirus be the end of the red carpet as we know it — and some of fashion’s most jaw- dropping moments? Beyond celebrity culture itself, any transformation of the awards fashion parade in the age of social distancing also will have a snowball effect on designers, stylists and event producers.

The coronavirus has put the kibosh on the Cannes Film Festival. A final decision on the Venice Film Festival has been put off until the end of May. The Met Gala is still TBD. And the Emmy Awards, slated for Sept. 20, are in jeopardy, at least in their current form, now that California Gov, Gavin Newsom has said large-scale gatherings are “not in the cards” even after the lockdown is lifted.

Is this the end of the red carpet as we know it, and along with it some of fashion’s most jaw-dropping moments?

“Everything has been pushed to the fall, and we’re optimistic things will move forward, but who knows?” said red carpet award show specialist Andy Gelb, a partner at Slate PR. “Once we do come out of this, people will want to get together in responsible ways, maybe not 1,000 people, but smaller, shorter, different formats. But the days of squishing a packed red carpet are over.”

Hollywood has taken a severe hit, with movie theaters closed worldwide, productions halted, premieres and film festivals postponed or canceled. The fallout has also impacted the entertainment-fashion economy, and the red carpet as a platform — for designers catering to celebrities with fantasy looks (and sometimes lucrative dressing contracts) that can trickle down to household name recognition and aspirational sales; for image makers who help craft every outfit change, and for behind-the-scenes p.r.’s, VIP marketing teams and event planners, down to lighting, tent and tech workers.

“These are first-world issues, but it’s how our world works,” said stylist Jason Bolden, who has worked with Yara Shahidi, Ava DuVernay and Mindy Kaling, and stars in the Netflix series “Styling Hollywood.” “My business is based off events and to put it plainly, if no one has anything to go to, there’s no budgets to pay people, it’s a huge trickle-down effect.”

With the fashion industry itself in survival mode, furloughing workers, rethinking runway shows, and trimming marketing budgets, some worry Hollywood glam will never return to what it was when Louis Vuitton, Valentino, Chanel, Gucci, Cartier, Harry Winston, Chopard and many more were channeling millions into who wore it best.

“I question what the role of the celebrity stylist is going to be,” said Cristina Ehrlich, who has dressed Mandy Moore, Brie Larson, Laura Dern and more. “Are publicists, when it all comes back, going to need us, or just work directly with brands?…Are brands still going to spend 60, 80, 120,000 euros to make a dress” for the red carpet?

But maybe reining in red carpet excess (and couture dresses flying first-class back and forth from Paris to L.A. for fittings, ahem) isn’t such a bad thing — for the planet, and for designers struggling to stay solvent in an an unprecedented time.

“Yeah, of course, part of me would miss it. We’ve had such amazing moments that have changed peoples’ lives, with Billy Porter and Leslie Jones, and helped shift the culture,” said Christian Siriano. “In some ways, red carpets aren’t just pretty dresses, they can be impactful and meaningful.”

Even if the return isn’t always quantifiable.

“Obviously, we sell some clothes based on some red carpet things, but it’s also an expensive part of the business that doesn’t always translate into dollars,” said Siriano, who once dressed nine people for the Emmys. “Shipping boxes back and forth, that can cost me $50,000 in just one awards season.”

Billy Porter in Christian Siriano at the 91st Academy Awards in 2019.  Richard Shotwell/Invision/AP/Shutterstock

Some believe the fashion brands have invested too much in awards shows, which have seen dwindling viewership for years. The 2020 Oscars was watched by the smallest audience in its history, just 20 million people, a 6 million drop-off from the previous year. (By comparison, the Super Bowl garnered 99 million viewers.)

“I’ve always thought it’s been more about a brand being consistent throughout the year,” said Brooke Pace, founder of Alta Moda Communications, who has worked with Moschino, Alberta Ferretti and David Yurman, among others. “When you think about garnering press, and I will use the Golden Globes as an example, because it’s probably the hardest, you do all this work and get a placement, then you are competing against the other 50 women on that carpet. You are better off having that same person for a premiere. You have probably more return as far as press and visibility.”

But for now, premieres are also grounded. Some events have headed online, where there could still be some celebrity dressing and styling opportunities, perhaps for the upcoming GLAAD “Together In Pride” event on April 26, for example, which will be livestreamed with special performances and messages from Kesha, Bebe Rexha, Dan Levy, Gigi Gorgeous and more. (Though no stylists contacted have received any dressing inquiries.)

Mostly, event production companies are brainstorming what the new red carpet, at least in the immediate future, might look like when Hollywood gets back to work and stay-at-home restrictions are lifted, by paring back attendees and taking into account social distancing guidelines. 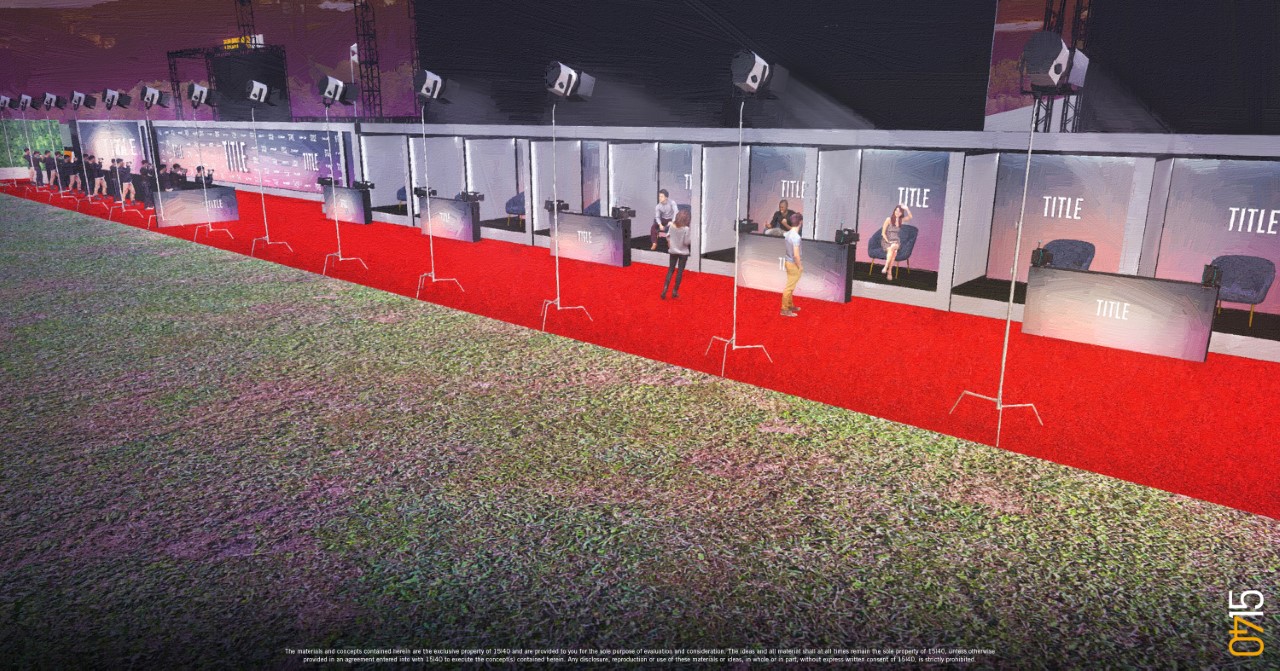 One scenario could involve talent sitting in chairs in interview pods that have built-in cameras and lighting, and having interviewers moving down the line to ask questions at a socially acceptable distance. “What we’re trying to get away from is virtual, because the last thing anyone is going to want to do after this is have a videoconference,” said Craig Waldman, president and chief design officer of 15/40 Productions, which did 200 Hollywood arrival events last year. “This format would work for a premiere, the Emmys, the Tonys,” he said, adding that the number of press would probably have to be cut by one-third, and that fans could be incorporated via Zoom screens opposite the talent, and ask their own questions of talent about what they are wearing, for example. “It could be an amazing interaction.”

“It’s going to be about timed arrivals, a non-flexible headcount, a press pen that is really well-organized, you enter like you board a plane, and the process has to be contact-less,” said events expert Sophie Pape, founder of S Projects, who produced the Met Gala last year. “It’s also going to be about real estate, keeping things outdoors, and we have also talked about significant HVAC units to blast pathogens…” 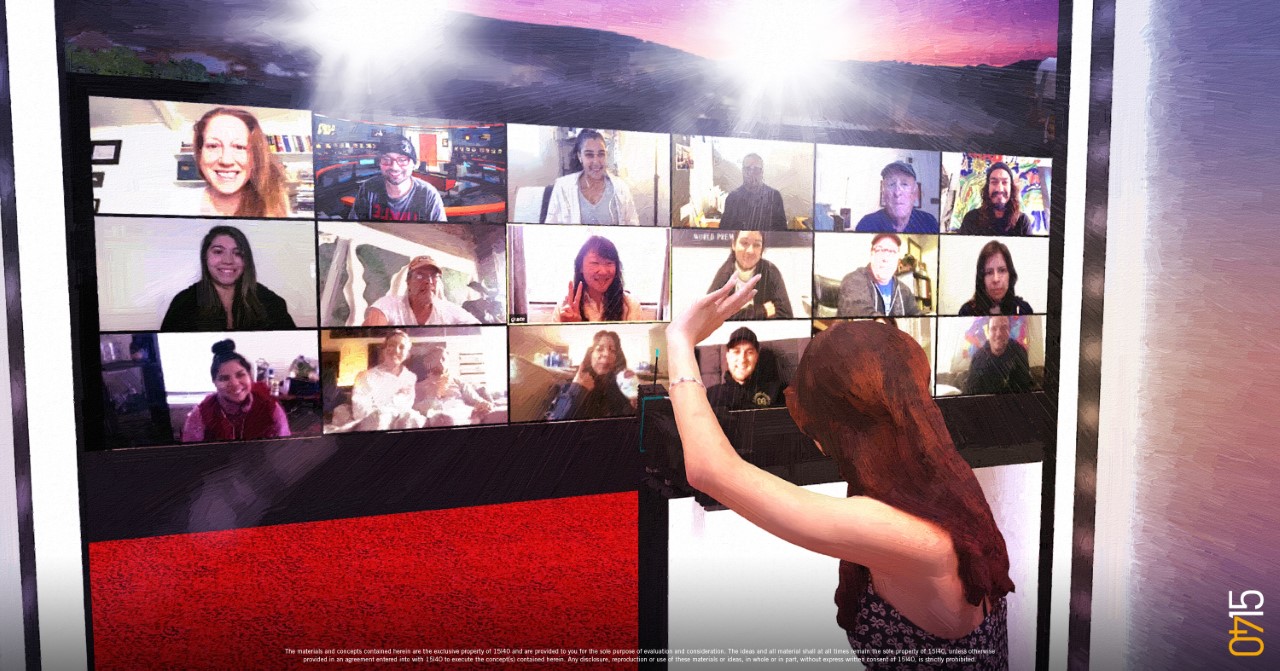 Creative rendering of what the red carpet could look like in the era of social distancing.  Courtesy of 15/40 Productions

How such a clinical approach affects the party mood — and frocks — remains to be seen. Not to mention, it’s doubtful designers who are currently skipping seasons and shows altogether will be creating any new gowns.

“For a celebrity, the key of having an important stylist is to have access to clothes that just walked the runway or that no one has seen yet,” said Bolden. “Now, are we going to be in a space where we’ll all be using past collections? Maybe this will be a beautiful thing — let it be the best dress from 1998 or 2018 or couture 2021. Maybe it’s the idea that it’s just an amazing dress, who cares what season.”

Style over the latest fashion would certainly be different, and perhaps more environmentally sound. Of course, the whole top-down celebrity culture itself could be disrupted as consumers have less disposable income and more pressing priorities coming out of COVID-19, which has itself highlighted social inequalities and a number of tone-deaf stars, from David Geffen to Arielle Charnas.

“People are going to be looking up to the women and men who are doing great things,” said Siriano. “Just wearing a fabulous dress won’t mean the same thing. When family members are sick and dying, people don’t care if you look fabulous at your house.”

Or maybe even on a red carpet.

Still, most believe it’s unlikely that COVID-19 will spell the end of Hollywood glamour, even if people have gotten used to quarantining in loungewear. 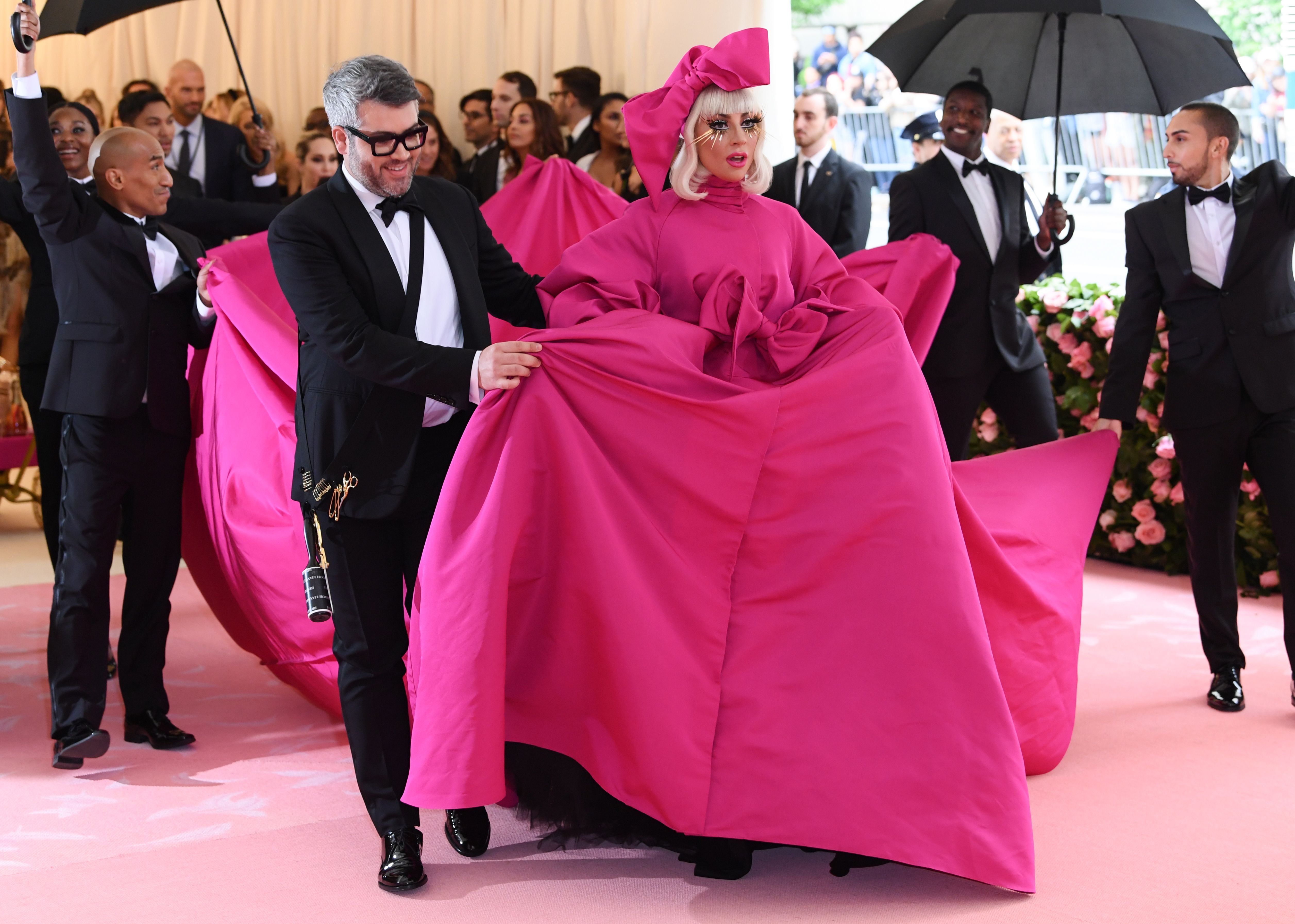 “I remember as a kid how fantastical those red carpet moments were, they were a peek into a dream world, and what life could be,” said stylist-turned-designer Brandon Maxwell, who helped Lady Gaga make one of the most epic red carpet entrances of all time at the 2019 camp-themed Met Gala. “That dream and optimism will matter now more than ever and people will want to get dressed up again,” continued Maxwell, who has been going live on Instagram every day of the last month to talk to aspiring fashion designers stuck working on their final projects from home.

“I feel hope there will be a need for a little fantasy,” added Siriano, who still hasn’t decided what form his next fashion show will take. “So far, what we’ve gotten from our social people is that events this fall will be even more.”

Come September, if Emmy nominees are seated in red carpet pods, there may be different kinds of fashion opportunities — to show off fantasy shoes, for example. And if fans are not lining up in real life, but rather asking actresses questions via Zoom, one of the streaming channels currently raking in viewers at home could try selling those shoes straight off the red carpet. That would be one way to get rid of excess inventory.

At the very least, there will likely be a place on the new socially distanced red carpet for a couture mask.

“There will be a need for something more stylish and interesting,” said Siriano, who with his staff has been making masks and other PPE to help with hospital shortages since the pandemic began. “Yesterday, I made this fully encrusted pearl mask because I just needed a break. It’s actually pretty fabulous.”