They don't wear capes. A new line by the Mattel subsidiary honors the front-line fighters of the coronavirus pandemic.

Everyone old enough to remember 9/11 has very specific recollections of that morning. Fisher-Price executive Chuck Scothon was awaiting news of a a press conference for what now seems an eerily prescient product launch — an FDNY action figure. It was an addition to the company’s “Rescue Heroes,” series, sales of which would benefit an FDNY-related charity. The press conference never happened. The action figure did, with Fisher-Price and Toys ‘R’ Us, its partner in the project, upping the philanthropic aspect to 100 percent of sales.

Last week, Fisher-Price and parent company Mattel debuted another Heroes series, an uplifting, feel-good/do-good effort, the timing of which is not accidental. #ThankYouHeroes is the first initiative under Mattel’s new cross-brand Play It Forward platform, focusing on ways to give back to communities in need. The Fisher-Price launch features action-figure heroes of the coronavirus era — doctor, nurse, EMT, delivery worker. Each comes in female and male versions, as well as different skin tones (if not specific ethnicities), a total of 16 total doll options. In addition, there’s a “Little People Community Champions” set, part of an ongoing Fisher-Price line. It’s a lineup of five essential-worker heroes, those noted above, plus a grocery worker. “It’s about saying thank you, and honoring the people who are doing so much for others,” said Scothon, now senior vice president of Fisher-Price and global head of infant and preschool, Mattel.

The action figures, sold separately, and the Little People set are $20 each with $15 per item going to #FirstRespondersFirst, in support of front-line health-care workers. 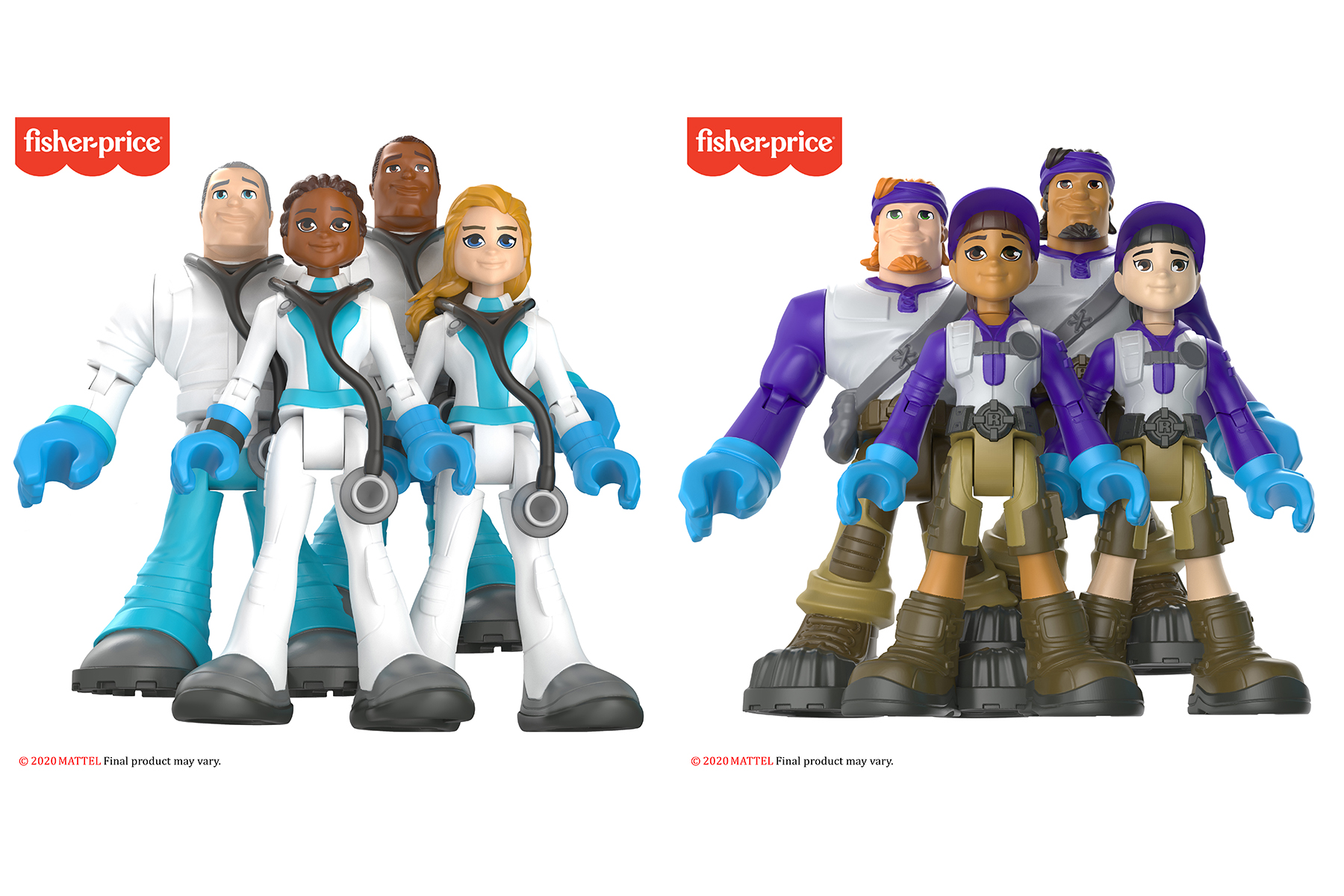 From left: The Nurses, The Delivery Drivers   Courtesy of Fisher-Price

All sales are direct-to-consumer. The company is taking online orders through May 31 with delivery promised by Dec. 31. (The date’s a legal thing, with Christmas the obvious goal, and home deliveries starting in September.) The action figures exude wholesome power, and the Little People, a cuteness befitting the younger-skewing age target. Both could have a profound, lasting impact on the way kids view various employment roles.

Yet kids aren’t the project’s only intended market. While the typical action-figure demographic is between three and eight years old, early indications suggest far wider appeal. “I would call it three to 99,” Scothon said. “It’s striking a chord with everybody. We’re finding that adults are falling in love with these as well.”

The multitiered consumer interest as indicated by comments on the brand’s web site and social media outlets reflects the brand’s pre-launch expectations. Of course, people are ordering for their kids. But they’re also buying to say thank you to the front-line workers in their lives, and for the fundraising aspect. “It really is a little bit of everything, and I think that’s why it’s captured the imaginations of so many.”

See Also: How to Help Those In Need During the Coronavirus Crisis

The project came together quickly — about five weeks from first glimmer to available for pre-order. At least the digital incarnation happened fast; the visuals here and on the point-of-sale web site are digital, with actual prototypes still in development. While a typical doll launch takes up to 18 months from development to consumer reveal, here, speed was of the essence. “We knew that we could move fastest and raise the most money if we did this direct-to-consumer,” Scothon said.

“Our focus was on being able to say thank you now,” he continued. “It’s a slightly different business model. Typically, you design the product, you manufacture the product and then you ultimately get it to retail and [learn] the consumer response. This business model is selling it now, taking orders first and then delivering going forward…We were able to flip the model. That’s why we’ve been able to go so fast.”

Scothon and his colleagues were inspired by the global gratitude they’ve observed from the onset of the pandemic. Watching the evening news, he noted that almost invariably, the first 25 minutes are about the hard, difficult news while the last five focus on gratitude. He cited examples from American police and firefighters lining up outside hospitals to thank first responders, to people on their balconies in Italy and New York, cheering health-care workers.

“Thank You Heroes came from [us] watching that outpouring of gratitude and thinking of how can we help people express their gratitude,” Scothon said. Mattel was already producing PPE for health-care professionals, making cloth masks and face shields, and has committed to 500,000 of the latter.  “But our secret sauce is toys,” he said. “Toys are a great way to say thank you in a unique and fun way.” 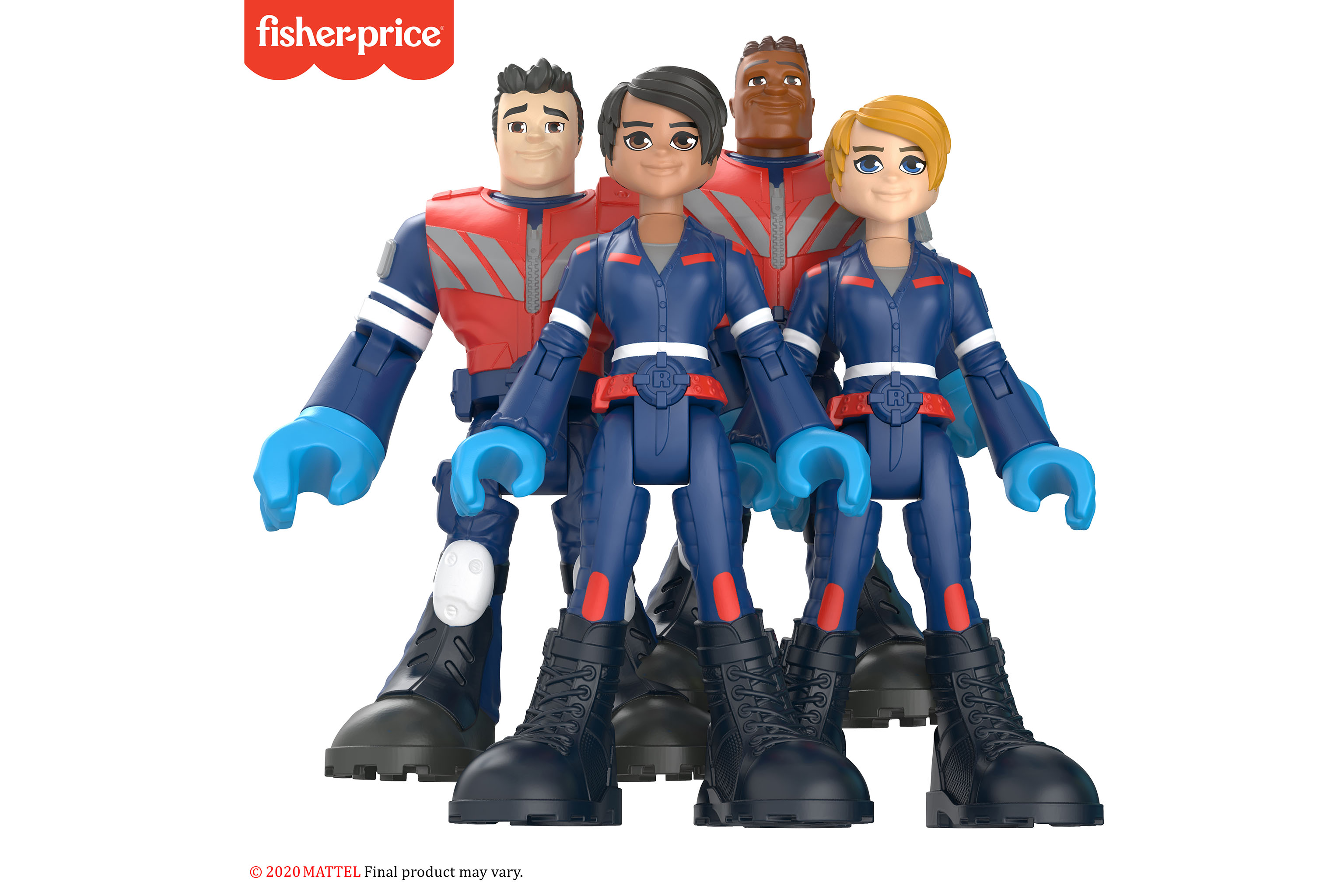 The EMTs  Courtesy of Fisher-Price

What better conduit than dolls to represent essential workers, both within and outside of the realm? “We realized that what we do best, which is making product, could honor those on the front lines, including new heroes, like grocery workers and delivery workers; raise money for those first responders, and at the same time potentially bring a smile during a very challenging time.”

In selecting the characters to portray, Scothon said that health-care workers were obvious; “they’re truly on the front lines and being discussed every day.” So, too, “the new hero” delivery and grocery workers. “They’re keeping our economy going, and we wanted to embody and celebrate them.’”

The grocery worker appears only in the Little People set, not as an action figure. In the interest of speed, designers adapted some “existing assets” which were broadly, but not totally, adaptable. “We didn’t feel that we could properly dimensionalize the grocery store worker in the action-figure pose and structure in a way that [worked], We decided to [depict] the four that we felt we could [successfully] honor through action figures, and [include the grocery worker] in the Little People, where we could still honor them, but with a different style and look.”

Online comments indicate that many people love the idea and execution:

“My children have almost every single Imaginex toy that has been made in the last eight years. These are such a great addition to that collection!”

“Thanks so much for recognizing nurses during this time (all while contributing to a great cause)…I am also happy my girls will have some brave, courageous nurses to play with. Love, An RN”

“My daughter is an RN who works on a COVID-19 unit here in Massachusetts. This is a wonderful way to commemorate her work and willingness to risk herself to help those who are sick with this illness. Her courage and caring make her a real Hometown Hero.”

“I can’t wait to give this to my husband! Thank you for appreciating the workers who handle the shipping and delivery of much-needed necessities.”

However, as the old adage goes, you can’t please everyone. Some commenters suggested a level of customization that in fashion we’d call couture, calling for multiple options for each of the jobs represented. There are numerous comments about the dearth of blondes (“Love to get one for my daughter who is a blonde RN with long hair”) and other calls for very specific inclusivity. One woman noted while she loves the idea, she’s a 68-year-old nurse. “How about recognizing the older RNs,” she queries. 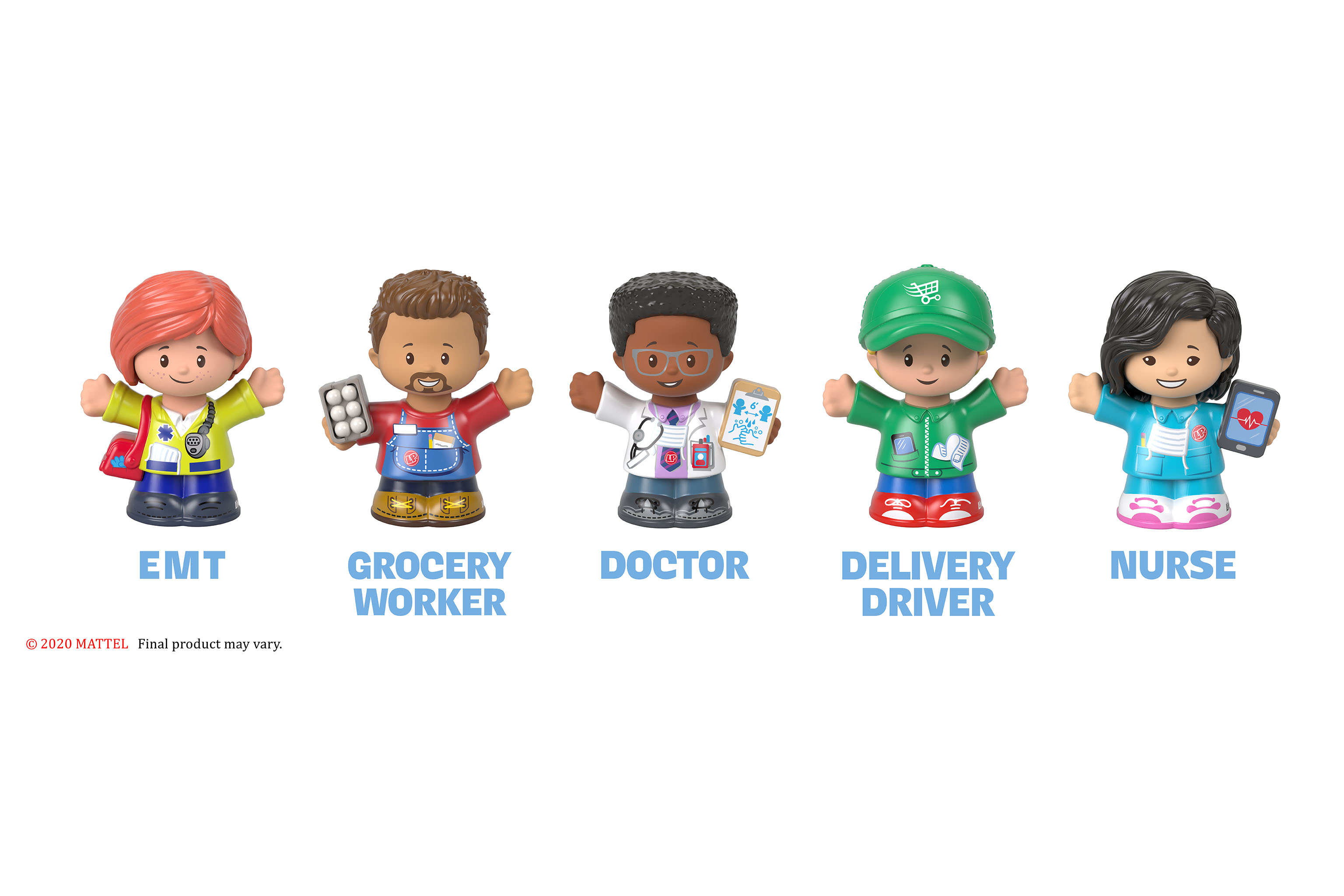 There are calls, too, for broader job representation, from respiratory therapist to postal worker to longshoreman. As for the figures’ professional trappings, a number of postings question why the nurse figures have an otoscope, and one commenter finds the delivery-worker uniform too FedEx-y.

Jeeze. Whiney much — given the impossibility of acknowledging with a doll every job function and hair color (and length) participating in fighting the pandemic? Not according to Scothon. He finds such feedback informative and inspirational. “It shows that the program is connecting with people in a very powerful and emotional way,” he said. “It’s important for us to understand the broader [perspective] of how people are seeing heroes. It gives us much to think about, for the future, as to how we redefine heroes. People have responded to the program, and they’re looking for themselves.

“It goes back to that one word — honor, honoring front-line heroes,” he continued. “We want to recognize that there are so many people out there doing their best to make a difference in this world. We we want to honor them.”

While many of the comments highlight the appeal of the action figures as gifts for adults working in the pandemic’s front lines, they are toys for children. As such, they can leave lasting impressions on their youngest recipients — a point obviously not lost on the Fisher-Price executive. “We believe that toys can have a purpose and an impact far greater than just the moment,” Scothon said. “It’s the way kids learn, it’s the way they develop. Toys are one way to show kids who the heroes are, that they don’t just wear capes.”

Envisioning the Retail of the Post-Coronavirus Era

How Can Brands Sensitively Market Products During COVID-19?

A Guide to When States Will Reopen Amid the Coronavirus Pandemic

WATCH: How Fashion Is Fighting the Coronavirus