The lingerie retailer is also preparing to roll out a more sophisticated store model at other locations across the U.S. 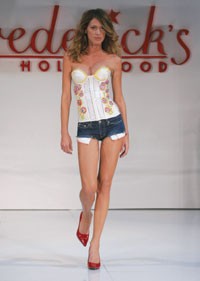 LOS ANGELES — Frederick’s of Hollywood marked the opening of its flagship in Hollywood with record-breaking corset sales at the third annual Lingerie Art Auction on Thursday night and a fashion show the previous night.

The lingerie retailer is also preparing to roll out a more sophisticated store model at other locations across the U.S.

“This has been a long time coming,” said Frederick’s chief executive officer, Linda LoRe. “It’s been a dream of mine to see this happen. The store is sexy in such a classy way.”

The iconic lingerie retailer, which generates annual sales of $200 million through its 150 stores, catalogues and e-commerce business, is calling the newly designed flagship the “Modern Hollywood” look. LoRe said the next store to feature the same flavor would be the Westfield Century City location in West Los Angeles, set to open in December. Fifteen stores have opened this year. Five stores in a scaled-down version will be opened in 2006.

The company has been slowly remodeling its other stores, relocating existing units and adding new ones that promote a more intimate boutique lingerie shopping experience.

In a nod to old Hollywood glamour, the new 4,500-square-foot, bi-level store on Hollywood Boulevard, one block east of Grauman’s Chinese Theater and the Kodak Theater, home of the Academy Awards, features a dramatic crystal chandelier above the cash wrap and a staircase to the mezzanine level. Swarovski crystal sconces are in the store and in dressing rooms — which have a dimmer switch for customers to see themselves in all light — and artsy, oversize photos of models adorn the walls. Of course, there is also the company’s trademark leopard-print carpet.

The modernization can even be seen in the spacious waiting area, which features contemporary white leather seating and white lacquer nesting tables. The lounge on the second floor serves as a VIP area, and customers can also reserve it free of charge for showers, parties and other events.

Julianne Moore, dressed in a deep olive Burberry dress and cardigan and Roger Vivier sandals, inaugurated the more glamorous look. Moore was host to 300 guests who bid on 30 corsets designed by celebrities including Moore, Nicole Kidman, Melanie Griffith, Charlize Theron, Sandra Bernhard and Tea Leoni. Six corsets were auctioned live Thursday, and the rest were auctioned silently and on eBay.

Theron’s design of chocolate-colored satin with tulle and beading fetched $18,000. The previous record was $9,000 for a Sharon Stone-designed corset in 2003. Kidman’s design of white satin with painted flowers and crystals running down the bodice brought $10,000.

The event, which benefited the Tuberous Sclerosis Alliance, raised $95,000 and also brought out Val Kilmer, Cuba Gooding Jr. and Matthew Perry. Moore, who is a spokeswoman for the TS Alliance, has participated in the event since its inception and hosted it for the first time this year.

“I tried to think of something that was relevant when designing my corset,” said Moore, whose charcoal-colored velvet number featured crystal peace signs hanging from the hem. “And with the war [in Iraq], I thought it was appropriate.”

Asked if she was a Frederick’s shopper, Moore blushed and said, “I’m more of an Eres shopper, frankly.”

The actress, who had not had a chance to tour the spacious new location, might be surprised at the more upscale offerings now available from the 60-year-old, Hollywood-based company that introduced sexy black lingerie to consumers after World War II.

Looks that cater to a more fashion-forward crowd include color palettes such as chocolate and pink, tweed-and-satin corsets retailing for $75, embroidered bra and panty sets for $132, fake-fur capelets for $48 and fur-trimmed bras for $32. Merchandise is grouped in style shops, with sections for corsets, boyshorts, camisoles, push-up bras, cotton basics and the company’s recently launched “Seduction” and “White Hot” collections.

Customers will still be able to find Frederick’s favorites, such as garter belts and maribou-embellished mules, both prominent on the runway Wednesday at the Avalon Club in Hollywood for throngs of men holding up cell phone cameras in hopes of stealing a sexy shot.

Previously, both the auction and fashion show were on the same night. But people familiar with the event said that it was split into two this year because the auction crowd and club-going crowd at the runway shows didn’t mingle well.

LoRe said she was pleased with the turnout at both events and looking forward to the holiday season, despite the business challenges facing the industry. “The merchandise looks fantastic and we have bullish plans, but we are dependent on mall traffic. We pray there are no more hurricanes.”