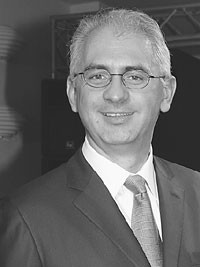 BOLOGNA, Italy — The Italian beauty industry, which in years past has been a powerful export engine, is sputtering.

The recession that has gripped the major economies of Western Europe is painfully felt in Italy; the combination of the weak dollar and the strong euro has made exporting problematic. Meanwhile, demand has evaporated at home. Discounting prices by as much as 30 percent has become a commonplace reality of doing business for local beauty retailers.

These were among the themes that surfaced at the four-day Cosmoprof beauty trade show, which ended Monday. According to Unipro, the Italian association of cosmetics industries, exports fell by 2.2 percent in value to $2.18 billion, or 1.8 billion euros, last year, while the overall Italian cosmetics industry grew by 2.2 percent to a total volume of $8.65 billion, or 7.15 billion euros. Dollar figures have been converted from the euro at current exchange rates.

The Cosmoprof fair did a bit better. Show organizers said the attendee turnout for this year’s session was up 10 percent to 137,500 visitors. The number of international visitors jumped 30 percent to 30,326. Laura Zaccagnini, general director of Sogecos, the organizer of Cosmoprof, said that, in recent times, the industry has been preoccupied with issues such as the war in Iraq and SARS, so this year’s trade show offered an opportunity to take stock. “We need to reconnect and see where we are,” she said.

Probably the segment showing the brightest promise and the most striking growth in 2003 is the herbalist shop channel, which jumped 7.7 percent even though the market segment is tiny at $289.2 million, or 239 million euros.

Indeed, many companies have jumped on the natural product bandwagon. “I can’t remember any launch like this before,” said Paolo Bevegni, director of Micys Company SpA’s international division, referring to the launch of Miss Milkie, Pupa’s 10-stockkeeping-unit bath and body line based on dairy products.

A division of the Paglieri Group, Selectiva tripled its income in three years to $13.3 million, or 11 million euros, in 2003.

Atkinsons, which was one of the pioneers in the popular skin care market with the distinctively packaged I Coloniali brand, is launching Spirit of the Amazon, a line of bath and body products touting indigenous ingredients. It also is introducing Seeds For Hair, a nine-sku line created with seeds of different plants that are purported to solve specific problems. Atkinsons also is reinvigorating its Bizarre color cosmetics line, dating from the Seventies. Aimed at a young urban market, the line, which is only sold in Italy at 700 points of sale, has rung up prelaunch sales of $3.6 million, or 3 million euros, which the firm ultimately aims to double. Bizarre is midpriced, with a lipstick retailing for $13.30, or 11 euros, and a nail polish for $8.50, or 7 euros.

Such an accessibly priced line fills a need in Italy, according to Nicholas Wilkinson, managing director of Cosmopolitan Cosmetics SpA, which acquired the Atkinsons line from Unilever. Cosmopolitan, the beauty arm of Wella AG, is in turn owned by Procter & Gamble.

“Consumer confidence in Italy is the lowest in Europe,” he said. “With inflation and perceived inflation, people are convinced they can’t afford to buy.”

Wilkinson said the greatest problem is in the upscale selective fragrance market. He quoted Abacus tracking firm as saying that the high-end fragrance market inside Italy has shrunk by 20 percent in units sold over the last 24 months.

Korres, another accessibly priced plant-based personal care line, was showcasing a new line of products based on the ingredient mastiha, found on the island of Chios in the company’s native Greece.

Everyday ingredients such as strawberry jam and whisky were the inspiration behind Saledo’s line of bath and body items. The three-year-old Milan-based firm, which rang up sales of $7.9 million, or 6.5 million euros, last year, aims to more than double its turnover by yearend with the launch of a range of gourmet-inspired fragrances and personal care products.

Natural products have a new home in Rinascente department store’s flagship in Milan. One of the fresher additions to the cosmetics department is an expansive corner for niche and natural brands underscored by a large Lush counter. It was developed under the direction of beauty buyer Simone Destefanis.

Also expanding its scope as a natural retailer is Brazilian brand Natura, with its range of products featuring ingredients culled from the Brazilian rain forest. The brand is set to open a store in Paris’ Saint-Germain des Prés neighborhood by yearend that will carry the Natura Ekos line. Since Natura is a direct retailer in Brazil, the boutique is a new concept that will allow the company to build consumer awareness for its brand. Executives also said it will need to test the new venture before deciding on further rollouts.

One company that has bucked the negative trend with a spectacular growth trajectory is Collistar. The Italian brand racked up sales of $83.2 million, or 68.8 million euros, last year, up from $27.5 million, or 22.7 million euros, in 1996. Moreover, 17 percent of last year’s 21.2 percent growth rate occurred inside of beleaguered Italy.

Antonella Calcaterra, the brand’s export manager, attributed much of the brand’s success to its affordable price positioning.

“We didn’t change our distribution — we gained more and more market share among the selective brands because we are less expensive,” she said.

The blur between mass and class segments is personified by Milan’s most prestigious perfumer, Augusto Mazzolari, who was singled out for special recognition by the Accademia del Profumo at Cosmoprof Friday night. In an effort to make high-end perfumeries accessible to budget-conscious shoppers, Mazzolari has opened 11 Olimpia Beauté Mazzolari perfumeries adjacent to Esselunga hypermarkets, a number that he expects to grow to 40 in 2007.