Italian fashion houses say they’re psyched for spring, with many brands touting double-digit growth in pre-collection orders — but there are still signs that it’s not quite time to break out the spumante.

Sales growth in the... 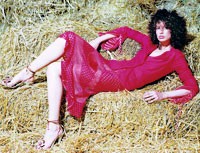 Italian fashion houses say they’re psyched for spring, with many brands touting double-digit growth in pre-collection orders — but there are still signs that it’s not quite time to break out the spumante.

Sales growth in the U.S and Asia is encouraging, but there are still plenty of challenges, namely how to protect margins when the top line isn’t skyrocketing, dealing with euros that are worth more than dollars — albeit at a more stable rate than in the past — and a stagnant European market that’s suffering from weak tourist flow. The mood is generally optimistic, but some observers still stress that caution is just as in style now as it has been since 9/11.

Gucci, Versace, Valentino, Missoni, Gianfranco Ferré and Dolce & Gabbana all reported a double-digit jump in spring pre-collection orders. Prada said orders “have been strong” in accessories as well as ready-to-wear. Giorgio Armani estimated that spring apparel orders are up on average between 8 and 10 percent, while accessories orders have climbed 40 percent. Several companies said they are doing a swift business in individual pieces and separates, a reflection of how customers are selectively spending to achieve their own look, on a budget.

“It’s not unusual to see someone wearing Diesel jeans or a Zara skirt and more expensive top, for example,” said Michele Norsa, chief executive officer at Valentino and general manager of Marzotto apparel.

Domenico Dolce and Stefano Gabbana said various items, ranging from T-shirts and leather jackets to suits, have been a hit with buyers this season.

“Every season, trends and products change, but what’s important is that the pieces are precious — and not necessarily expensive — and make you feel like you are living a dream and have the sensation you are wearing an ‘exclusive piece,’” the designers stated.

But even though there are signs that sales are on the rise, most companies are working to protect their margins, whether that means boosting efficiencies internally, cutting expenses on fashion shows, being more selective in terms of collection size or opting to outsource some production to developing countries.

“We all know that every company has to manage the best it can. There’s definitely no room for waste anymore,” said Vittorio Missoni, Missoni’s marketing director and sales manager.

Dolce & Gabbana saw one of the strongest growth rates in spring orders, posting a 22 percent jump. Meanwhile, general affairs director Cristiana Ruella said sales in the company’s directly owned stores from the beginning of the year through August are up 40 percent — 25 percent on a same-store basis.

“As of today, we have an objective to grow [sales] by at least 20 percent, which we think is even more impressive compared with average growth rates for the industry that are closer to 6 percent,” Ruella said.

She added that the company hasn’t altered its price points to stimulate demand, and is still on track to boost production at its plants and open another store this year.

Giorgio Armani is similarly upbeat on 2004, compared to a lackluster 2003 dominated by the effects of SARS, the war in Iraq and a slump in tourism.

“The Armani Group is now seeing a strongly positive trend in both wholesale and retail channels on all three major continents, which would indicate that consumer confidence, which was lacking for most of 2003, has returned,” an Armani spokesman said.

As for sales so far this year, the spokesman noted that China and the U.S. have shown the most dynamic growth in the first six months of the year, although Japan and Europe are also “contributing to a positive trend in the year-to-date.” He said that although sales in the U.S. slowed in June, they picked up in August and early September and the company is trying to minimize the price increases it has been forced to make to account for the euro’s value.

Armani said it has been prudent on investments, using internally generated funds to pay for new stores, refurbishments and expanding areas like home furnishings and accessories. Still, the company is not cutting back on ads.

Armani said it plans to increase 2004 advertising and promotional expenditure by more than 10 percent on the year.

“The Flora lines, redesigned by our creative directors with an amazing modern reinterpretation of the world-famous ‘Flora’ motif, specifically created in 1966 for Grace Kelly, are a very pleasant surprise, based on the response we have seen so far, which exceeds our expectations,” Santucci said.

Santucci, like many other executives, said he’s not fazed by the strong euro-to-dollar exchange rate. Many in the industry have said they are relieved that the rate has stabilized over the past six months to around $1.20 to 1 euro.

“The strong euro and economic growth in certain regions of the world continue to put pressure on all companies in our industry,” Santucci said.

“Nonetheless, it is important not to overreact to market difficulties. We continue to invest in the Gucci brand by maintaining adequate advertising budgets and expanding the retail network.”

A Versace spokesman said spring orders are up more than 30 percent, but he clarified that a large portion of the jump is attributable to a shift in strategy that makes this season not directly comparable with last spring.

As reported, Versace has merged its pre-collection and main collections to speed up delivery times and do more business before the runway show. This move, along with other cost-cutting measures and a push to do more franchise retailing, is part of a restructuring plan that aims to get the house back in the black this year.

“Cocktail dresses did very well. There was continued growth in daywear, and accessories continue to do well with the biker bag outselling other bags,” a Versace spokesman said. He added that a push into more multibrand stores in Italy helped lift sales in that market while wholesale price cuts of between 5 and 15 percent in different product categories have helped boost demand in the U.S. Versace said it cut prices to be more competitive and narrow the gap between European and American prices.

Norsa reported all of Valentino’s lines are showing high double-digit growth this season. The women’s and men’s spring collections of the recently launched younger line, Valentino R.E.D., were presented in Milan at the men’s show in June. Valentino Roma will stage a presentation in Milan during this round of women’s shows.

He said Europe continues to be a difficult place to do business, but Asia and the U.S. are improving. He added that the Valentino lines, as well as the M Missoni bridge brand Marzotto produces under license, are all seeing growth of more than 50 percent in the U.S., where Marzotto has had to raise prices by an average of about 5 percent to compensate for the euro.

At the same time, Marzotto is cutting costs by outsourcing certain lower-end products to developing countries such as China — a trend other companies, like IT Holding, are embracing.

At Gianfranco Ferré, commercial director Alessandro Varisco said orders are above budget and up about 20 percent, with the strongest growth coming from Eastern Europe, the Far East and the Middle East and promising signs from the U.S. as well. He said the brand also projects 20 percent sales growth for the year.

“The winners are urban-style suits, with skirts and pants, but separate tops are also selling well. From jackets to shirts and sweaters, those can be mixed and matched to create an easier look,” he said.

Vittorio Missoni said his family firm’s total orders are up 12 percent, with those from the U.S. rising 20 percent. He also forecast full-year revenue growth of 10 to 15 percent.

Missoni said the company is working to protect margins through various cost-cutting measures, like reducing travel and fashion-show expenses. He estimated that the company has cut runway expenses by 10 to 15 percent from last year. For the past few seasons, Missoni has teamed up with Etro to share the costs of building a stage that both houses use for their fashion shows.

Missoni is one of the few houses to admit it’s shaving costs off the shows but the Camera’s Boselli said he’s witnessed a growing trend for houses to opt for less expensive static presentations than runways shows. Some have said the presentations are actually better for buyers’ schedules, but the bottom line is that they are cheaper to produce.

“In this image-driven industry, no one wants to admit that they are cutting these types of costs, they just do it and that’s it,” Boselli said.