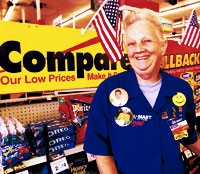 NEW YORK — It’s been a cruel season for sales associates.

In addition to low salaries, department stores and mass merchants have been slashing benefits and employee-based programs in the face of rising health insurance costs and an intensely competitive retail environment.

According to a study by Columbia University’s Institute on Education and the Economy, the plight of this group is dismal: Almost one-third of working Americans now living in poverty hold retail jobs.

In February 2004, the U.S. Department of Health and Human Services defined poverty level as $18,850 for a family of four.

Low pay and long hours have made it difficult for employees to remain loyal to any retailer. Wal-Mart said its turnover rate is less than 50 percent, however experts such as Fred Martels, a consumer and employee loyalty expert and president of People Solution Strategies in St. Louis, put it closer to 55 percent.

Annette Bernhardt, Ph.D., a sociologist and labor economist focused on low wage work at the Brennan Center for Justice at New York University School of Law, said, “We did a study at the Center for Justice that calculated if Wal-Mart raised the wages of all U.S. workers by $2 an hour the impact on its prices would be about 1 cent for every dollar,” she said.

Wal-Mart pays a price for turnover, said Martels, who estimated the cost per employee, which includes interviewing, training, orientation, advertising and marketing at $1,950. He estimated the total direct cost of turnover to the company at $1.4 billion a year. Martels said employee loyalty and customer loyalty go hand in hand.

Loyalty has suffered throughout the industry. At Sears, for example, the average worker in 1990 had a tenure of 20 years. That number fell to 10 years by 2002.

Dan Butler, a spokesman for the National Retail Federation, said that by 2010, when there will be 500,000 more jobs than people to fill them, retailers will have to pay more attention to retention. “There will be more competition among retailers for sales associates,” he said.

For the time being however, stores are relying on lots part-time labor. Butler said part-time salespeople have different needs and motivations for working. “Salary is one indicator and not the only reason people work for the wages they work for,” he said, referring to job satisfaction. “A part-timer might have another job somewhere else.”

For many though, issues of salary, health and retirement, are common concerns. The jobless economic recovery has taken a dent out of sales and many companies are in cost-cutting mode. Disappearing stock programs, phased-out pension plans, lower subsidies for medical coverage and reduced incentive bonuses are a few of the areas being trimmed.

Like other industries that heeded Wall Street’s call for lean operations, U.S. companies have been increasing productivity levels by 5 percent a year. In the future, workers won’t simply be pressed to do more in less time, they may be replaced by technology that can do their jobs for less money.

Bernhardt, who focused on low wage work at the Brennan Center for Justice at New York University School of Law, said the predicament of sales associates is partly due to the Wal-Mart model that dominates the modern retail sector.

Wal-Mart has put intense competitive pressure on most distribution channels with its formula of low-priced products and large-volume sales. The company keeps margins razor thin by keeping operations costs — including wages and employee benefits — down.

Supermarkets cited pressure from Wal-Mart as one of the main reasons for trying to cut labor costs when workers at three large chains in Southern California went on strike to protest cuts in wages and benefits. The strike was settled on Feb. 29.

In recent years much of the retail industry has shifted from a service culture to one emphasizing sourcing, distribution and marketing, and getting products on the shelves and consumers out the doors as quickly as possible. Customers have been complicit in the transformation due to their relentless quest for low prices.

The NRF’s Butler believes that morphing of business channels has heightened competition and pressured stores to lower their cost of doing business. “Grocery stores sell food and auto products and items for the home,” he said. “Before you had clear lines of delineation.”

Recently, Sears, Roebuck & Co. eliminated stock-option grants to most of its 17,000 salaried employees and ended guaranteed pension benefits and company-subsidized retiree medical insurance to all new hires and employees younger than 40 as of Jan. 1, 2005.

“Almost all the changes we’re making will position us with the competition,” a Sears spokesman said. “We have a lot of medical benefits that are more generous than our competition.”

The sale of Sears’ profitable credit unit in November was the driving force behind the cuts, he said. “As we look at our work force, we’re trying to work out a benefits program that’s commensurate with our employees’ needs and with what our customers are willing to pay.”

The spokesman said 20 percent of Sears’ annual hourly associates will receive raises because their pay was found to be below the industry standard. He declined to give the amount of the pay increase.

Citing a 23.7 percent drop in December catalogue sales, J.C. Penney said it would cut 2,000 jobs from its catalogue business. The company has been slashing costs for two years, including closing stores. There have also been other more recent money-saving initiatives.

“We have scaled back our retiree health care plan,” said a J.C. Penney spokesman. “We’ve also had to make some changes in our benefits offerings to offset the dramatic cost increases we’ve been seeing. We increased the threshold for eligibility in terms of hours worked per week from 30 to 35 hours for full-time workers.

The Bureau of Labor Statistics reported that the price of employee health programs rose 6.3 percent in 2003, compared with the cost of wages, which increased only 2.9 percent.

The discontent is palpable. Members of Local 3 of the United Store Workers of America, the union representing sales associates at Bloomingdale’s 59th Street flagship, said they are being asked for concessions on their next contract, which expired on March 1 with a 60-day extension.

“We’re mindful of having to take care of our employees while taking care of the bottom line,” said Bill Baer, senior vice president of human resources and labor relations at Bloomingdale’s. “We’re negotiating in good faith. We have a lot of work to do.”

There’s talk about a strike among the rank and file. “They want us to work longer shifts and pay more for health coverage,” said one member.

Wal-Mart’s medical insurance is costly relative to employee wages. Single workers pay $15.25 per bi-weekly pay period, while families are charged at least $66.25 per pay period, a spokeswoman said. Premiums are $350 to $1,000.

Things like eye care and well baby visits are not covered under the plan. “Medical coverage is designed to be an affordable plan with catastrophic coverage rather than a richer plan that’s affordable only to a few of our associates,” the spokeswoman said.

The waiting period for eligibility is three to six months for full-timers and two years for part-timers.

According to Wal-Mart, more than 90 percent of the company’s workers have medical coverage, but a spokeswoman said Wal-Mart includes in its calculations workers covered under its plans, those covered under a spouse’s plan, students on a parent’s plan and those in government programs.

In Georgia, for example, 10,000 children with a parent in Wal-Mart’s employ in 2002 took part in PeachCare, a state program that provides benefits to children whose parents can’t afford or have no access to medical insurance. The next company on the list was Publix, which employed the parents of 734 uninsured youngsters. Wal-Mart is the largest employer in the state.

“At Wal-Mart, full-time means a work schedule of 28 hours a week at just over minimum wage,” claimed Bernhardt. “There aren’t many opportunities for advancement. The standard Wal-Mart store has one manager, four assistant managers and 235 nonsalaried workers.

Experts said Wal-Mart isn’t the best training ground for managers. “Like McDonald’s, Wal-Mart is a manufacturer of low-skilled workers,” said Therese Byrne, publisher of the Retail Maxim Report. “If managers left those companies today they’d have difficulty getting high-paying jobs because everything they do is so standardized. They don’t have to make many decisions.”

Asked whether Wal-Mart has formal career paths, the spokeswoman said, “Yes and no.” Using her experience as an example, she said she rose from cashier to jobs to training, operations, and finally corporate communications.

Career advancement is a central issue in job satisfaction. According to Bernhardt, the retail industry is one of the flattest in terms of job hierarchy. In other words, there are many entry-level low-wage positions but few opportunities for upward mobility.

It wasn’t always this way. Until the mid- to late-Eighties, selling floors were a training ground for management. Young men with an interest in a retail career took sales jobs in the Lord & Taylor men’s department. The A&S buyer training program was considered the Harvard of the retail industry.

Susan Burns, director of employment initiatives at Federated Department Stores, claimed there’s more job mobility in retail than other industries and Baer calculated that about 12 percent of new executive hires at Bloomingdale’s are the result of internal promotions, which can include the sales staff and other areas of the store.

But that seems to be an anomaly.

“Retailers, especially larger chains, are hiring experienced industry specialists for middle management and operations,” said Hastings. “The concept of starting at the bottom and working your way up through the ranks doesn’t exist anymore.”