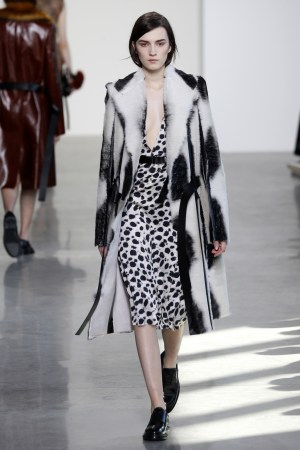 “I’ve seen it all.” So said Francisco Costa just prior to the fall 2013 show that marked his 10th year as women’s creative director for Calvin Klein Collection.

He’d seen it all but the high-profile, unceremonious exit. That came on Tuesday with the announcement by Calvin Klein Inc. that he and Italo Zucchelli, women’s and men’s creative directors at Calvin Klein Collection, respectively, are out. The move, the brand said, anchors a plan to “unify all Calvin Klein brands under one creative vision.”

The official appointment of a new creative director “in due course” is widely expected to confirm rampant speculation that Raf Simons is headed to the brand. The role of Kevin Carrigan, currently creative director of Calvin Klein’s sportswear lines, was not addressed, although the word “unify” suggests that if he stays, he will report to Simons or, should that appointment fall through, to Simons’ surprise replacement.

Costa leaves Calvin Klein Collection an undersung, underappreciated designer. His assumption of the top post there was perhaps the most charged and challenging of any designer in the history of American fashion — and among the most challenging globally over the past 20 or so years. He took over from Calvin Klein the man, the living legend, the consummate minimalist, the brilliant provocateur-cum-marketer of fashion as sex and sex as fashion. Klein walked away not a doddering has-been who outstayed his creative abilities but a pop-culture icon who, along with his partner Barry Schwartz, had cashed out, selling to PVH for $700 million (a figure Klein is said to have felt a giveaway on their part, and a steal for PVH).

The legacy could have overwhelmed, particularly as Costa assumed the position at a time of upheaval. “Calvin hired me,” he said during that anniversary interview. “A year later, he sold the company. The fact was that PVH took over and they had to cut costs somehow. The whole staff that was in-house was fired. The whole studio, the whole production team, everybody. And we became a licensee…I had no time to think about what exactly it meant. I had a job that I was paid to do. I had to design a collection and I had to move on with it. It was very simplistic. I feel that in a way, it actually worked for me — not having the understanding of all that was happening. I was just thinking, this is what I have to do. There was nobody else.”

Externally, fashion was changing wildly as well. The celebrity takeover of editorial was well under way and, with it, escalated red carpet expectations. The flood of young designers into the business and onto the show schedule had started. And a kid at Harvard was readying a wacky concept called Facebook for launch the next year.

There’s no question, Klein was and remains a fashion god, a status Costa never attained. So it might be heretical to say, but it’s true: Costa transported Calvin Klein Collection — and to a larger degree, the full brand, even though he was never responsible for anything beyond women’s collection — into fashion’s 21st century. He fed the red carpet beast with major youth-quake coups — Jennifer Lawrence, Rooney Mara, Saoirse Ronan — designing gowns with the requisite glam quotient without abandoning the house’s modernist aesthetic.

On the runway, he retained the Calvinisms — the slipdresses, the sensuality of the Seventies, the street vibe of the Nineties — without awkward homage. He also expanded and deepened that aesthetic, in a very real way heightening the fashion daring. In fact, Costa’s low-key demeanor belied the bravado of his fashion. His first collection, for spring 2004, was tentative and safe in the manner of many such debuts. By his second collection, he had assumed a sense of ownership, presenting his Calvin woman as the spiritual sister of Klein’s sensual Seventies girls, but in clothes that would ultimately prove more sensual and more daring than those Klein himself typically sent out, a fact to which Costa also alluded in 2013. While repeatedly noting Klein’s brilliance — “Calvin is a genius;” “always ahead of the curve,” “I’m just following the great concept that he left us here,” — he noted, too, that “Calvin set up this sexuality, but it only came across in the ads. Sometimes the clothes were just, you know, Calvinist.”

Fall 2016, Costa’s last show for the house, provided a powerful valedictory statement. “Was that a little ‘Justify My Love’ moment?” a retailer asked while congratulating him backstage for a show that delivered a high sexy quotient within an artful context. “It’s the night before and the morning after,” Costa replied. A steamy night indeed, yet one that retained a level of chic refinement.

Alas, Costa was not allowed his farewell ovation. He leaves the house immediately, and Calvin Klein Collection will take a two-season hiatus from the runway. (A savvy move by Manny Chirico and Steve Shiffman, ceo of Calvin Klein Inc., as “team” runway shows typically range from tolerable to uncomfortably bad.)

The rumors of Costa’s departure, in play for months, went hand in hand with those of Simons’ rotation in. It’s believed that his Dior contract ends in July, at which time he would be free to seek and obtain other employment. Musings on what his Calvin Klein might look like are best left to another day; this is Costa’s moment of consideration.

Yet one thing can be said of Simons’ hire or a dark horse surprise. The next creative director at Calvin Klein — as well as Dior’s next creative director, and that of almost any other house that may find itself in the market — will experience the vibe of oddly lowered expectations, if not internally, then externally. In the space of a very short time, the industry and, most likely, informed consumers as well, have completed a major mental shift spawned by the current game of musical designers. We’re now less likely to expect our fashion earth to move with the arrival of a new designer — barring, let’s say, the unlikely hiring of Rei Kawakubo or Miuccia Prada by a competitive house — and more likely to look at these new hires as we’ve been suddenly conditioned by recent corporate activity — as important but consummately replaceable skilled employees. Some of them will raise expectations by virtue of their work — hello, Alessandro Michele. Others will be one-and-done contract players. Here’s your hat, what’s your hurry. Next up.