The design duo are launching the contemporary C&T Costello Tagliapietra line for spring. 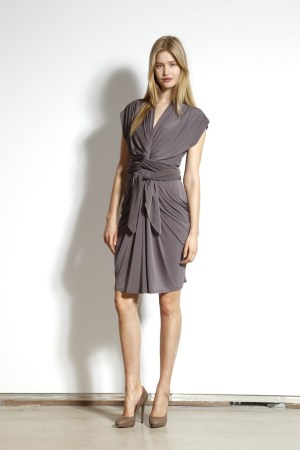 Some designers create secondary lines to stretch their creativity, others do it to bolster their bottom lines. It’s probably a bit of both for Jeffrey Costello and Robert Tagliapietra, who are launching the contemporary C&T Costello Tagliapietra line for spring, but, mostly, the duo says, it’s about something else.

“This is almost like a love letter to all the women we worked with who couldn’t afford what equates to rent on a dress,” Tagliapietra says. “They would buy clothes that were a lot more affordable or wait until things were on sale. We can finally give women something they can just buy and not have to stress about.”

The line of 13 dresses, each retailing for $298, is the fruit of a licensing partnership with The Jones Group, which started about a year ago, when Council of Fashion Designers of America chief executive officer Steven Kolb introduced the designers to Richard Dickson, Jones’ president and chief executive officer of branded businesses.

“It’s always been a dream of ours to do something that was more accessible in terms of price point and had a broader reach,” Tagliapietra says.

Tagliapietra and Costello, the rugged, bearish-looking pair who tied the knot in a small civil ceremony last month, are best known for their draping skills and eye for color — elements they wanted to incorporate into their new venture. Thus, the easy, fluid dresses are draped and gathered — nine in rayon jersey and four in silk — and done in mostly muted hues such as a soft graphite, teal and peacock blue. “So many dresses we make are almost like palettes for jewelry or accessories,” Tagliapietra says. “It’s how we look at the older way of dressing, how women would pull their favorite heirloom necklace they cherished.”

Yet they didn’t want the collection to feel vintage. “There’s a timelessness without locking into any age group,” Costello notes, adding that they’re already thinking of additional categories for C&T, including jewelry and men’s wear. “And we’d love to add accessories to the mix, like shoes and bags,” he says. “We’d also like to add more sportswear aspects.”

For Jones, C&T is an addition to a growing portfolio of designer-name diffusion brands that already includes Rachel Rachel Roy and B Brian Atwood. “I have been a big admirer of their product for some time, and the idea of bringing their technique in dressmaking to a wider range of customers was an exciting proposition,” Dickson says. “We are slowly building a new crop of what we call ‘next generation big businesses.’ C&T fits perfectly into that strategy of growth for us. They are passionate about what they do, and they are a cultural fit with what we are building.”

“Just having them as personalities around the complex here infuses fun,” adds Dickson, who declined to disclose sales projections. C&T will initially launch exclusively at Barneys New York Co-Op in March, with further distribution aimed at upscale department and specialty stores after that.

For Costello and Tagliapietra, saying they hope their new dresses will become a woman’s favorite is an understatement. “There is no better compliment than somebody who wears something over and over again until it’s almost in tatters,” Tagliapietra says. “We love that. The thought of someone just sticking it in her closet is never our goal.”