By Lindzi Scharf and Kari Hamanaka on February 18, 2015
View Slideshow 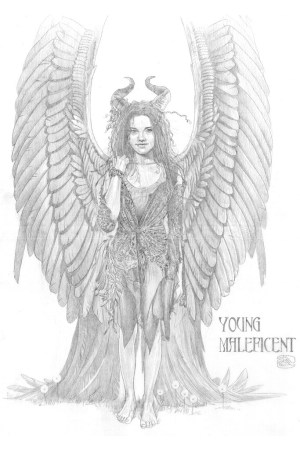 Nailing the look of a pixie or witch is no small feat.

This year’s nominees in costume design had their hands full when creating the looks that helped bring to life stories of a Disney villain in Maleficent or a British painter in Mr. Turner.

Every costume designer has his or her own process for capturing a character’s emotions, or the subtle messages of a scene.

For Jacqueline Durran, nominated for her work on the period piece Mr. Turner, there was no use of fashion references.

“I tried not to look at fashion,” she says. “I tried to look solely at paintings and at fashion jewelry from the period, and to separate my mind from my modern perspective.”

Others—such as Colleen Atwood, nominated for her work on Into the Woods—drew inspiration from a scene’s environment, among other places.

“I was inspired by the colors and texture of the forest while prepping Into the Woods. The older Grimm illustrations and woodcuts were my favorite bits of research,” Atwood says. “I did not really look at the play; I wanted to do something fresh, design-wise.”

It’s very much detective work, said Mark Bridges, nominated for his work on Inherent Vice.
“I love getting clues from a bunch of different sources and then distilling it down to a character,” he says.

It’s a different process from that of a fashion designer, who faces the pressures of the marketplace, Durran points out.

“My focus as a costume designer is on interpreting a script and making some kind of solution that culls the thing together,” she explains. “Whereas [if you’re] a fashion designer, you have to sell the thing you’re making.”

Still, that hurdle doesn’t necessarily place commercial projects off limits for Durran or Bridges, who would consider the right opportunity.

“Under the right circumstances, I would enjoy designing a commercial collection,” Bridges notes. “I often think of it as I am researching a period and find pieces that are unusual and unique. They are often fresh and interesting, and could be an inspiration for a garment for today’s lifestyle and particular glamour.”

Atwood has already dipped her toes in the water with a namesake handbag collection sold online.

“It is a new endeavor,” she says, “and I am loving the experience.”

Here are this year’s nominees:

Colleen Atwood
Into the Woods marks Atwood’s 11th nomination. She previously took home Oscars for Chicago (2002), Memoirs of a Geisha (2005) and Alice in Wonderland (2010).

Mark Bridges
Bridges, P.T. Anderson’s longtime collaborator and Inherent Vice costume designer, is up for his second nomination, having previously won in 2012 for The Artist.

Milena Canonero
Canonero’s work on The Grand Budapest Hotel is her ninth nomination. Her first nomination and win came in 1976 for her work on Barry Lyndon. That was followed by Chariots of Fire (1981) and Marie Antoinette (2006).

Jacqueline Durran
This marks Durran’s fourth nomination. She won the Oscar in 2013 for Anna Karenina. She was also nominated for her work in Pride & Prejudice and Atonement.

Anna B. Sheppard
Work on Maleficent marks Sheppard’s third nomination after her work on Schindler’s List and The Pianist was recognized.