Is there a whiff of Wisteria in the air? Certainly if it's up to Coty Inc.

By Julie Naughton and Pete Born on March 3, 2006
View Slideshow 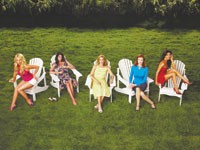 NEW YORK — Is there a whiff of Wisteria in the air? Certainly if it’s up to Coty Inc.

The beauty company has signed a license for a “Desperate Housewives” fragrance with Touchstone Television, which produces the hit TV show. The scent, which is expected to hit department stores this fall, will be based on the fictional denizens of TV’s Wisteria Lane and is part of Coty chief executive officer Bernd Beetz’s drive to build a dominant player in the global fragrance business.

The deal confirms a WWD report first published on July 27.

“A deal like this gives us a platform — not only for a celebrity license, but for a lifestyle brand,” said Beetz, calling the show “a phenomenon which has reached not only all over the U.S., but internationally as well. This type of deal is a new frontier.” And it’s one, he hinted, that could lead to additional partnerships with studios.

In the past, Beetz has conceded that the lifecycles of celebrity brands fluctuate; last June, he noted that the company’s blockbuster Glow by JLo scent — the first fragrance from Jennifer Lopez and one that is widely credited with kicking off the current craze for celebrity fragrances — was no longer doing the $100 million in global sales that it had done in its first year, but that it “has generated the launches of other products.”

Is he worried about hitching his fortunes to the vagaries of a TV show, even one as popular as “Desperate Housewives”? The short answer: No.

“It’s a phenomenon,” Beetz said of the show. “The ‘Desperate Housewives’ zeitgeist continues to gain momentum.”

The celebrity business is one of the three components of Beetz’s formula for making Coty the world’s preeminent fragrance firm. The two other major pillars are designer — such as the recently acquired Calvin Klein brand, which produced a Christmas bestseller in Euphoria — and lifestyle, with brands such as Davidoff.

Showing that Coty plans to build all of those pillars, a second deal was announced Thursday — an agreement between Coty and Japanese beauty giant Kose to distribute Coty’s Rimmel brand in Japan. Coty and Kose will also create cosmetics that have been adapted for that market, Beetz said Thursday.

“We’ve done our homework,” he said. “The organizational structure now in place allows us to build strongly on all three pillars, and we are doing that. Our strategy is to loyalize the consumer, and to do that we have to be strong across all three pillars. When they are loyal to our brands, they will be open to new things we are doing.”

Beetz wouldn’t divulge many specifics about the “Desperate Housewives” fragrance, simply saying the object was to create a scent “as complex, beautiful and sexy” as the women on the show. And given the diversity of the characters — working mom Lynette (Felicity Huffman), klutzy Susan (Teri Hatcher), ultraperfect Bree (Marcia Cross), former model Gabrielle (Eva Longoria) and vamp Edie (Nicollette Sheridan) — it’s hard to say exactly what the scent will smell like.

But it’s a safe bet that a healthy percentage of the 24 million viewers who tune in every week to watch their antics will give the scent a try.

“We’ve seen a tremendous response to ‘Desperate Housewives’ products made available to date, so extending the franchise into the world of fragrance makes perfect sense,” said Bruce Gersh, senior vice president, business development, ABC Entertainment, in a statement. “Given Coty’s outstanding track record in the fragrance market, the ‘Desperate Housewives’ scent is guaranteed to be a hit with women everywhere, connecting them in a very personal way to this popular series.”

The Coty fragrance adds another dimension to the beauty activities of the five stars individually. In February, Huffman signed on for a series of “Webisodes” — promotional ads — for Dove’s Calming Night collection of bath and body products. Hatcher signed a deal in September to be the face of Clairol’s Nice ‘n Easy hair color brand, with ads that began breaking in January magazines. Longoria has a deal with L’Oréal Paris, promoting the brand’s Vive hair products.

Beetz has often said his ultimate goal is to make Coty the leading fragrance company globally. Coty’s net fragrance sales globally are approaching $3 billion, according to the company. Of that, prestige fragrances, industry observers estimate, account for about $1.5 billion in global sales.

In addition to the successful celebrity licenses Beetz has added over the past couple of years, he’s been on a buying spree of late. Last May, Coty spent $800 million to acquire the designer fragrance licenses formerly held by Unilever Prestige International — Vera Wang, Calvin Klein, Cerruti, Chloé and Lagerfeld; it had purchased Nautica from UCI previously.

Since the beginning of 2006, Coty has also restructured parts of its beauty business. In response to the changing department store landscape, the company restructured its prestige fragrance business, combining the old Lancaster Group and the old Unilever Cosmetics International units into one organization, Coty Prestige Beauty.

Two distinct sales divisions have been formed as well. The prestige department stores division, which mirrors the organizational structure of Federated Department Stores, is being overseen by Dominic Pisani, senior vice president of sales. A second U.S. sales group, for specialty stores, is headed by Dennis Keogh, senior vice president of specialty stores. Keogh’s division is charged with the responsibility of growing sales in Neiman Marcus, Nordstrom, Saks Fifth Avenue and specialty boutiques, among others. Both Pisani and Keogh now report to Bob Cankes, president of Coty Prestige North America.

Coty executives broadly describe the deal with Touchstone as a partnership in the sense of a grand alliance. That same dynamic is at work in the second announcement made Thursday, which represents a geographic alliance. Under the terms of this deal, Japanese beauty giant Kose will distribute Coty’s Rimmel brand in Japan. This follows last week’s announcement that Coty Prestige is taking over the U.S. distribution for Puig’s beauty brands, which include Prada and Carolina Herrera. Rimmel had previously been distributed in Asia by EIDA.

Globally, Rimmel does more than $400 million in sales, according to industry sources, who also pointed out that Kose ranks number three in Japan. Sources estimate that Rimmel’s business in Japan — based on a year which includes the phasing out of EIDA and the phasing in of Kose — could reach 2 billion yen, or $17.2 million at current exchange, this year.

“We are not as strong in Asia as we should be,” Beetz said Thursday. “With this partnership, we have a strategy in place that will make the Japanese market a blockbuster. The values of both Coty and Kose are aligned. We like each other, and we will do great things together.”

Added Yasukiyo Kobayashi, president of Kose Corp., “Rimmel is a makeup brand that has been growing dramatically in Europe and the U.S. The success in this collaboration is expected to advance the business expansion and corporate values of both parties in the future.”

In the eyes of Coty executives, the Kose deal provides not only a geographic advantage, but creative research and development input. The centerpiece of the partnership with Kose involves plans to create a new version of Rimmel for Japan, which will specifically address Asian consumers.

“The Japanese market has specific needs, and we will adapt and create products in the Rimmel line that will address these needs,” said Beetz.

The new line, now in development, could involve as many as 100 stockkeeping units, aimed at hip teens and twentysomethings. It is expected to be launched in drugstores, supermarkets and variety stores, and be merchandised on wall units, in September.