Reminded of his over-the-top generosity, Beetz replied, "It will taste much better at that price." 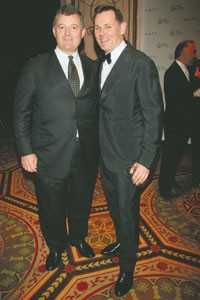 NEW YORK — “I am truly humbled to be the recipient of this award,” said Bernd Beetz, chief executive officer of Coty Inc., at the 31st annual Beauty Ball, held at the Waldorf-Astoria Hotel on Wednesday night. Surveying the crowd of more than 550, he said wryly: “And this is the best-looking — and best-smelling — crowd I’ve ever seen.”

The event, which raised more than $1.1 million, benefits the March of Dimes, an organization of special significance to Beetz: “I lost two children to prematurity,” he said, silencing the chattering crowd. He wasn’t the only one: Fox 5’s Andrea Day, the event’s featured speaker, movingly spoke of her late son, Michael Tyler, who was born six years ago at 24 weeks’ gestation and died days after his birth. “I think about him everyday and wonder what I did wrong,” she said, eyes welling up. “The March of Dimes does such valuable work.” Day has since had two healthy children, now two and four years old.

Beetz didn’t let up on his commitment to the cause after designer Vera Wang, ceo of the Vera Wang Group, presented him with his crystal apple. During the live auction, Beetz started the bidding off with a bang, paying $1,300 for a $30 dollar bottle of Grey Goose vodka. Arthur Becker, Vera Wang’s husband, quipped, “Just to make you feel better, I’ll send you another bottle.”

But Beetz was unfazed. The magnanimous gesture seemed in sync with his obvious determination to do everything he could for the charity. “I’m very happy to support this organization’s mission of eliminating infant morality,” he said. “It’s a great, great cause. Nothing is more important than saving lives.”

Reminded of his over-the-top generosity, Beetz replied, “It will taste much better at that price.”

Spirited bidding for six additional packages followed, with two packages, donated by Continental Airlines, garnering the top bids. Each offered two BusinessFirst tickets to anywhere in the world Continental flies — “and if Continental doesn’t fly there, you don’t want to go there,” quipped the evening’s auctioneer, Nicholas Lowry, president of Swann Auction Galleries. The Continental packages garnered $28,000 each.