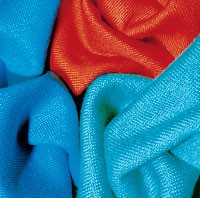 The strategy appeared to be paying off, with many exhibitors reporting an uptick in sales through the first half of the year.

“Everybody is trying to invent new yarns so customers don’t compare the price of the yarn from three years ago,” said Giacomo Festa Bianchet, president of Lora Festa. “It’s going to be difficult in this market to sell basic merinos. We have changed the mix of our product so we are selling more expensive yarns — less merino, and more cashmere and silk.”

The U.S. dollar was worth 80.6 euro cents on Monday, down 9 percent from its 88.5 euro cents level of a year ago and off the most recent high of 84.2 euro cents in mid-May. The weakening of the dollar makes the prices at the show, which are quoted in euros, seem comparatively higher to U.S. buyers. But, in a sign that the strong euro wasn’t taking too much of a toll on export business, exhibitors said buyers from outside of Europe were still out in force and looking for new products.

“We’ve seen a lot of foreigners here and it looks like everybody is in a different mood and pushing hard to find something new to stimulate the market,” said Festa Bianchet, adding that his company had seen sales rise through the first few months of the year, though they have leveled off since May. “We are doing well in the Far East and America, but Italy is still very calm.”

Show organizers said attendance among foreign buyers was up 3.5 percent at the event, which ended its three-day run at Florence’s Fortezza da Basso on Friday. The number of buyers from the U.S. increased 11 percent, 65 percent from Taiwan, 19 percent from Hong Kong and 6 percent from Japan. Attendance of Italian buyers, the largest contingent, was down 8.1 percent, leaving overall traffic off 2.9 percent to 7,257.

At Loro Piana, director Luciano Bandi said the company had posted a 30 percent increase in sales for the first six months of the year, compared with 2003. Bandi said the cashmere yarn business had been particularly good.

“We have had another fantastic year and it wasn’t expected,” he said, attributing the results to strong sales to the U.S. market.

Some exhibitors seemed surprised at how well business with U.S. customers held up in light of the exchange rate.

“The exchange rate is worse than it was in January — I can’t believe it,” said Stefano Borsini, president of Igea. “But the strange thing is we have our American customers coming here saying business is fantastic, that knitwear is selling really well and they have plans to create more for next season.”

Most agreed that developing new products was key to keeping business steady.

Luigi Botto showed new aspects of its four-ply merino yarns called XT-Four, which had been woven into finer counts and cashmere mixes. The company also exhibited a version of its XT-Four yarn with 2 percent of Dow’s XLA stretch fiber.

“The whole philosophy behind the XT Process is that we believe the classic merino 230 has got no future, it’s being sold as a commodity — a product for the masses,” said Ulrike Beier, Gruppo Luigi Botto’s export manager for Germany and England. “With this new project, we hope to push wool back to where it used to be, something the customer can understand, a higher-value product.”

The company believes customers will pay an extra 1.5 to 2 euros a kilogram (84 cents to $1.13 a pound) for its XT-Four yarn compared with traditional cashmere because of the yarn’s low pilling, better drape and faster production time qualities.

“We can see the demand from the customers to differentiate themselves from the masses,” said Beier. “The XT-Four yarn is a very conscious strategy to change the demand of the final customer.”

Leone said the company had invested $93 million in the XT-Four production process, including custom-made machinery to produce the yarn. Gruppo Luigi Botto experienced a sales increase of more than 10 percent in the first six months of 2004 compared with prior-year levels.

The company calls its new product Saxon merino. It’s the result of five years of research and comes from a specialized New Zealand sheep breed of the same name. At a fine 18 microns, Saxon has natural elastic, resilience, comfort and crease-resistant properties that enable the fiber to be used for producing a seamless garment, said Baruffa. The company had also mixed the Saxon fiber with 30 percent cashmere to appeal to the luxury market.

Firms such as Todd & Duncan and Cariaggi were upbeat because of their focus on the luxury market.

“We have discovered that in this moment cashmere is at the front of the market and we’ve had a 40 percent increase in turnover for the first six months of 2004 compared to 2003,” said Cristina Cariaggi, communication manager of Cariaggi.

The company’s revenue in 2003 was $36 million. Cariaggi showed a new fiber as part of its cashmere yarn collection. “Duetrentasei,” which literally translates as “two-thirty six” and refers to the yarn count, is a 100 percent cashmere yarn spun finer and softer than a normal cashmere yarn.

She planned to install the duetrentasei as part of its replenishment assortment in Italy. The company also mixed the yarn with a four percent Elité nylon to offer it in a stretch version.

“I’m pleased to see that cashmere has been updated with stretch,” said Billy Tuttle, designer for Old Navy. “I also love the felted feel of the fibers.”

Todd & Duncan, the Scottish cashmere yarn producer, is also riding on the crest of cashmere demand. The 107-year-old company experienced a 30 percent increase in the volume of goods sold, which because of price declines equated to a 15 percent rise in revenue for the first six months of 2004.

“In the specialist segment of cashmere, it’s a good moment. There is strong demand,” said sales and marketing director Stefano Finotti. “The luxury yarn market is staying firm on its sales level. It’s only the other medium- to low-yarn markets that are losing ground.”

Exhibitors offered yarns in a wide array of colors and textures. Carded yarns interested buyers with soft, liquid and felt touches in just about every color.

At Zegna Baruffa, tweed colors were reinterpreted to make yarn more modern looking. A line of cashmeres in pinks, creams and beiges were created to have a hand-feel effect of powder.

Carded yarns in acid colors with a felted touch also featured at Lora Festa. The company introduced carded yarns for fall 2005 in response to customer demand and had also added a custom-made yarn service.

“We want to give more exclusivity to the yarn and to the customer to provide more service,” said Lora Festa’s Bianchet.