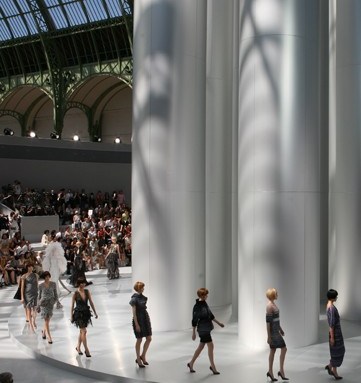 PARIS — Will couture’s hand-rendered and delicate seams be able to withstand the economic crisis?

So far, so good, say executives, who anticipate no drop in client attendance — though hardly an avalanche of orders — as the high fashion shows get under way here today.

“The growth will be lower in 2009, but we are expecting growth,” said Bruno Pavlovsky, Chanel’s president of fashion, which posted a double-digit sales rise in couture last year, selling more units of its summer and winter collections. “We are quite confident; we aren’t specifically anxious about the business.

“If (clients) are coming, they want to continue to be part of the dream,” he said in an interview, sounding upbeat and serene. “I believe a lot in couture because of the creativity and because of the very special service we can give to the customer.”

“We had double-digit growth and the second half of the year was good,” echoed Sidney Toledano, president and chief executive officer at Christian Dior. “I believe that in this world you still have people looking for the exceptional — extraordinary materials and exceptional designs, custom-made by an atelier in Paris.”

Toledano said Dior couturier John Galliano, who in the past had staged fantastical shows with extreme silhouettes, has since 2007 returned to “really interpreting the Dior codes and the Dior cuts, and this has been impacting the sales.”

To be sure, couture has been riding high in recent years as the luxury boom — and an influx of younger clients from a range of emerging countries — kept the remaining handful of practitioners running at full capacity. Executives allowed that the financial crisis could cast some chill on the uppermost slice of the fashion business, and voiced caution while underscoring the positive trends.

“In the past three years, we have seen many new customers from all parts of the world, not only the U.S. and Europe — from China, for example,” Pavlovsky said.

Fabrizio Malverdi, president and ceo of Givenchy, reported an 80 percent increase in its couture revenues last year as Riccardo Tisci’s design imprint helped the brand gain traction. An increase of 20 percent is forecast for 2009, he said, noting the majority of its customers are based in the Middle East. Malverdi also noted new couture clients could be existing ready-to-wear clients looking to trade up, or someone intrigued after seeing a celebrity wearing a couture garment on the red carpet.

A spokesperson for the Giorgio Armani Privé couture collection cited an increase in clients from the Middle East over the past two years, but noted it is “difficult to predict how the American sales will fare. Nevertheless, we have had a positive response in confirming our regular and new clients to the show….The couture business has performed well even in the past two seasons.”

“We have a nice carryover of orders into 2009,” noted Nicolas Topiol, chief executive officer at Christian Lacroix. “It’s performing quite well relative to ready-to-wear and retail, which both suffered at the end of 2008. We have a pretty stable clientele and we’ve gained some new clients. I’m not too worried.”

The global pool of couture clients remains small, numbering in the hundreds, meaning even one new client can turn the tide. “You do a big wedding, and your business is there,” said Lacroix’s Topiol. Topiol allowed that orders from American clients could drop, given the scale of the financial crisis there, but new clients from Japan and China might pick up the slack.

In recent years, couture houses have dramatically stepped up the level of service provided to clients, dispatching seamstresses and representatives around the world for fittings. Executives agreed the white-glove treatment will only improve.

“Last year, the couture team was the biggest travelers in the company,” Chanel’s Pavlovsky said. “One day they are in Greece, the next day Los Angeles, and then Russia and then the Middle East. It’s a one-to-one relationship.”

“In more of a crisis situation, you need to be very close to your clients,” agreed Lacroix’s Topiol.

At Givenchy, seamstresses are often dispatched to the client’s country on the day of the wedding “in case they need a small adjustment,” Malverdi said.

What’s more, the Givenchy couture department even helps brides recruit hair and makeup artists for the big day, and photo and video crews to document the entire process, from the show and fittings in Paris through to getting ready for the big day.

“Couture is becoming part of the wedding, and they want to live an experience,” Malverdi said. “It’s as important as having a great dinner, and a great location for the wedding. It’s a full service we give them.”

Veronique Gautier, president at Jean Paul Gaultier, said couture posted a single-digit increase last year and “the objective is to stay at the same level” in 2009. She asserted that Gaultier’s distinct and irreverent take on couture has engendered a loyal clientele that helps shelter it from economic volatility.

Roughly 70 percent of Gaultier’s clients are regulars from America, Europe, the Middle East, Russia and some from Asia, she said. “Couture is fantasy. You come to us if you see the world different,” Gautier said.

Executives agreed it would be a mistake to reduce pricing or to tone down couture for more sober times.

Topiol allowed that even wealthy clients may buy less clothing, but they are apt to favor “heirloom-type items,” for which couture fits the bill.

“Don’t forget that Mr. Dior and the New Look came after the war. It was an optimistic collection,” Toledano said. “The genius of Mr. Dior was to bring this elegant, confident, feminine silhouette.…The clients — and this is true for ready-to-wear as well — they want something really elegant and they want details. A lot of subtle things, but at high quality. We need the best workers, the best tailors and embroiderers. The industry should be challenged by that.”

“We need maximum creativity,” Chanel’s Pavlovsky agreed. “Karl Lagerfeld is an immense design talent…and we have to continue to invest in what makes us different: our know-how and creativity. This direction will continue.”

While many observers have suggested conspicuous consumption will nosedive during this economic crisis, and that luxury is becoming a dirty word, Toledano had a different take: suggesting that couture is a beacon of human capacity that should be enshrined, not maligned. He noted the exhibition “Dior and Chinese Artists” that recently wound up a two-month run at the Ullens Center for Contemporary Art in Beijing attracted more than 60,000 paying visitors — evidence that couture dresses, which were displayed among artworks, continue to fascinate the public.

“Even if you can’t buy haute couture, you see what men and women are capable of,” Toledano said. “Things like haute couture, they’re an example of human achievement.”

Gautier noted the house of Gaultier continues to receive requests to stage couture shows in other countries, and hinted that a high-fashion collection may soon travel to Russia and one other country. “It’s a little part of the business, but it’s very big in terms of image and giving the sense of the (brand) story,” she said. “Couture is still a pillar.”