Crabtree & Evelyn is kicking off a collaboration with interior designer India Hicks with a body care and home fragrance line, Island Living. 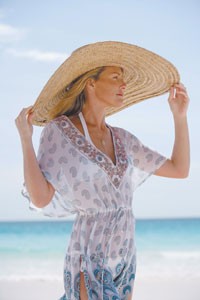 NEW YORK — Crabtree & Evelyn is kicking off its collaboration with interior designer India Hicks with the spring introduction of an island-inspired body care and home fragrance collection called Island Living.

The line marks Crabtree’s first foray into the prestige beauty market, considering it will make its debut at Bergdorf Goodman in the U.S. and Selfridges in the U.K. Traditionally, Crabtree has operated solely through its own stores and wholesale and e-commerce businesses.

Crabtree signed Hicks as its spokeswoman in early 2006 to help reenergize the brand. As part of that initiative, the company introduced its Naturals line for spring last year, a collection of products a younger consumer.

“For over 30 years, we’ve introduced botanically based formulations. We plan to maintain our heritage and the gift-giving component, but evolve the brand by offering a more benefit-driven product,” said Rob Ditchfield, president and chief executive officer of Crabtree & Evelyn. “As an author, model and designer, India has a strong English heritage and an eclectic and individual lifestyle that was a perfect fit for where we saw our brand moving. She personifies the values we see in our brand and what we’d like to bring to the marketplace.”

India Hicks Island Living offers 12 body care and home scents, an assortment that is divided into two fragrance groups, Spider Lily and Casuarina. It will be launched in March at Crabtree & Evelyn’s 140 boutiques in the U.S.; at Bergdorf Goodman, where it will be sold exclusively for three months; in Canada, and at Selfridges, with a later rollout to Crabtree boutiques internationally.

“Crabtree has a long-standing reputation for quality trusted in the marketplace,” said Ed Burstell, senior vice president and general merchandise manager of beauty, jewelry and accessories for Bergdorf Goodman. “Our customer knows who India is as a decorator and author, so there’s great synergy. Crabtree put just the right amount of design and restraint on it because they wanted to keep it simple and pure, but still reflect how it was indigenously designed.”

Starting in June, the Hicks line will be rolled out to Hong Kong and Australia. It will also be available on Crabtree’s Web site and will appear on a micro site called indiahicks-islandliving.com. Ranging in price from $18 for a hand wash to $80 for a three-wick scented candle, the products are inspired by Hicks’ lifestyle on a small island in the Bahamas and are meant to evoke a simple, elegant motif found in her island home.

“We are both sending the same message,” said Hicks. “I’m all about natural beauty and balancing life.”

The home fragrance collection features a blend of island wildflowers, orange blossoms, green palms and a sea air accord. Products in the body care assortment — including an eau de toilette, bath salts, shower gel, hand wash, body cream and polish — were granted the Royal Warrant by Hicks’ godfather, the Prince of Wales.

Hicks, who was closely involved in the creation of the fragrances, added her own touch to each item — including integrating the scent of her favorite island flowers and trees and offering antique maps on the packaging. A scented treasure box ($30) was inspired by Hicks’ children and their love of pirate adventures. The darkly stained mahogany wooden box is lined with an antique map and full of ocean-weathered pebbles, seashells, salt chunks, a skull and crossbones trinket and a key.

Industry sources said the new line could generate between $8 million and $10 million in first-year retail sales, increasing business by 5 percent on a global basis. Crabtree plans to support India Hicks Island Living with a viral video campaign as well as online ads, and the firm is looking to distribute about one million samples of the eau de toilette in two sizes and a body polish.

Although the partnership between Crabtree and Hicks is for three years, the company is in discussions to extend the contract, according to Ditchfield, because they are looking to work on another project.