The luxury-goods industry’s enormous counterfeit crackdown has forced the handbag knockoffs off the streets and into the underground. 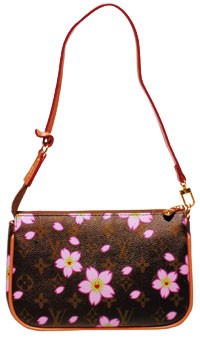 NEW YORK — It used to be that to find a knockoff Louis Vuitton handbag, all you had to do was jump in a cab to the corner of Broadway and Canal, hop out and quickly barter for the first fake Murakami in sight while the taxi waited.

These days, in light of the luxury goods industry’s enormous counterfeit crackdown, that same effort has moved off the streets and underground.

In the last six months, brands such as LVMH Moët Hennessy Louis Vuitton have pumped up their legal pursuits against counterfeiters. And it’s clearly having an impact — walking along sparsely populated Canal Street Thursday, there was nary a fake Vuitton, Fendi, Gucci, Chanel or Dior bag in sight. The closest knockoffs hanging in stalls were striped Kate Spade and Marc Jacobs look-alikes, but none bore any logo or brand. Ironically, there was a tote resembling an “It” bag by Dooney & Bourke — against which Vuitton filed suit for trademark infringement of its Murakami design but was denied motion for a preliminary injunction.

Last month, LVMH successfully sued 29 Chinatown retailers selling counterfeit items, as a federal judge upheld the company’s claims of trademark infringement and ordered each to pay $16 million in statutory damages. Additionally, the judge ordered the vendors to relinquish all imitation bags and accessories. It could be a symbolic victory, though, since Vuitton still has to find the vendors involved, all of whom were identified as John Does in the motion.

Most shopkeepers in the area said they didn’t carry fake Vuitton bags. But the action hasn’t disappeared. Counterfeiters continue to sell fake Murakami and other Vuitton styles from buildings a few blocks from their stalls on Canal Street.

One vendor initially denied she had any fake Vuittons for sale, but her partner followed me out to the sidewalk and said she indeed had some on hand. I told her I was looking for a big Murakami-style bag, but all she offered were small purses or wallets. After calling her brother on her cell phone, she said if I waited five minutes he would bring them. Asked if I could see everything she had before committing to buy, she said, “Follow me.”

She led me to an office building two blocks away on Broadway. Signs outside advertised manicures and pedicures on offer. We went through an unmarked door and went down in the elevator to a dank and muddy basement and entered a hallway lined with storage rooms. She opened a door to a closet-sized space to reveal approximately 20 counterfeit Louis Vuitton bags on display and 40 bagged up to sell.

There were fake Murakami wallets, pochettes and mini Speedy bags in the trademark multicolored monogram and cherry-blossom prints. She also sold copies of the traditional brown monogram Speedy bag and an Epi bag, all from $15 to $45, depending on the buyer’s negotiating skills.

Back on the street, another vendor whispered in that hushed contraband voice, “Louis Vuitton, Louis Vuitton.” Curious whether he had a Murakami dungeon as well (there were none in his stall), I followed him to yet another building a few blocks up on Lafayette. This building was much cleaner and contained a series of shop fronts on its lower level that almost seemed like a minimall. Again I was led to a windowless storage room.

Unlike the first room, this one had a large selection of counterfeit Gucci logo purses and wallets, Dior saddlebags and quilted Chanel bags, none of which I had seen being sold on the street. I asked him about a fake Chanel Ligne Cambon bag, the real version of which is owned by celebrities such as Madonna and Uma Thurman, that was hanging on the wall. A wholesaler from Florida, the vendor said, bought nearly 40 from him at $85 apiece and sold them back in Miami for $400 each.

Clearly, here is where all the counterfeits had gone — into storage rooms like this. There were more fake Murakami bags than I could ever want — although perhaps not enough for some. The selection even included a pink and gold logo canvas Theda knockoff, a style coveted by the designer set.