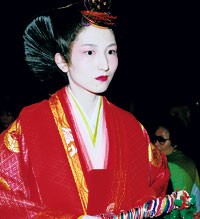 NEW YORK — Kimonos are often hard to come by in the U.S., but they were front and center at three recent Japan-sponsored fashion shows.

Renowned kimono designer Jane Aiko Yamano, a force in Japan’s fashion and beauty industries, has been showing off the traditional garb, including a 12-layer kimono that dates to 1145, during the Heian era, and is of a type generally only worn by the Imperial Family. Many of the styles were made by the Yamano Group, her family’s $1 billion fashion and beauty business.

“I wanted to share the Japanese culture with New York,” Yamano said. “It was 20 years ago my grandmother and I hosted the first kimono fashion show here at Carnegie Hall. Now I’m finally getting to do my own show.”

The main event of Yamano’s visit was a free fashion show for 400 on Monday in Damrosch Park, next to Lincoln Center on Manhattan’s West Side. A tent and “hanamichi” stage built by the Heisei Nakamura-za, a leading Kabuki theater company in Japan, were set up for actual Kabuki performances, which are taking place there through July 25.

Kabuki features performers in elaborate costumes enacting tragedies and comedies through movements, dances and songs. The leader of the 400-year-old, all-male troupe, Nakamura Kankuro V, was among the models in the Lincoln Center fashion show. It is rare for nonperformers to be allowed on the stage, to model kimonos and to be shown dressing on stage, Yamano said.

“Even in Japan, that’s not something you normally see,” she said.

Women began performing kabuki in 1603, but were banned in 1629 because the art form was considered too risqué. Even though traditional kabuki allows only adult men on stage, some women and girls were featured in the fashion shows, which included children’s kimonos, wedding-day kimonos and “fantasy kimonos.” The latter included red, white and blue styles that Yamano made with the hopes of one day showing again in the U.S.

Yamano also hosted events at Parsons School of Design and at the Asia Society, where she fielded questions such as “How do you go to the bathroom in a kimono?” and “What type of shoes do you wear with them?”