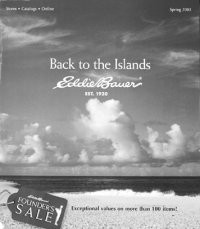 The owner of the Spiegel catalog and Eddie Bauer specialty chain had been under increasing pressure in the past month due to the inability of its credit card operation to meet established financial criteria. This failure meant not only that its customers could no longer use its third-party credit cards to shop for Spiegel or Bauer merchandise, but also that excess cash flow would be directed back to noteholders.

The redirection of cash to investors was triggered by an early amortization or payout event on March 11. In practical terms, cash from operations could no longer be used to fund operations.

Dependency on finance revenues from a credit card operation can be profitable but also fraught with risks. Recently, Sears, Target and Kohl’s have had to address questions from Wall Street regarding their card portfolio risks and delinquencies contributed to Federated Department Stores’ disposal of Fingerhut and Sears’ recent stock declines.

The Chapter 11 filing stops payments on the required payouts in connection with the notes. A $400 million debtor-in-possession financing facility — $150 million is expected to be approved shortly for interim use, with the full amount to be approved later — will help the company with its working capital needs, such as paying its suppliers. Spiegel has not been getting credit from the trade for the last six months or so, with vendors demanding cash up front instead.

The company said Monday in a statement: “While the inability of customers to use their private label cards to make purchases from the merchant companies will adversely affect the company’s net sales, the company cannot yet predict the severity of this decline.”

William C. Kosturos, chief restructuring officer and interim chief executive officer, said Monday in a phone interview that management is “very focused” on obtaining a new third-party service provider, and is in talks with several firms. “We are trying to speed up that transition process. Hopefully, it will be up and running in as early as two months, or as long as three months,” he said.

Credit analysts worry that the delay will erode Spiegel’s customer base. Until a new service is ready for use, customers will have to pay for Spiegel purchases with an acceptable bank or charge card issued by a different financial institution, a check or money order, or cash at retail sites such as its Eddie Bauer nameplate.

According to Spiegel’s 2001 annual report, which it delayed filing with the Securities and Exchange Commission until February 2003, preferred credit card receivables serviced in 2001 were $2.3 billion, representing 3 million active accounts. The filing said that 41 percent of total sales were made with the company’s preferred credit cards, which includes 21 percent of Eddie Bauer net sales; 73 percent of Spiegel’s and 59 percent of Newport News’ sales. The lower percentage of sales on the Eddie Bauer card reflects the higher percentage of retail store sales at the division.

A Spiegel spokeswoman said that 34 percent of total sales were made with the firm’s preferred credit cards in the first nine months of 2002. The company has not yet reported fourth-quarter results.

Of course, like moderately oriented department stores, big general-merchandise catalog operations haven’t fared well in the last several years. Several of the multihundred-page catalogs that used to be sent to homes — Sears, Roebuck & Co.’s and Montgomery Ward’s, for instance — are no longer in existence, suggesting that consumers have changed the way that they shop. Sears sends smaller specialty catalogs to its customers, while J.C. Penney’s catalog has showed signs of stress lately.

According to Kosturos: “Our sense is that it is more of a credit card issue than a catalog problem. The big bucks are not out there anymore.”

Carl Steidtmann, chief global economist for Deloitte Research, said: “The retailer is often the easiest for consumers to obtain credit from. For the retailer, in good times, the business adds to bottom-line profitability. However, retailers do have to pay for bad credit risks. It all comes to roost in bad times.”

Isaac Lagnado, president of Tactical.org, a market research firm, said, “This is the final nail in the coffin of retailers like Sears and Spiegel getting into businesses like credit card management. At best, it distracts from their mission and at worst, it’s catastrophic to their balance sheet, and the default rates of 20 percent-plus are clearly unsustainable.”

For Kosturos, the restructuring focus will be geared toward fine-tuning the merchandising at the different operations. He didn’t rule out the possibility, for example, of eliminating the home furnishings component of Eddie Bauer’s sales.

For now, Spiegel appears intent on keeping its Eddie Bauer division, which it acquired in 1988 from General Mills. Bauer, with 500 doors across the country, is the asset most often cited for a possible sale.

Spiegel’s chief restructuring officer noted that in the last few months, under the direction of Fabian Månsson, the operation has moved “closer to its outdoor heritage and is showing signs of traction.” Månsson, former ceo of Hennes & Mauritz, was appointed president and ceo of Bauer last July, succeeding Richard Fersch.

Gilbert Harrison, chairman of Financo Inc., observed, “The Eddie Bauer name is still strong. Its merchandising and consistency of product have been extremely questionable over the last few years. Where it stands today is anybody’s guess. The number of stores that they have will create a tremendous opportunity for a potential buyer, but on the other hand it may be catastrophic if the merchandise changes are not executed properly.”

Gene Silverberg, executive vice president of Hilco Merchant Resources, said, “The Eddie Bauer brand is still extraordinary. There are mitigating factors regarding the present situation, and it is not necessarily due to fault or presentation. If somebody were to buy it, pare it down to its best locations and focus on merchandising rather than expansion, it is a brand that will survive. Abercrombie & Fitch and the Gap had similar problems. These are still brands that are very good in the eyes of the consumer.”

Spiegel, whose catalog is just two years shy of its hundredth anniversary, was once the name frequently heard by viewers as premium prizes that were given away on such daytime programs as “Let’s Make a Deal.”

Kosturos said that the Spiegel brand identity is “still very strong. It has a great history, but it does need some new merchandising ideas.”

In charge of reinvigorating the Spiegel Catalog and Newport News direct-marketing units is Geralynn Madonna, a 21-year Spiegel veteran who was named president and chief executive officer of the two units on Friday. In her most recent position at Newport News, she oversaw all companywide operations, including merchandising, financial management, product design and development.

Madonna said Monday that her focus will be on reviewing the customer research data on file and work on reconnecting the Spiegel brand with the consumer. The merchandising and marketing focus is similar to what she did at Newport News. About 30 percent of the customers who shop at the Newport News catalog are also Spiegel customers.

According to Madonna, the Newport News customer has a median age of 42 years and an annual income of $50,000. “She is very appearance focused, is romantic and wants to be noticed. She is well-dressed and value is important, both in terms of sale price and quality. The Spiegel customer is older, with a higher annual median income. Value is still very important, but less so than for the Newport News customer,” Madonna noted.

She said she expects to complete an outline for the restructuring of Spiegel’s catalog in the next couple of months.

According to Lagnado: “Although the Spiegel brand is mature and somewhat equivalent to the position of traditional department stores, Eddie Bauer is fundamentally a very desirable brand. I believe the company will emerge from Chapter 11, because of the viability of the brands. Eddie Bauer is particularly valuable, and some of the Eddie Bauer expansion can be pulled back under the umbrella of Chapter 11.”

Kosturos told WWD that it was still too early to tell whether the Otto family from Germany would continue to bankroll the distressed firm. Michael Otto is Spiegel’s chairman, and financial sources said the family has loaned the company about $350 million in the last two years.

The ceo knows he will be busy with the restructuring process. “We remain very committed to providing the customer with the same amount of service and quality. It is business as usual.”

In addition to the restructuring, the company has an ongoing Securities and Exchange Commission matter that is still proceeding. As reported, the company entered into a consent decree with the SEC earlier this month, which required the appointment of an independent auditor to review the firm’s financial records going back to the start of 2000. The SEC sued Spiegel in a Chicago federal district court for failure to disclose material information about its ability to continue operating its business.

Kosturos said, “We are fully cooperating with their investigation. It is too early to tell where that is going to go.”

Bob Carbonell, director of credit at Bernard Sands, a credit reporting agency, said, “We are waiting for the bankruptcy judge to approve DIP financing before deciding what advice to give clients going forward.”

The catalog firm said in its 2001 annual report that it worked with 1,900 suppliers, with none supplying more than 5 percent of merchandise purchased.