For artist Martin Creed, it was paramount that the runners participating in his installation, "Work No. 850," which was unveiled at London's Tate Britain gallery Monday, looked the part. 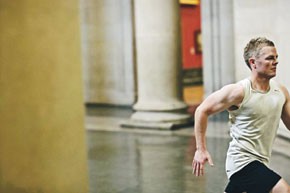 LONDON — For artist Martin Creed, it was paramount that the runners participating in his installation, “Work No. 850,” which was unveiled at London’s Tate Britain gallery Monday, looked the part.

“I wanted the runners to look beautiful. That’s a very important part of it,” said Creed, referring to his installation, in which runners sprint through Tate Britain’s neoclassic sculpture galleries every 30 seconds. The installation was created for the gallery’s Duveens commission.

To wit, Creed tapped Puma to provide the apparel the runners wear during their dashes, which will continue to take place in the gallery through to Nov. 16. “I realized quite quickly that we needed professional help, that the runners had to have good shoes,” added Creed. “That’s how we got to Puma….It’s really hard work running on these hard surfaces — it shakes your bones, people get injured very easily.”

Creed, a London-based artist who won the Turner Prize in 2001 for a piece entitled “Work No. 227: The Lights Going On and Off” — which exhibited lights turning on and off in an empty gallery space — last year collaborated with Calvin Klein on a presentation of the fashion firm’s collections in London. “I think it’s beautiful to look at people running,” said Creed of his latest work. “That’s the idea of the work: to present people running for the enjoyment of the public….It’s something good to look at, which I think art is.”

The runners participating in Creed’s work all wear pieces chosen from Puma’s spring 2008 running collection. The runners also wear selected pieces from Puma’s Runway collection, a fashion-inspired line of athleticwear. Puma-sponsored athletes competing at the Beijing Olympics this summer also will wear some pieces from the Runway line during the Games.

And, while Puma is best known for its expertise in athletic apparel, the brand isn’t entirely new to the art world. Last year, the company launched its Reality bag, a limited edition handbag curated by London’s Serpentine Gallery, which selected a series of artists to contribute to the design. “It’s something that we love to do,” said Jochen Zeitz, chief executive officer of Puma, of the brand’s involvement in the installation. “We’re a brand that’s constantly trying to innovate — [we speak to] the innovators, the early adopters. It makes sense for us because art just inspires, and we want to inspire as a brand and with what we do,” he added.

Zeitz stressed, though, that in terms of Creed’s installation, the artwork, rather than Puma as a brand, is the focus. “I think the artwork does the talking, but we have other ideas that we want to do together,” he said, although he declined to elaborate on details of any future collaborations with Creed. “The artwork is the centerpiece, but we are part of it.”

Creed also said he would welcome the possibility of working with Puma in the future. “I wouldn’t draw a line between design and fine art at all,” he said. “Artworks are designed. All I do is put together colors and shapes for people to look at, and that’s what designers do. I’m making products just like a designer.”