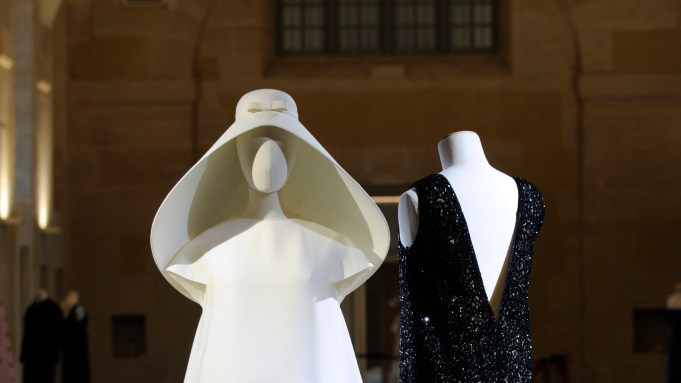 PARIS — It is said that Elizabeth Taylor and Ava Gardner handled the incident with great class and humor: Both actresses showed up at an event in the same silver lamé sari dress from the summer 1965 couture collection of Cristóbal Balenciaga.

That’s just one of the backstories to 27 dresses by the couture great now on display as Kering inaugurates its new headquarters at the former Laennec hospital and opens its doors to the public during European Heritage Days on Sept. 17 and 18.

The dresses line the perimeter of a long, vast room with a vaulted stone ceiling. The circuit opens with simple “semifitted” day suits and dresses and culminates with lavish eveningwear, including a black column with a dramatic, cabbage-shaped cape.

They were selected from around 4,000 objects by Cristóbal Balenciaga in the house’s archives and range from a modest linen suit worn by Marlene Dietrich to a big pink baby doll dress festooned with a giant bow.

Often austere, the founder’s designs sometimes appropriated the everyday garments of fishermen and priests and gave them a high-fashion spin — echoing the way Balenciaga’s current creative director, Demna Gvasalia, has elevated the sweatshirt and the polo shirt worn by Paris firemen with his Vetements label.

Looks date from 1930 — a ravishing, bias-cut silk column — to 1967 — a black cocktail dress with a tiered, feathered skirt — but could easily be worn today. Among landmark designs on display are the Cocoon coat and a Parachute dress from 1952.