Tom Ryan's face lights up when he talks about Lumene. 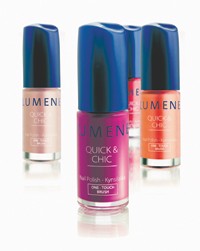 NEW YORK — Tom Ryan’s face lights up when he talks about Lumene. The chairman, president and chief executive officer of CVS believes the line sold exclusively at his chain has made the retailer a bigger beauty power.

“Lumene products are high-quality and our customers understand they can only get them at our stores. The skin care performs as well as national brands and we continue to see greater interest in color,” Ryan told WWD at the recent National Association of Chain Drug Stores’ Annual Meeting in Palm Beach, Fla.

CVS decided to launch Lumene, a line from Finland, in 2003 as a way to differentiate its stores from other drugstore chains. That decision was met with some skepticism at that time from manufacturers who didn’t understand why CVS would seek brands without U.S. advertising. The strategy paid off and even seems to be prescient, considering how major launches from American brands are struggling.

The chain has cleared more and more retail footage to enlarge the Lumene department, which is now near the entrance to the beauty department in illuminated fixtures.

CVS is proving its commitment to Lumene with several new items, part of what it calls its Enchanted Forest collection. Fall shades show that Lumene is not only on the forefront of fashion trends, but also of technology developments, according to Janice Jacobs, director of brand development for CVS.

For example, a new Beauti-Full Plumping Lipshine featured in the lineup combines technology to stimulate collage production, with natural, Arctic ingredients to create a creamy formula. There’s also the Delight Duo Eye Shadow, a wet and dry formula priced at $6.99.

“We are especially excited about the Quick & Chic Nail Polish,” said Jacobs, as she demonstrated the new One Touch Brush technology. The flat-shape One Touch Brush is actually a combination of two separate brushes fused together to conform to the shape of the nail, creating a perfect, even coat of color in one stroke.

In skin care, the backbone of Lumene in America, the company is introducing Lumene Vitamin + Radian Dual Serum, a solution to the skin’s changing biorhythms. Packaged in a dual-chamber bottle, the product is perfect for travel since it houses a day and a night serum. The suggested retail price is $17.99. Another innovation is Time Freeze, which consists of a treatment and a mask. Research found that 92 percent of women tested saw a difference in fine lines with use. “We have many loyal and repeat customers to Lumene skin care,” Jacobs said.

This story first appeared in the May 19, 2006 issue of WWD. Subscribe Today.

“One of the things we are doing now is better communicating the Lumene ingredient story,” said Jacobs. That message revolves around the natural ingredients in the products such as Cloudberries, Arctic Peat and pure Finnish spring water. CVS will convey the brand’s message via in-store materials, advertising and its ExtraCare frequent shopper card. CVS hopes to expand Lumene’s reach with introductions in sun care and other categories.

Olli Vahanen, vice president of marketing for Lumene, said CVS shoppers are also discovering that the brand appeals to all skin types and skin colors. “The natural products help draw customers in and they are finding our color ranges are right for them, Vahanen said. CVS has become so important to Lumene that the company has established a U.S. office in the Boston area headed by Joe Pastorkovich, vice president.

CVS is also one of the major chains experimenting with service skin care centers selling European skin care such as Vichy and Avene. Vichy has taken an active role in public education surrounding the prevention and education of sun damage and its risks. The company, which is gaining distribution in U.S. retail stores, is building Healthy Skin Check-up Centers in major markets where experts provide personalized skin checkup and information about skin health. The first kicked off in Rockefeller Center in New York, followed by similar centers in Boston, Philadelphia and Washington.