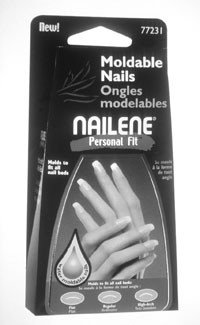 SKILLMAN, N.J. — Thirteen-year-old Kate Klinck isn’t allowed to visit the salon for professionally applied artificial nails. But she has become adept at gluing on fake nails she buys at the local Wal-Mart. She buys them for special occasions like dances.

Klinck isn’t alone. Many teen girls, as well as women opting to save money by doing nails at home rather than at the salon, are devoted customers of artificial nails. After years of decline, some mass market experts think the artificial nail category is ready for a rebirth. “The factors that have kept people away, such as length [of the nails], are not issues anymore,” explained Grace Tallon, vice president of marketing at Kiss Products.

The category could use the boost. Artificial nail sales declined 3.8 percent to $86 million for the 52-week period ended Feb. 24, 2004, excluding Wal-Mart. Overall nail care declined almost 4 percent to $591 million for the same period. In the past, retailers took solace in the fact that nail care was growing as women sought methods to grow natural nails. But even that category is on the decline. Sales of treatments dropped 3.5 percent to $306 million.

That downturn is encouraging retailers to take a new look at the artificial category. Marketers, too, are scrambling for ways to bring back what was once a big money maker, especially for the drugstore channel. Many chains have reset nail departments and condensed space devoted to artificial nails in favor of more treatment. The pinch caused a consolidation in the market. The brands remaining are nailing down strategies to enlarge sales.

Artificial nail sales dried up for a variety of reasons ranging from fear over nail infections to the trend toward blunt and unpolished nails. Manufacturers are seeking to overcome these obstacles.

Fing’rs is currently shipping a new nail glue that promises to ease the process of applying and removing fake fingernails. Fing’rs Liquid Press-On Temporary Nail Glue offers the same convenience of press-on tabs with longer wear. The glue is brushed on and the nail is applied. The nails can be peeled off without the need for acetone. The new glue carries a suggested retail price of $2.99

Kiss Products, through its Broadway Nails division, is introducing Real Life nails, which, according to Tallon, are even shorter than an active length. “This takes away the fear of not being able to type or just live life,” she said. Since the nails are so short, a special tab has been put on the ends to assist in application. The tabs are removed once the nails are applied. The suggested retail is $5.49.

Kiss has also improved the assortment of its CustomFit collection. “The number-one reason people don’t use artificial nails is the fit. We’ve done everything we can to ensure they will fit.” According to Tallon, French Manicure designs are the fastest sellers in artificial nails.

Pacific World is hoping a well-known brand name will entice users. Pacific World, which also makes Nailene, has partnered with Revlon for a collection of 23 stockkeeping units that started shipping last January. There are both press-on and glue-on nails, as well as nail glues. According to Kenneth Robinson, vice president of marketing for Pacific World, there is low brand awareness outside of the category. Therefore, the Revlon name could lure new users.

Under its own logo, Nailene is trying to get people to try artificial nails that are designed to fit better than what is currently on the market. New for Nailene are Personal Fit and Perfect Fit Nails. Personal Fit are moldable nails using hot water to help create a snug fit. Perfect Fit was created for women with flat or high-arched nails.

Rite Aid, Walgreens, CVS and Target are among the chains recently resetting nail walls to reflect bestsellers. CVS, for example, positions the department next to implements and has cut the sku’s by about 20 percent over the past two years. The items are hung according to brand in a section that is neatly organized and easy to shop.

Frequent shopper programs have become a crucial marketing tool for mass market retailers. Unfortunately, many retailers have mounds and mounds of personal information about their loyal shoppers that they aren’t utilizing. Larry Aronson, formerly of Revlon, is hoping to help retailers make use of that valuable information. Aronson and his partner, John Wilson, have formed a company called Cartwheel LLC.

The question of why the deal to sell Eckerd Drug is taking so long came into focus this week as J.C. Penney announced its asking price of $4.37 billion for the drug chain. Analysts had put the value of the 2,700 stores between $3.5 billion and $4.5 billion. The speculation is that bids have been on the low side. Jean Coutu and CVS still head the list of candidates, although Rite Aid is mentioned by sources close to the deal, as well. The chance of the chain being sold as a whole is dwindling as time passes.