Britney and J.Lo gave mass market fragrances a jolt. Can Minnie Mouse, Strawberry Shortcake, Nemo and Cinderella do the same? 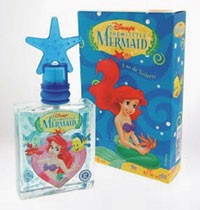 Air Val International of Barcelona, a Disney-licensed partner, and Miami-based Camrose Trading Inc. will unveil a line of juvenile fragrances to the United States at next month’s ECRM Fragrance and Cosmetics Conference in Pittsburgh.

Licensed properties are enjoying consumer demand, led by celebrities and the popularity of categories such as bath and oral care. In total, according to Disney statistics, sales of Disney Consumer Products hit $23 billion in 2006. Disney characters appear on everything from diapers to snacks.

Air Val secured the rights in June for distribution of juvenile fragrances bearing popular Disney names from “Cars” to “Pirates of the Caribbean.” There are also scents based on the different Disney princesses, which are among today’s hottest licenses, according to retailers, who said girls are obsessed with anything having to do with princesses.

In addition to more than 16 current properties, Air Val hopes to capitalize on future Disney efforts by releasing new scents based on Disney releases.

The juvenile fragrance business has been a tough sell in the U.S. in the past. Although Tinkerbell had a following, attempts from companies including Bonne Bell with Bottled Emotion and Caboodles didn’t attract young fans. Probably the best success has been MaryKateandAshley, but that targets a slightly older audience.

John Bauersfeld, vice president of sales, Disney Fragrances, a company helping get the collection out to retailers, thinks that is all about to change. “These products are perfect for grandparents to buy, and we’re also trying to appeal more to boys. The scents are light, and the packages are designed around the logos,” he said.

There are unique links to the properties, such as a strawberry on the cap for Strawberry Shortcake. And Vera Wang’s Princess has nothing on Cinderella — there’s a cute crown cap on the Disney Cinderella bottle.

There are body sprays as well as light eaux de toilette, all priced under $12. There are also gift sets such as those packaged in a lunch box for $19.95. The target age group is four to 10, although Bauersfeld doesn’t rule out older kids who buy the products for nostalgic reasons.

The team launching the fragrances in America hopes younger consumers will adapt to the idea of body sprays, which have traditionally been better received in Europe.

Merchandising of licensed products is evolving in mass market retailers. Several chains, especially those with apparel, are tinkering with mini Disney departments offering products from all categories. Market reports are that Wal-Mart will be experimenting with a Disney department. Kroger has also been a Disney partner with a huge food and general merchandise boutique tied to the Disney Magic theme.

For those without boutique approaches, Bauersfeld recommends merchandising the fragrances in the cosmetics and fragrances department. “Just not under glass,” he added, since the products tend to be bought on impulse.

Fixturing behind the Disney juvenile fragrances will feature both a counter and floor-stand display complete with testers. Although there is no specific advertising behind fragrances, Bauersfeld said the scents will benefit from Disney’s overall marketing efforts.

“This is basically a new product line from a well respected name that will bring new interest to juvenile personal care and, we hope, with little price competition,” he said. He added that the line is so broad retailers can cherry-pick what they want so they don’t offer the identical selection as competitors down the block.

Retailers hope the Disney allure can ignite fragrance sales. “We are faced with ways to get more dollars out of existing consumers and if kids’ fragrances can do it, then that’s a happy ending,” concluded one beauty merchant with two daughters who are princess fans.