Getting into a retailer's door is never easy for a manufacturer. 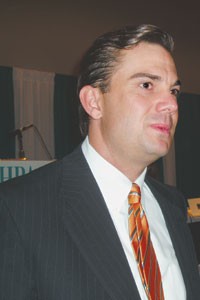 NEW YORK — Getting into a retailer’s door is never easy for a manufacturer.

During a session called “Industry Movers and Shakers: The People Who Make Things Happen,” companies small and large said they harnessed everything from dumb luck to top-notch marketing savvy to secure success for their brands.

For a corporate view, Michele Johnson, vice president of marketing for Revlon, shared the thought process behind the company’s relaunch of Age Defying. Revlon noticed that its breakthrough antiaging product was starting to “show” its age. Launched in 1994, when few marketers talked about fighting aging, Age Defying had been joined in 2004 with a host of similarly positioned brands. “It was time to modernize,” said Johnson.

After carefully considering whether to eliminate the brand and start from scratch or give a solid franchise new life, Revlon decided to reformulate and repackage Age Defying with Botafirm and give it Revlon’s 360-degree marketing treatment.

A new face, actress Susan Sarandon, was tapped as the perfect image of a woman fighting the aging process. New red packaging replaced outdated black caps and the advertising message was reiterated at the store level. Revlon soon found that a 10-year-old brand was showing sales gains of more than 28 percent. For Revlon, a carefully planned restaging of a known brand was the ticket to maintaining and, in some cases, expanding space.

Within Puig’s Fragrance and Personal Care division in North America, the ticket to instant retail credibility was to import an already proven celebrity brand in Europe to America. That task fell upon Vince Colonna, an American manufacturing expert with experience at large firms, including Revlon and Procter & Gamble. Puig already had established a position in the U.S. prestige market with names such as Prada and Paco Rabanne. But the challenge of entering the fiercely competitive mass landscape remained.

“The right program was starting with Spirit Antonio Banderas,” said Colonna, executive vice president and general manager of Puig Fragrances and Personal Care, who believes the men’s scent is the perfect marriage of a great juice with a perfect celebrity — one who scores high with men and women of all ethnic backgrounds. “The fragrance was one of the first examples of the ‘masstige’ movement,” he added. It also emerged at a time when retailers were hungry for men’s fragrances, a portion of the market that is showing promise in stagnant times.

One year later, Puig followed up with an Antonio Banderas scent for women. Colonna admitted that a well-known celebrity name brings instant attention to a fragrance and that without Banderas, the fragrance would have trouble cracking the mass market. Mass fragrances, he pointed out, are misnomers since prestige scents account for 60 percent of all sales in mass — whether the brands are sold directly or diverted. The combination of Banderas and the deep pockets from the company’s headquarters in Spain helped mark a successful debut of Puig’s North American fragrance business.

Sometimes the coffers are not so well financed. That was the case with Dlish Fragrances and Dessert Beauty. Alexandra Zanella, vice president of both firms, told of the company’s “ignorance is bliss” sales success story. Zanella was friends with Randi Shinder, who stumbled upon the idea of a fragrance that smelled clean. Neither had any experience in beauty, but went ahead with plans to launch a fragrance. The scent Clean was born and eventually followed up by scents based on freshly baked goods and fronted by Jessica Simpson. Zanella’s hard work knocking on doors, coupled with a growing trend toward gourmand scents, helped Dessert capture the interest of Sephora and Nordstrom. At the same time, the celebrity craze erupted and Dessert was a fast addition to retail shelves. The company took advantage of the buzz and added two offshoots, namely Dessert Treats for drug chains and, most recently, a Wal-Mart exclusive called Sweet Kisses. With little retail experience, Zanella survived on her instincts to get appointments and said she was fortunate to sell products that truly were on the cutting edge to achieve shelf space in hot retailers such as Sephora.

Without a celebrity to call his own, Chris McClain had to fall back on his knowledge of what consumers want. That insight was gleaned during his six years as a buyer for Wal-Mart. McClain, now president of Advanced Beauty Systems, left Wal-Mart to join Naterra International, where he nurtured two brands — Skin Milk and Timeblock — into successful product lines that caught the eye of executives at Helen of Troy, which acquired both lines. Then he created Advanced Beauty Systems, which has items that tap into the needs of growing markets, including the demand for shea butters as well as products linked to feeling and looking well under the Bodycology logo. He said these brands will expand organically as more retailers pick them up based on sensational sell-through at existing accounts.

For the future, he said he sees more retail space for his brands as he uncovers new product areas. “Everyone in the future will be more concerned with health and how beauty relates. We’ll all watch what we eat and use….We’ll all know our BMIs (body mass index),” said McClain. “Bodycology is a feel-good brand.” Although his company is small, he hopes to net retail real estate with products that are ahead of the less nimble manufacturer’s production curve.