For a season originally inspired by vacations, cruise is certainly working overtime, eclipsing fall and spring runway collections in scale and growth. 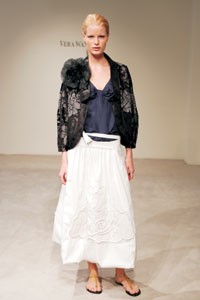 PARIS — For a season originally inspired by vacations, cruise is certainly working overtime.

Indeed, the season has so far eclipsed runway collections in scale and growth that some are questioning the logic of the current international fashion calendar, stopping short of demanding an immediate upheaval.

“[The shows] now serve to give you a jolt of the most creative fashion that delivers in the peak of season,” Gold said. “It’s still very legitimate. But should there be an emphasis from an editorial and runway standpoint on those early deliveries? I think that would be healthy for the business.”

“In an ideal world, it could make a lot of sense, especially if you consider the houses that develop collections in Italy,” he said. “Everybody goes on vacation in August, and there is always such a crunch time to develop spring. I am all in favor of showcasing resort with the same importance as spring. More selling earlier will be better for everybody.”

Even if designers are not yet ready to advance show dates, they acknowledge the pressing need to deliver goods to stores earlier and earlier.

Accounting for between 70 and 80 percent of total spring-summer sales, cruise collections are becoming ever more expansive and newsworthy, garnering more editorial credits and finding their way onto more red carpets, advertising campaigns — and even some designer runways. It’s all thanks to cruise’s most enduring and attractive feature — a luxuriously long selling window.

“More and more, the level of sell-through is driven by early deliveries,” said Valerie Hermann, ceo of Yves Saint Laurent in Paris. “You have three months more to sell than the runway [line]. We all know in this business that earlier is the best.”

To wit: The French house just advanced its wholesale campaign by three weeks to ensure cruise starts flowing into stores by the end of October. It also beefed up offerings of cocktail and eveningwear to capitalize on pre-holiday demand for occasion clothes.

This story first appeared in the June 21, 2005 issue of WWD. Subscribe Today.

The growth of the cruise or resort delivery has been dramatic in recent years.

“I would say that over the past five years, its sales volume has doubled,” said Mark Lee, president and managing director at Gucci, where cruise now represents 25 percent of annual sales, or 80 percent of the spring-summer alone. Of the balance, 10 percent is generated by its “spring one” delivery and another 10 percent by the fashion show collection shown in late September-early October.

“Cruise, which is a full-range collection that now also includes luggage, drives our fourth-quarter business, especially in accessories,” Lee said. “Though it was an American invention, it is now a worldwide reality.”

Hermann noted that YSL’s cruise collection today spans 450 references, including handbags and footwear, more than triple the size it’s been in the past. “It’s not only some T-shirts to go to the beach,” she quipped.

At Giorgio Armani, sales of cruise collections are up between 3 and 5 percent from a year ago. “In particular, the cruise collection is growing in the U.S. and Northern European markets,” Armani said. “We consider cruise a good harbinger of first-half 2006 [spring-summer] sales. As it represents a significant part of the group’s sales, we are devoting more marketing and promotional efforts to cruise.”

Robert Duffy, president of Marc Jacobs, said cruise tends to sell well because, come November, the customer already has seen and bought into fall and is looking for new merchandise.

What’s more, “we sell a lot of resort merchandise as Christmas presents” in Marc Jacobs’ own stores, he added. “They don’t want stuff that will be marked down in January. Resort has turned into a big Christmas-item business for us.”

“There was a time, years ago, when you saw just a couple of months of editorial on resort,” Duffy said. “Now, you see that [when] resort becomes more important editorially, more celebrities will wear it and so more consumers will buy it. It’s become another complete season.”

At Chanel, cruise now represents about 20 to 22 percent of annual sales, versus roughly 10 percent a decade ago, according to Chanel SA president Francoise Montenay. “It began in the U.S., for the ladies who were cruising in December. Now, it’s selling all over the world,” Australia being a rare exception, she said. “For various countries in Asia, it is very important and we are adding lighter fabrics and lighter clothes.”

Indeed, Chanel stages runway shows in Paris for cruise — the most recent one on a fleet of vintage buses; the one before that, on a riverboat. That fact compels designer Karl Lagerfeld to inject more and more fashion into the delivery, Montenay said.

Yet cruise collections often have been derided as “commercial,” a description vendors contest. They stress the importance of fresh colors and novelty to excite the consumer, and note that the season can be the springboard for new clothing trends and even signature handbags.

“It’s important to stress that cruise, which is part of our pre-spring seasons, is, nowadays, a real collection in terms of design, fabrics, textures and prints,” said Vittorio Missoni, marketing director and sales manager at Missoni. “That means that, from a design standpoint, there’s a lot of energy involved because we actually use some cruise looks in the runway show and in the ad campaign. This goes to show that they’re a far cry from the basic collection they used to be years ago.”

According to Vera Wang president Susan Sokol, cruise is increasingly about great items the customer wants to wear right away, not just pieces suitable for vacations.

“It’s about an impulse buy — something that they can buy, wear now; something that makes them feel good,” she said. “There is still a take-away component, but more and more, it is about the fashion customer who sees something and really wants to spruce up her fall wardrobe.” At Vera Wang, the top resort classification is tops, from woven embellished to embroidered looks.

Sokol said she sees no reason the strength of resort wouldn’t extend into other categories.

“I think that some of the accessories categories definitely can play off of the different seasons, whether it’s shoes or eyewear. It gives us a reason to sell more product.”

As for resort’s influence on spring, Sokol added: “I think it sets a template for spring. There is a correlation between resort and spring. Spring just takes it to the next step.”

Still, some big houses are relatively new to the cruise game.

“This is the first cruise collection that we have presented since Gianni Versace passed away,” said Loredana Nastro, director of wholesale business at Versace. “Now, more than ever, there is a growing necessity and interest in cruise collections because people travel to warmer places in the winter or they are just very interested in purchasing new individual pieces for the upcoming season before anyone else. We have seen a strong trend for modern, glamorous and sophisticated clothes that never sacrifice style.”

In fact, Nastro said buyer reaction was so strong that the essence of Versace’s cruise collection “will carry over into spring-summer with a return to sophisticated, glamorous pieces that have that individual, modern Versace edge.”

Silk printed dresses were the best-booking styles for cruise at Versace. Other hot categories and items for the season include daywear and casualwear at Armani; knitwear, especially striped T-shirts, at Sonia Rykiel; “little sexy dresses” at Marc Jacobs; a green tweed jacket with epaulet detail and matching shorts at Chanel, and embellished and embroidered tops at Vera Wang.

Cashmere is a top cruise category at Michael Kors, and ceo John Idol said the embroidered cardigan was a big hit this season. Other top trends include madras plaid prints in cotton and taffeta leaf prints.

Emboldened by strong sales, several vendors plan to increase promotional and marketing efforts around cruise. For example, Gucci is planning a worldwide advertising campaign in support of cruise, the first collection designed by women’s creative director Frida Giannini, Lee said. It will break in November and December magazines, and also will spotlight new shoes and bags.

“It corresponds to our focus on increasing communication-advertising spending to support our strategic goals and capitalize on the strong sales growth we are presently experiencing worldwide with the Gucci brand,” Lee said.

Despite the apparent out-of-sync nature between sales patterns and the shows, organizers say the timing of fashion weeks won’t change for now. Manufacturers say they need to spread out their production of spring collections over three months.

Mario Boselli, president of the Camera Nazionale della Moda Italiana, said he has considered moving up dates of the runway shows or floated the idea of having earlier presentations for buyers and later shows for the press, but designers have consistently nixed the idea. He said designers want to unveil their collections simultaneously to the retailers and the press, and do so with a strong message and impact.

Didier Grumbach, president of the Chambre Syndicale, French fashion’s governing body, said there was no need to alter the existing runway schedule, especially since most buyers come to Paris for the January and July haute couture shows, and then also order pre-collections and cruise. “It’s one of the reasons that the haute couture is coming back,” said Grumbach. “It shows that you don’t need a show for important orders to be taken. But, of course, you need a show for other reasons, to reach out to the customer.”

Retailer Carla Sozzani, owner of 10 Corso Como in Milan, agreed fashion shows are mostly communication vehicles for the press and the public since retailers already have done 75 percent of their buying.

“Journalists come to me and they say, ‘This is nice,’ and I say, ‘It’s pre-collection,'” she said. “I think it would make sense for the press to see everything.”

Fern Mallis, executive director of 7th on Sixth and vice president of IMG, which organizes New York Fashion Week, said she is exploring the potential of an organized bridal week, but cruise does not represent a pressing need to put up tents in the middle of summer.

“I don’t think that resort at this moment will replace the entire spring calendar,” she said. “We would consider creating a smaller, organized resort week if that’s what the industry is interested in.”

But “right now, the world is not coming here for resort,” she continued. “While this is important domestically, it doesn’t have that global impact that spring has in the calendar.”