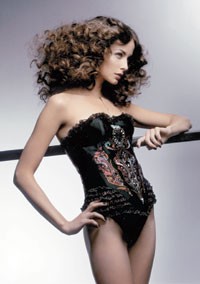 NEW YORK — Swarovski is lending a new sparkle to lingerie.

The crystal specialist presented what it described as a couture collection of crystal-embellished lingerie and swimwear at the Swarovski Creative Service Center here on Wednesday. The collection, which can be viewed by appointment through April 20, features one-of-a-kind items by designers such as Vivienne Westwood, Roberto Cavalli, Christian Lacroix, Christian Dior and Andrés Sarda.

Swarovski’s expansion into lingerie began in January when the brand hosted its first-ever fashion show at the Salon International de la Lingerie in Paris, which underscored the idea that “crystal as a creative material knows no boundaries,” said Rita Nakouzi, a senior consultant of Promostyl, an international trend forecaster.

Nakouzi, who has been a trend partner with Swarovski since 2001, was the host at last week’s event with designer prototypes and a video presentation that represented spring-summer 2005 trends. The show was staged in Swarovski’s “crystal playroom” and featured 300,000 different crystals.

“By bringing lingerie designers here, we learned about the different fabrics and the needs of lingerie fabrics in particular, and we’ve customized the application processes,” she said. “Lingerie is so delicate. So we created a new crystal called Zillion, which requires less heat transfer to apply to lingerie fabrics.”

Nakouzi identified five different types of women for whom the “glittering flash” of crystal-embellished lingerie can be visually interpreted. They are: The Conceptual Woman, The Sensual Woman, The Classic Woman, The Seductive Woman and The Rebel.

“The Conceptual Woman takes a holistic approach to life and uses technology to create an easier lifestyle by creating harmony with nature,” said Nakouzi, noting that this woman likes crystal combined with high-tech fabrics and graphic shapes.

In contrast, the Classic Woman has a “passion for good taste and elegance,” said Nakouzi, noting she “will revel in the additional seductive touch of crystal trims and practical features” in old-fashion, lace-trimmed lingerie of ivory, carmine red, plum, black and chocolate. Key brands include La Perla, Wacoal, Chantelle and Simone Perele. Icons include Gwyneth Paltrow, Sophie Dahl and Catherine Deneuve.

Nakouzi described the Rebel as “childlike, but sexy.” For her, crystal is multifaceted and reflects an ability to play with colors, fabrics and materials to suit different desires. This includes transforming lingerie in a crossover item.

“She never follows rules, she creates her own rules,” said Nakouzi.