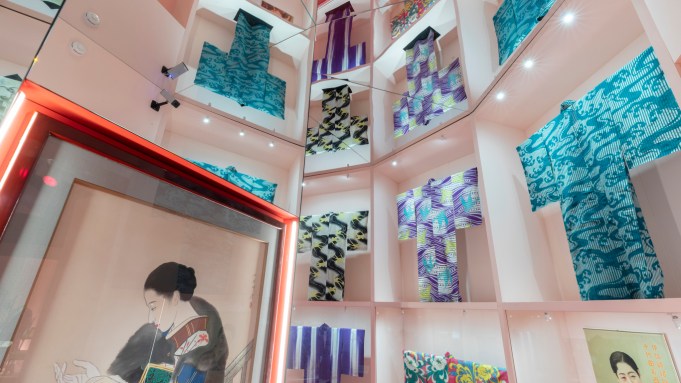 Kim Kardashian surely went too far when she attempted to name her bodywear brand Kimono.

Yet Japan has largely looked kindly on how this robe-like garment has fascinated the world and inspired fashion over centuries.

So say Anna Jackson and Josephine Rout, curators of “Kimono: Kyoto to Catwalk” at the Victoria & Albert Museum in London.

Jackson is keeper of the Asia department at the V&A and curator of the exhibition, which ran through Oct. 25, while Rout is the exhibition project manager. Here, they discuss the garment’s rich history, meaning, tributes, and the ground rules about wearing one.

WWD: How old is the kimono, and when did it first start having an impact on fashion in other parts of the world?

Anna Jackson: The garment has a history that stretches back over a thousand years. By the end of the 16th century, the kimono had become the principle garment for all Japanese regardless of their gender or social status, and by the mid-1600s, a vibrant fashion culture had started to emerge. For most of the Edo period (1615 to 1868) Japan operated a “closed country” policy that severely restricted foreign relations. Despite this, Japan was part of a dynamic global network of cultural exchange.

The Dutch East India Company (VOC), who were permitted to trade in Japan, were given kimono by the shōgun (ruler) and senior daimyō (lords) which were sent back to the Netherlands. The brightly decorated silk kimono caused an immediate stir and, realizing their popularity, the VOC commissioned versions from Japanese artisans with slightly adapted sleeves and thick wadding. These robes were soon being copied by European tailors and became a popular choice for informal, at-home wear, symbolizing status and style, as well as a sense of engagement with the wider world.

In the late 19th century, after the country was forced to open its ports to foreign trade, the large-scale export of silk and other artistic goods became pivotal to the Japanese economy. In Britain, Europe and America this sparked a vogue for all things Japanese including kimono, a garment imbued with the perceived novelty and exoticism of Japan. The kimono craze led Japanese makers to create specific “kimono for foreigners” in lustrous silks with bold embroidery. These became an important element in the wardrobe of fashionable women, such as the American socialite Emilie Grigsby.

WWD: In the context of 20th-century and 21st-century fashion, are there certain designers or houses who owe a debt of gratitude to the kimono, or who revisited it frequently?

A.J.: In the early 20th century, the kimono exerted an enormous influence on European fashion as designers such as Paul Poiret, Mariano Fortuny, Jeanne Lanvin and Madeleine Vionnet abandoned tightly corseted, highly structured styles for less tailored layers of fabric that draped the body. Since then, international fashion designers have continued to absorb the tenets of kimono. John Galliano, for example, has long been fascinated by East Asian dress and the kimono has been the source of inspiration for some of his most important collections. Galliano incorporated kimono elements in his seminal 1994 collection and the garment was central to his 2007 couture collection for Christian Dior. Alexander McQueen also frequently referenced kimono. For him, it was a garment that could embody a futuristic modernity while also being a vehicle for exquisite material and craftsmanship. Japanese designers such as Issey Miyake, Yohji Yamamoto and Junko Koshino have also drawn on their kimono heritage, while Sydney-based fashion designer Akira Isogawa is celebrated in his adopted home for creating designs that merge kimono elements with a relaxed Australian attitude.

WWD: Did any of the designers you mentioned step over the boundaries when it comes to cultural appropriation? Who are the watchdogs calling out inappropriate use in Japan?

Josephine Rout: These designers have ensured that kimono inspiration is about creative transformation rather than pastiche and cliché, and their work is not generally considered inappropriate in Japan. Rather, it is seen as an appreciation of kimono. While there is a small, but vocal, group of people who believe that kimono should only be worn in certain ways following rules that were established relatively recently, they are not concerned with kimono-inspired garments as they don’t consider them true kimono.

WWD: Most fashion curators/historians suggest Japan has largely been happy that the kimono is so appreciated by fashion designers. What’s your sense of whether that’s true?

A.J.: This is largely true as the kimono has become an important way in which Japanese people share their culture with the world. We have worked with many colleagues in Japan, including a kimono expert from Bunka Gakuen University, as well as contemporary kimono designers, who have all been thrilled that there is such global interest in the kimono. While there is a kimono revival in Japan, the industry itself has a precarious future that depends upon the garment remaining a dynamic part of fashion.

WWD: Claims of cultural appropriation are on the rise generally in recent years. Is this the same for the kimono?

A.J.: Cultural appropriation is a complex and sensitive issue. While there are many cases of quite clear cultural appropriation, whereby elements of a marginalized culture are exploited by a dominant one (often the very power that suppressed that culture in the first place), the wearing of kimono and kimono-inspired garments is not quite so straightforward. It has been interpreted as a modern manifestation of 19th-century cultural imperialism, the objection often based on the notion that the kimono has specific national and traditional significance that should remain unsullied.

The danger of such criticism, however, is that it can fall into the trap of reinforcing the stereotype of Asian clothing as unchanging costume, something that denies the kimono both its own sartorial history and its part — since the 17th century — in an ongoing, complex and vibrant international fashion network. It is also important to recognize that, while the power balance has not always been equal, Japan has had agency in the way in which it presents itself, the way in which it has created and sold kimono to export markets, and more recently through the Japanese government’s efforts to promote the nation’s culture as a form of “soft power” through its “Cool Japan” strategy.

WWD: Madeleine Vionnet was very inspired by the kimono for her dress constructions. Is that appropriation?

J.R.: Madeleine Vionnet’s work was inspired by kimono, but what she then did with this was so subtle and innovative that many would not be able to instantly identify kimono in her work. Appropriation is when recognizable elements of a culture are heavily lifted, often without any research or interest in that culture, largely for economic gain and usually at the expense of the people from which it was taken.

WWD: Was Kim Kardashian’s attempt to use Kimono as a brand name appropriation?

A.J.: It is clear that Kim Kardashian did not mean to cause offense by using the word Kimono for her brand and she listened to criticism and responded to the public request to change the name of her shapewear brand. We hope that this incident and our exhibition will encourage people to learn more about kimono.

WWD: Are there any other clear examples of what you consider appreciation and appropriation?

J.R.: Katy Perry’s outfit and performance at the 2013 American Music Awards was widely called out as cultural appropriation and yellow face. The condemnation was not based purely on her wearing kimono, but the way in which it was worn. Perry’s mixing of Japanese kimono with the Chinese qipao angered those who saw it as a lazy conflation of East Asian cultures, while her misinterpretation of geisha was based on 19th-century orientalist stereotypes of the entertainers as overly sexualized yet subservient women. Perry has since apologized for her past of cultural appropriation as this was not the only instance.

WWD: What about ordinary consumers? Are they able to wear kimonos without fear of offending anyone? Are there guidelines for this?

J.R.: People can wear kimono, but it’s always best to be mindful of what you are wearing and how. Are you wearing it out of respect or are you wearing it as a costume based on stereotypes? To wear a kimono with obi [a sash for traditional Japanese dress] is not straightforward and does require some study, with many people outside of Japan learning through books and online tutorials. One of the most important things to remember when wearing kimono is that it should always be worn left side over right.

WWD: In your view, how should fashion change and adapt given current sensitivities and values, and what can we learn from the kimono example?

J.R.: Fashion should always reflect contemporary political concerns and issues. If it does not, then it ceases to be culture and is purely a capitalist system. Today, there is no excuse to feign ignorance about other cultures. Designers need to ensure that they properly research and respect the cultures that they are inspired by and work with people from those cultures to ensure they do not offend or exploit them.