WWDMAGIC is kicking off with various new vendors as competition heats up in the apparel industry. Show officials said many categories will hit capacity, and others are boasting strong increases from one year ago. 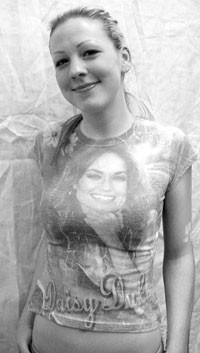 WWDMAGIC is kicking off with various new vendors as competition heats up in the apparel industry. Show officials said many categories will hit capacity, and others are boasting strong increases from one year ago.

As of press time, the contemporary category and women’s sportswear and dresses both have experienced a 24 percent increase, while juniors’ reported a 7 percent jump.

One notable change on the market floor is the closing of the in•dex enclave, a juried group of designers in the contemporary category that has been open for two years. For the most part, vendors from in•dex will join its brother half at the men’s show, creating one-stop shopping for retailers. However, a few, including Laundry by Shelli Shegal and Gasp, will stay behind and merge into the women’s group.

The contemporary category, which many vendors said is booming at retail, also will be joined by first-time exhibitors C&C California and Jack Star Jeans, both based in Los Angeles.

Jack Star is offering nonstretch jeans in deep indigo and stretch jeans done in gray tints. The line, which is already known for its contemporary styles with higher rises, is adding a 9.5-inch rise to the collection, according to owner and designer Angie Furlong. Wholesale prices range from $66 to $80.

Furlong, who has worked for Lucky Brand Jeans in the past, said the denim category is one of WWDMAGIC’s strengths.

“If you’re a denim resource, you have to be there,” she said.

Denim’s hefty presence within the contemporary category also is bolstered by the arrival of Jelessy, a six-month-old line from L.A. that features denim jeans, miniskirts and blazers garment-dyed in a host of colors. Wholesale prices range from $48 to $98.

Owner Steven Shaul also is presenting the company’s new collection of bottoms designed in cotton piqué that is treated to resemble faded denim, as well as Red String by Jelessy, a licensed line with the Kaballah Centre in L.A. that features tops embellished with images from the Kaballah. Wholesale price points range from $34 to $35.

Another new contemporary denim resource is Little Big Limited Edition, from New York-based LTB. The 15-piece spring collection features jeans in stretch and nonstretch cotton that are embellished in rhinestones. Wholesale prices range from $48 to $58.

Consumers’ love affair with licensed products isn’t cooling, and the business model is serving many in the contemporary area, including San Fernando, Calif.-based Jem Sportswear. Its stable of licensing deals includes Vintage Barbie, Vintage Coke and Disney Classic. Bowing at WWDMAGIC this season is the company’s first line done in partnership with a celebrity, who in this case is Ryan Seacrest. The “American Idol” host, who also is the morning DJ on KIIS-FM (102.7) in L.A., is drawing the designs for the cotton

For its part, Jem said its relationship with Seacrest provides valuable p.r. for the line. He’ll be announcing a fashion show on MAGIC’s opening day.

“He can talk about the line on his morning show and even get photographed wearing it,” said Randi Kagan, director of marketing for Jem. “Depending on how successful we are with it, we may partner with other celebrities.”

Jem is showcasing new licenses in conjunction with “The Dukes of Hazzard” and Kellogg’s, as well, with wholesale prices ranging from $14 to $30.

“The Dukes of Hazzard” line comprises knit tops incorporating printed scenes from both the original Seventies television show and the new movie due out in July. Vintage touches include destructive washes for a distressed look and embellishments such as charm pins and rhinestones.

The same detailed approach is used in Jem’s Kellogg’s line of cotton Ts. For the looks, rhinestone embellishments and sequins accent archival images ranging from mothers feeding their children to kitchen scenery from yesteryear and today’s Tony the Tiger.

“It’s all about being more glitzy,” said Orna Stark, president and creative director of Jem.

Innerwear is getting play outside of the home at the Scanty booth in the young contemporary section. Micky Sills, the founder of the former underwear line based in Venice, Calif., sold it to SBH Intimate Apparel and remains as creative director. Under new ownership, the line now focuses on cotton pajamas printed in vintage-inspired images. For fall, the line also is including cotton pointelle and microfiber camisoles, low-rise pants and long-sleeved tops in argyle, Western, houndstooth and wallpaper floral prints.

The looks aren’t necessarily just for bedtime either, said Sills, who began shipping the line last November. “Women are wearing it with denim and getting more bang for their buck,” he explained. Wholesale prices range from $22 to $42.

In the junior category, heavy ornamentation is a key trend at the Madison Brands booth, first-time WWDMAGIC attendee and parent to the Ali & Kris and Madison & Co. labels. Ali & Kris is featuring tweed cropped jackets with colored charmeuse linings and jeweled buttons and crinkled charmeuse camisoles with beaded trims.

“We now sell to Charlotte Russe, but we’re pushing for department stores, the next step up, which is why we’re attending MAGIC,” said Les Parker, vice president of sales for the New York-based lines.

Dizzy Lizzy is another first-time attendee at the trade event on the juniors’ floor. It is focusing on Indian-inspired trends, including crinkled skirts, tie-dyed and ombré tops and longer tunics made of rayon georgette and cotton voile. Already in juniors’ stores such as Forever 21 and Charlotte Russe, the two-year-old line based in the Canoga Park community of L.A. also hopes to break into department stores with the help of WWDMAGIC.

“There’s a lot of traffic there, and we’re hoping to make some good connections,” said Alisa Lozovskaya, designer of the line. Wholesale prices range from $8 to $16.

Also making its debut in the junior category is T-shirt resource Article 1. The company, begun by Gianna Giannulli (sister to Mossimo) and her husband, Eddy Chavez, focuses on luxe plain Ts in 24 colors and a dozen bodies.

For buyers looking for alternative styles, the edge at MAGIC is featuring cheekier designs by brands such as Misconduct Clothing Co., a line of T-shirts, hoodies and hats featuring the Minnesota-based company’s logo. Wholesale prices run from $10 to $25.

Also premiering is Evil Kitty, a one-and-a-half-year-old Chicago-based line featuring clothes that appeal to the changing temperament of a shopper. There are sweet looks such as tutu skirts and bad-girl looks such as pencil skirts with latex appliqués and pink satin skirts covered in skulls. Wholesale prices range from $14 for a T-shirt to $75 for a dress.

“It’s for the girl who doesn’t want to be all girly all the time or all punk,” said owner and designer Lidia Wachowska.

She added that the company has never done a trade show in the U.S. However, she said, “we thought MAGIC was the best place to start.”