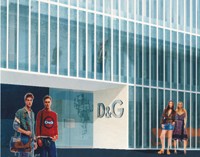 MILAN — The men’s D&G show here Wednes­day marked the beginning of a new era for the diffusion line.

The spring 2007 collection was the first entirely produced and distributed under the direction of Domenico Dolce and Stefano Gabbana.

Last year the designers ended their 12-year partnership with IT Holding for D&G and since then, Dolce & Gabbana has been preparing to take the brand in-house by building a $48 million D&G headquarters here, finding production partners and developing new key products and denim washes.

On Sunday, the new D&G building will open on Via Broggi, not far from the Metropol cinema, which the designers renovated last year and turned into a show space. The designers invested 38 million euros, or $47.9 million at current exchange rates, on the 54,000-square-foot structure for D&G’s showroom, commercial offices and press offices.

Designed by Studio +ARCH architects, the stark white building is comprised of two palazzos, one dating back to the Twenties — its original facade renovated — and the other from the Sixties. The rooftop sports a colorful restaurant for clients.

“We wanted to create a space that was immediately different from Dolce & Gabbana,” Domenico Dolce told WWD. “It’s linear but not minimalist — it’s very rich and very design.”

The structure is made of opaline glass and white marble from Namibia. Matte and shiny steel accent what Dolce dubbed the “white house,” while Ron Arad furniture, specially designed for the showroom, dresses the reception area. A standout Arad piece is a Swarovski crystal and fiber optic chandelier that can flash messages up and down its face.

“The point of the space is to really allow the clothes to be the protagonist,” Dolce added.

The showroom is the first public example of the breadth and depth of Dolce & Gabbana’s plans for D&G.

“Since it was a license we couldn’t do everything we wanted,” Gabbana said. “That’s no longer the case.”

Wasting no time, D&G will launch a men’s cruise collection for November and January deliveries. Men’s wear is an important revenue generator for D&G, comprising 43 percent of sales. Sales of the D&G line for spring and fall 2006 totaled 270 million euros, or $340 million at current exchange rates.

D&G is also focusing on denim and for spring is introducing six new styles and nine new washes. Each fit has its own name (Audacious, Power and Magic are just a few).

Finally, the pair is giving retailers a new merchandising classification of key items or, as Stefano Gabbana put it, “pieces that are the essence of D&G style,” for cruise. Women’s items include patent leather red pumps, velvet dresses and a vintage-inspired green coat in satin.

Product developments may already be in motion, but Gabbana said he and Dolce are in a period of assessing D&G and said he believed a natural cleansing of sales points would occur as well as a reevaluation of pricing.

“I have the feeling that [D&G] prices will fall,” Gabbana said. “Nothing is going to change style-wise. I am still in control of the design of [D&G] and I will still make the collection cool.”

Gabbana balked at the idea that D&G was a secondary line, but rather emphasized that it was a separate entity and a separate collection with its own spirit and style. He added that D&G would be managed by a completely different staff than Dolce & Gabbana and sold in its own showrooms worldwide. Showrooms planned for this year include Paris, London, Düsseldorf and Barcelona.

On the manufacturing front, Gabbana said the company doubled the size of its factory just outside of Milan and has earmarked an ample part of the 430,000-square-foot plant for D&G. Furthermore, he said the company hired a team to specifically scout sourcing partners outside of Italy.

“Before we took this business in our hands we concentrated on the manufacturing aspects of the brand,” said Cristiana Ruella, Dolce & Gabbana’s director of general affairs.

The majority of D&G will be produced in Eastern Europe.

Ruella talked in general terms about D&G’s strategy and its potential. Key points included anticipating trends with early, market-specific deliveries, working to find the best pricing in every category and reevaluating distribution. But Ruella alluded to major growth plans for D&G, which today counts 54 freestanding stores and shop-in-shops, 29 of which are directly owned.

“If we are able to realize all our qualitative objectives, the demand for volume will be very big,” Ruella said. “If we reach our goals, D&G will have huge volume and huge sales numbers, but before we can talk about [specific] numbers we want to live through a season.”