Artists, 95 galleries and their patrons converged here for the Dallas Art Fair held at Fashion Industry Gallery plus a string of art-related galas and parties that also attracted designers. 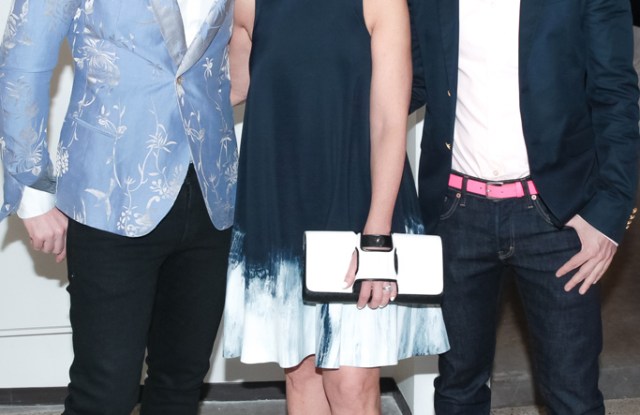 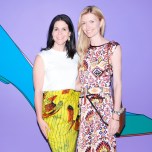 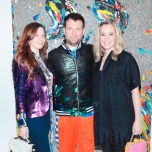 DALLAS — Artists, 95 galleries and their patrons converged here for the Dallas Art Fair held at Fashion Industry Gallery plus a string of art-related galas and parties that also attracted designers.

“I’m very surprised and delighted by what’s going on in Dallas with the arts scene,” commented Lisa Perry. “It’s very cool, very interesting. There was a great vibe, great energy last night at the Art Fair.”

Perry, who spent a day meeting customers at Forty Five Ten, donated a dress to the Art Ball benefiting the Dallas Museum of Art, and store president Brian Bolke coordinated her five-day visit to coincide with the third annual Dallas Arts Week.

“We got a schedule a couple weeks ago [from Bolke] and it was like, whoa, a five-page schedule,” said Perry, who began selling to Forty Five Ten this season. “After two weeks of packing for every event, here we are.”

Some visitors, including nine New York editors and reporters on a press junket organized by Nadine Johnson, also toured private collections of city art pillars Cindy and Howard Rachofsky, Amy and Vernon Faulconer, Deedie and Rusty Rose, and Marguerite Hoffman. There were also lectures and performances at various institutions.

In addition, the Rachofskys hosted a luncheon and mini shop for Perry at their Richard Meier-designed home, where 20 guests snapped up about 40 pieces, according to Bolke.

It was the first year that all these happenings were packed into one week, but what seemed like a potential bonanza for fashion retailers didn’t necessarily work out that way.

“I think in the end it was way too much at one time, and hopefully next year some of these events shift to the week before or after,” Bolke reflected. “Because no one could do everything, I think they chose to go to less events, then ironically bought less.  If they were spread out, I think people would have bought more new outfits overall.”

At Stanley Korshak, owner Crawford Brock got a “few customers” from all the hoopla but said “it’s hard to tell” because the store’s main entry is blocked by construction of an esplanade.

However, Elements boutique enjoyed a nice boost from Arts Week, according to manager Stevie Moore.

Moore said the store saw “a lot of new customers that are typically department store shoppers coming in looking for something more unique to wear. We also saw a lot of regular customers feeling a little more adventurous stylistically so we were able to introduce them to some new looks and designers.”

Johnson Hartig was happily surprised that his first trunk show at Neiman Marcus’ flagship coincided with the festivities. The designer hauled 30 trunks of fanciful Libertine frocks, coats and cashmere sweaters to the downtown store, offering spring and fall goods for sale off the rack instead of to order.

“It’s the most perfect accident because our clothes are collected by a lot of major art collectors,” Hartig said. “It all came about because of the success we’ve had at Bergdorf Goodman with our trunk shows…We take over an entire section and we do like $400,000.”

“The growth of the Dallas Art Fair alone – from 35 art dealers seven years ago to 95 this year – is an indication of how the cultural life of the city of Dallas is thriving,” observed Jim Gold, president and chief merchandising officer of Neiman Marcus Group. “Not too many years back, the idea of creating a nationally recognized Dallas Art Week would have been considered highly unlikely. It is very exciting to see Dallas’ museums, cultural institutions and businesses unite to offer such a rich experience and draw national interest in our art scene.”

VBH designer Bruce Hoeksema, who flew in from Paris for his goddaughter’s christening, attended some Arts Week parties.

“Is it always like this?” he asked. “Whenever I’m here it seems like there are 3 million things going on.”

Visiting Stanley Korshak, which displays a wall of his handbags, Hoeksema noted that early this year he closed his big New York flagship on Madison Avenue at 72nd St. and established a 750-square-foot boutique within the Four Seasons Hotel.

“I feel like we were missing the new Chinese clientele, the Russians and people who don’t make it that far up Madison when they are shopping,” he explained. “We wanted to be more in the center where the action is. You cannot come into the hotel without seeing it. Nowadays we have to make it easier for people to access the brand, and that is a perfect venue because it’s a hotel full of our clientele.”

Also appearing at Korshak was Maria Cornejo, who was intrigued by the arts action.

“It’s just a coincidence, but if we do [a trunk show] again we’ll make sure it overlaps because I would love to stay for the Art Fair,” Cornejo said. “There’s a lot going on this week. It’s funny because a lot of our clients are artists and gallerists.”

Monique Péan and her husband, Stephen Glass, were feted earlier in the week with a party and jewelry sale at the home of Katherine Perot Reeves and an appearance at Ylang 23.

“I just had the privilege of seeing The Warehouse [private art gallery], which is incredible,” Péan said. “It rivals many of the collections I’ve seen in New York.”

John Sughrue, co-owner of the Dallas Art Fair and FIG, was pleased with the momentum.

“The highlight of the week for me was our Deutsche VIP collector luncheon prior to our gala where we anticipated 300 guests and the actual number of attendees exceeded 600,” he said. “At that moment, I knew the Dallas Arts Week was going to blow the roof off the house.”