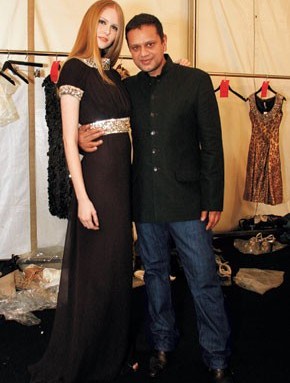 There are plans to expand the event for fall, and again in 2009.

Ken Downing, senior vice president and fashion director of Neiman Marcus, agreed with her. “There are people all over the mall, and our store is packed,” he said.

The event will grow in the fall, with nine days of shows starting Oct. 15 and more elaborate sets and productions, said Chris Szalay, NorthPark marketing director. There will be additional displays in the lounge area of the tent, where a new shoe and handbag exhibit last week proved effective at driving business. The fall round will include fine jewelry and a space for fast fashion.

More expansion is in the works for next year, when Szalay plans to stage additional shows in the mall.

“We will incorporate more events inside the center with multiple runways that can showcase other retail groups that probably won’t make it onto the runway at Fashion at the Park,” she said.

Fashion at the Park opened Wednesday night with Doonan walking the length of the runway in platform Lanvin sandals — to prove a point. “Every day my in-box is full of women complaining about high shoes….But if I can wear them, so can you,” he quipped.

The event culminated Saturday night with a gala dinner and runway show featuring evening­wear by designer Naeem Khan. It benefited the AFI Dallas 2008 International Film Festival — and attracted the likes of Barton.

The 15 shows, sponsored by Cadillac, cost more than $2 million to produce, Szalay said. A total of about 7,600 tickets were sold, with prices ranging from $15 for Nordstrom’s cosmetics show to $300 for an invitation-only Neiman Marcus dinner that benefits charities.

The lounge area of the tent opened an hour before each show, beckoning ticket holders for Champagne and martinis as they chatted, checked out displays or had touch-ups by Bobbi Brown, whose team did makeup for all the shows.