Stella McCartney used to watch "Dallas" on television, but nothing prepared the designer for the Texas-size welcome she got here -- complete with cheerleaders and a marching band. 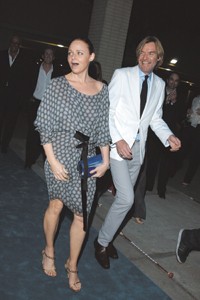 DALLAS — Stella McCartney used to watch “Dallas” on television, but nothing prepared the designer for the Texas-size welcome she got here — complete with cheerleaders and a marching band.

Arriving at NorthPark Center mall on Wednesday night to inaugurate her collection at the Neiman Marcus anchor, McCartney appeared stunned by the sights and sounds of the band, cheerleaders, twirlers and drill team of Dallas’ David W. Carter High School, which is best known for its championship football.

As the cheering squad shouted, “Let’s go, Stella, let’s go,” and took turns performing toe-touch leaps, hundreds of guests had gathered in the court in front of Neiman’s.

The retailer played up the Texas theme with male models clad only in cowboy hats, swimsuits and work boots shimmying in the fountain. Cocktail waitresses included Natalie Woodley, a diner cashier who is always decked out in a towering black beehive, sparkling eyeglasses and layers of bold fashion jewelry. The only thing missing was barbecue, eliminated in favor of veggie burgers and empanadas in deference to McCartney’s vegan diet.

McCartney’s collection has been selling well and “knowing that she was going to be here, everyone wanted to have a piece for the party,” said Malcolm Ruben, Neiman’s vice president and general manager.

On Thursday, McCartney met with Neiman’s staff, customers and media at the store. The quick trip transformed her perception of the city, which she visited briefly in 1989 on tour with her father, Paul McCartney.

“I watched ‘Dallas’ as a young kid, so you have this impression, but it’s totally not that anymore,” she said. “The women were surprisingly chic. It’s way more stylish and understated than you’re led to believe. Everyone is very warm and welcoming, and the Neiman’s store is kind of cool.”

McCartney said she especially appreciated the opportunity to articulate her vision of the brand to the staff.

“I believe in accessories, and they’re all nonleather, they are ready to teach that to their clients,” she said. “It’s a new way of looking at things, so it was really encouraging for me to see that.”

This story first appeared in the May 5, 2006 issue of WWD. Subscribe Today.