The adage that every little girl would like to grow up to become either a princess or ballerina (or, ideally, both) may no longer hold true. 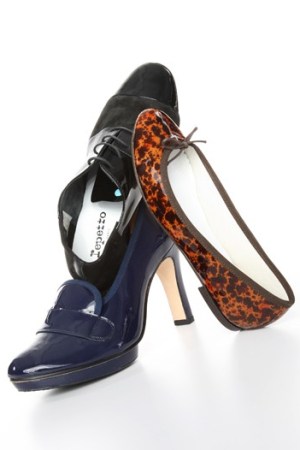 The adage that every little girl would like to grow up to become either a princess or ballerina (or, ideally, both) may no longer hold true in these Miley Cyrus-centric times, but Michael Flanagan is hoping otherwise. Flanagan, a former investment banker, is the first North American director of Repetto, the Paris-based dancewear and shoe company. Charged with opening Repetto’s New York showroom for the spring 2009 season, Flanagan had one priority. “Build demand,” he says. Translation? Get grown-up women back to the ballet shoe brand they chasséd in as little girls.

While fashion trends are in Flanagan’s favor — thank you, Lanvin — name recognition is not. Repetto was founded in 1947 by French cobbler Rose Repetto. The story goes that she crafted a pair of pointe shoes for her ballet star son Roland Petit; 10 years later, she whipped up ballerina flats. Though the company has long been recognized in Europe as a venerable producer of both professional dance shoes and, in recent years, everyday ones (the chic ballet slipper and currently au courant jazz shoe are bestsellers), Repetto’s identity in the U.S. is less defined. For one thing, there’s the price: about $94 at wholesale for a perforated leather ballerina shoe (a style immortalized by Brigitte Bardot), while a high-heeled shoe wholesales for about $140. Then there’s availability: Until this spring, Repetto shoes could be purchased online or at a handful of small boutiques and in limited quantities at stores like Bergdorf Goodman. Flanagan has set out to change that, ramping up sales directly through the showroom and increasing the brand’s retail presence to more than 80 locations across the country, including Kirna Zabête, Alan Bilzerian and Fred Segal. While the privately owned firm will not release sales figures, Flanagan says sales for the U.S. spring 2009 season have been higher than all of 2008.

“Before, you occasionally saw [Repetto] at a trade show, and you might know the name from the dance world, but otherwise we’ve been an in-the-know brand,” says Flanagan, who has installed his three-person team in an airy showroom in SoHo formerly inhabited by Yohji Yamamoto (one of the several high-profile designers, including Karl Lagerfeld, with whom the company has collaborated on runway shoes). “But our goal is not just to be more visible. We want to build relationships with buyers, remind women that the essence of Repetto is about dance. You don’t have to be a dancer to wear our shoes, but that history is integral to [the company] succeeding.”

To that end, Flanagan has been establishing relationships with dance schools and companies, inviting instructors, students and professional dancers to visit the New York showroom, as well as offering in-store tutorials on how the shoes are crafted: For both the street shoes and dance shoes, the stitching is done on the reverse side and the shoe is then turned outside in; the leather sole is beveled, so that it is strong and sturdy, and each piece is finished by hand in the company’s workshop in the Dordogne region of France. Educating sales staff on the unique production process, Flanagan explains, helps them articulate why the company’s price points are higher than, say, London Sole or J. Crew’s. “There are cheaper brands out there, but whether the economy is up or down, we continue to make our shoes the same way,” says Flanagan.

And with street shoes accounting for 65 percent of the company’s U.S. sales, inventive design — such as the tortoiseshell pattern and loafer silhouette the company sent forth for fall — is a priority, as is the bridge line of activewear the company launched in the U.S. for spring. Consisting of loose tanks, cotton pants and hoodies, the clothing collection has done well in warm weather markets, according to Flanagan. Add to the mix the limited leather bag line already in stores, and it seems the only thing missing from Repetto’s American entrée is a glossy print campaign, which the company has long bankrolled in France. Prima ballerina billboards are not yet on the horizon, however.

“We’ve just entered the market, so advertising isn’t our focus,” says Flanagan. “These days you have to support your retailers. One thing at a time.”