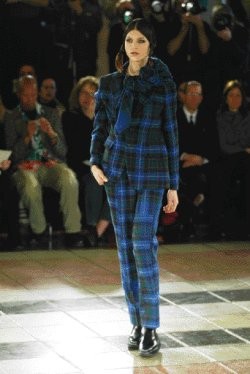 Comme des Garçons: Not everyone believes a troubled world can seek solace in joie de mode. Certainly not Rei Kawakubo. In her fall collection for Commes des Garçons, Kawakubo envisioned a lonely warrior, a girl who moves about ever-ready to evacuate, all of her earthly possessions in tow. She carries them wrapped up in a bulbous fabric parcel slung on her hip or back.

Of course, woebegone is no excuse for looking undone, and this is a quite pulled-together, if mournful, miss. So much so that she bothers to match her hobo pouches to her outfit, whether plaid or olive drab.

Accent on the drab. We all know that life is not just a bowl of cherries, but you expect fashion to provide just a small maraschino on top. Kawakubo, however, is clearly in no mood for laughs, and as a result her girls assumed the trappings of a relentless sobriety.

Still, that sobriety was beautifully rendered. Kawakubo loves a plaid, and here used it in weighty, mannish suits. Conversely, black suits took on a certain chic under the luster of multiple gold chains, and a more overt political bent when printed with deep thoughts. But even when cut for sensible ease, tailoring is not necessarily the best choice for the girl on the go to nowhere in particular. For comfort, she can slip into a long black tunic, slit this way or that to reveal a white cotton underskirt, all bunched up into that hip parcel. Or she can go for a take on army fatigues loosened up and slung on a drawstring.

Kawakubo retreated from casual mode to close the show with a caped crusader, her cloak spliced in back with a giant cross, as if in non-specific warning. But then, the designer has long been one of fashion’s most daring and intelligent crusaders, and if her message was a tad depressing, she’s still worth listening to.

Lagerfeld Gallery: Karl Lagerfeld loves — and wears — what Hedi Slimane does for Dior Homme, so it’s no surprise that he reinterpreted a signature Slimane look — a white shirt and super-skinny black tie — for Lagerfeld Gallery, showing those gentlemanly basics under cut-away knits, jackets and dresses. But while Lagerfeld tinkered with men’s wear, his fall look is strict, yet feminine.

For the modern-day lady boss, there were sharply tailored jackets and kicky pleated miniskirts, a white fur with shaved-in stripes and a coat with darted seams that ran straight as an arrow. When she’s off the clock, the Gallery girl has plenty of options. Out came sparkling silver knits, including a chunky turtleneck and off-the- shoulder version, and tailcoats worn with slim satin pants that picked up on the men’s wear motif.

Though the collection was full of grown-up everyday clothes, distinctive techno touches kept it all from seeming basic. It was all fine, and some of it was even dandy. What the collection lacked, however, was the razor- sharp message it usually delivers.

Chloé: During a preview of her fall collection, Phoebe Philo let rip with the references, promising sexiness à la Helmut Newton, rocker chic thanks to Robert Plant, Anita Pallenberg’s attitude and the boudoir provocation of Carlo Mollino’s photographs of hookers in the Sixties. Tall order. But what could have been a risky proposition actually paid off. Philo’s fall Chloé collection delivered all of the above, which is to say it was eclectic and then some. Just like the quintessential Chloé girl, a complex character who needs a wardrobe to match, Philo found no need to rein herself in when adventure — and playful fashion — beckoned.

The Chloé cocktail calls for sharp tailoring, a splash of body-baring raciness and two parts romance, but Philo spiked each look to keep it a little different from the last. Sleek iridescent feathers came into play throughout, as did a Sixties/Seventies steaminess Philo alluded to with her iconic list. The bulk of the collection, which ranged far and wide, included a jade leather motorcycle jacket with lace patched jeans, a peachy pink strapless dress made of stacked ruffles, a black lace top with a two-tiered mini-culotte skirt and a gold-coin Barbarella dress. And, for the most part, it worked. Sometimes it’s better not to ask why.

Costume National: If Ennio Capasa got a penny for every trend that he hit on in a season, his piggy bank would surely be full by now. Romantic, silver, short, ethnic — been there, done that. So it came as no surprise that, for fall, Capasa banked on the aggressive sexiness that swept through Milan. Strict, severe and authoritative —with a nod to this season’s unsung inspiration, Azzedine Alaïa — was the prevailing attitude, as girl after girl sauntered out in every conceivable idea of tough chic: Black cutaway jackets with high-collars and corsetted belting; zipped-front motorcycle jackets layered over unforgiving leggings and body-hugging turtlenecks; leather swing peplum coats pulled in tightly at the waist; funnel-neck mini-coats in Sixties damask patterns, and, for the truly dangerous, a stretch-leather catsuit, complete with leather gloves and thigh-high boots. And yes, everything was black, black and black with — oh, yeah — the odd shot of Barbie pink.

Hussein Chalayan: Like eating sushi, playing board games or you-know-what, you have to be in the mood for a Hussein Chalayan show. That’s because, no matter how much his clothes have to say on their own, no matter how stimulating the ideas behind his very, very conceptual work, there’s always another intellectual hurdle to leap come showtime. Sometimes the effort pays off — remember the charming furniture that converted into a fashion collection? At other times, no matter how great the clothes, his shows are flat-out annoying — remember the girl dressed in an ethnic costume standing stock-still on the runway for what seemed like hours?

All the pent-up notions he presents at once makes you think he should get out more. In any case, this season it was too much information, all right. A walnut-encased trampoline, a walnut confessional cabinet and a walnut boat-coffin kind of thing took up most of the stage, while overhead, a digital clock ran numbers and a ticker delivered a message about sins and planting seeds and confessing. Or something. If you were in the mood, you’d get a kick out of the first model out who posed, two big helium balloons connected to her black minidress, for what seemed like hours before she bounced. Others performed less-intelligible acts.

And it all served to distract from clothes that would have stood well on their own: Sweaters and jackets drastically reduced by gaping holes with their edges traced in silver zippers, a black top with silver zippers arced across the front like tracer fire, and the garter-garnished miniskirts and sleek leggings Chalayan worked throughout.

For the finale, he managed to merge his avant-garde showmanship with adorable merch as models, dressed in spliced army twill and plaid minidresses, giggled as they reached for their rip-cords and pouf — the flaps of their dresses instantly inflated like pool floaties. What does it all mean? Who knows — and who cares? It doesn’t need to be deep. It was — sorry, Hussein — fun.