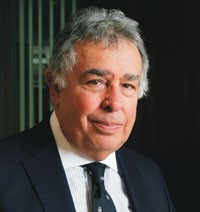 NEW YORK — Daniel Cremieux came here from his hometown of Paris earlier this month with a clear vision.

“I need to see and understand how the market works here,” said the president and chief executive officer of the 30-year-old firm that bears his name. “From the deliveries to the way people shop, it’s all very different than it is in Europe.”

Cremieux needs to understand U.S. customers for a good reason. His firm, which has only produced men’s wear since its launch and has only sold Dillard’s exclusively in the U.S., will launch a women’s line for spring 2007 selling. With the women’s line, Cremieux said the company is planning for significant expansion in the U.S., which will include more products carrying the Daniel Cremieux brand name (accessories and home are two opportunities on the horizon) and some freestanding stores. Already in the works is the company’s first U.S.-based freestanding store here.

“I’m very interested in Bleecker Street and Madison Avenue, we just have to figure out the best location for us,” he said. “But it will be open within a year. That is the goal.”

It seems like a reasonable goal. Seven years ago, Cremieux set up his U.S.-based company, called Cropton Design, and hired Martin Miller, president of the Terbell Group here, as a business consultant. Under Miller, the company worked out a long-term exclusive deal with Dillard’s to carry the men’s line in its 315 stores. The line, Miller said, continues to perform well and Dillard’s now displays it in Cremieux shop-in-shops, which includes the men’s sportswear, suits and premium jeans as well as a home line.

The women’s line, Cremieux said, will reflect the same attitude as the men’s, with a sexier edge.

To design it, Cremieux has hired his son, Stephan, to lead a team of five designers.

“We hired a new group of designers to work on the women’s line, so they can focus on just that,” he said. “They are all young, between the ages of 22 and 28, which is about the age of the customers we are targeting.”

The line will include cashmere sweaters, premium denim jeans, cotton T-shirts, blazers, pants and skirts. Although wholesale prices have yet to be set, Cremieux said the line will be priced the same way as the men’s, from $45 to $500. He expects to reach somewhere between $6 million and $10 million in sales volume within the first year of the launch of the women’s line. This will add to the company’s already $250 million global sales volume.

While Cremieux said he would love to see the women’s line in many U.S. stores, he said his Japanese-based customers have been asking for a women’s line for years and he sees them launching the line there first.

“We are very focused on Japan where we do very good business,” he said. “We are one of the oldest brands being sold there and have consistently seen our sales go up there every year. We also produce a very large amount of product for Europe, about six million pieces per year.”

Internationally, the Cremieux brand already has massive presence, with 25 freestanding stores located across the globe and a department store presence in China, Japan, France, Belgium, Italy, Spain, Portugal and the Middle East. The company will also open freestanding stores in Paris, Beijing and in Shanghai in April.