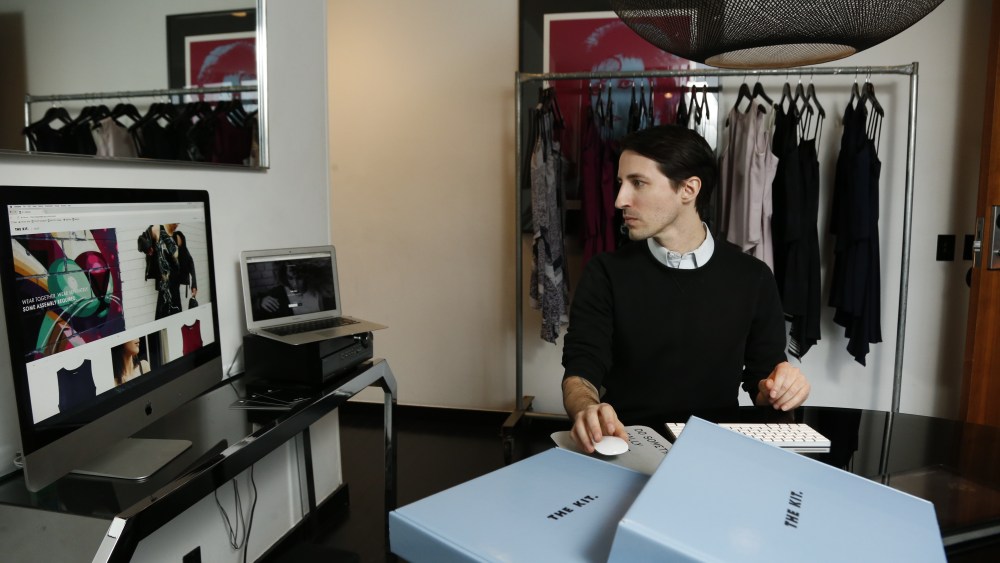 During a preview of Daniel Vosovic’s new venture, The Kit, the designer does not bring up the fact that he was a finalist on season two of Project Runway. That was 11 years ago. “It was a moment, but if I’m still using that as an entry to an interview or a talking point, then I can’t consider myself a great designer,” said Vosovic, when asked about the show.

Whether he considers himself a great designer, he clearly sees himself as one who has been beaten up by a fashion system with odds stacked impossibly against small, independent operations, such as the contemporary label he ran for six years before shuttering it in 2014. “During my last year, I was suing three stores for tens of thousands of dollars that owed me money; I had changed showrooms five times over the course of six years because ‘the collection just wasn’t right for the market;’ I’d have to tweak price point or change my message — the messaging! It’s tomboy-chic, girl-on-the-go,” said Vosovic, venting his biggest frustrations. “A friend of mine was secret shopping a store in Chicago and my stuff was being shown with a cowboy hat and a gauzy scarf. That was a customer’s first interaction to the designs I had spent thousands of dollars developing.…I thought, ‘I’m screaming in an empty room. I’m not reaching anyone.’”

What does a designer need to reach his girl-on-the-go?

The obvious answers are concept and money. The Kit is a collection of printed stretch silk georgette pieces that are sold as a package (thus the name) but can be worn as separates. It’s funding comes from Resonance Companies, which specializes in emerging fashion labels, and was founded in 2015 by Lawrence Lenihan, a venture capitalist who founded FirstMark Capital, and Joe Ferrara, who has investing and manufacturing experience. Vosovic met Ferrara while he was part of the CFDA Fashion Incubator program.

Resonance’s web site (resonance.nyc) is a blank white page bearing only what appears to be the company’s tagline: “Do Something Really F-cking Big.” The big thing Resonance is doing for Vosovic and The Kit is putting it on a vertical production cycle that requires only a two-week lead time. The Kit will launch Feb. 1 on a direct-to-consumer model through its own web site with two kits — the Emma, and the Charlie, each featuring a simple printed silk top and a relatively simple matching dress, one short, one longer — in a range of original prints for $395. Two weeks later, 10 new kits will hit the site, with ten more the following two weeks and so on. Vosovic wanted to start with a very simple, easy-to-digest message, which is why he chose two fluid dresses with asymmetric hems and matching tops. He said the Kit concept, which is meant to create convenience and solve wardrobe problems for customers will evolve to include jumpsuits, maxi dresses, dresses with long sleeves, a kit for the beach, a kit for work, etc.

“I roll my eyes at see-now-buy-now,” said Vosovic, before voicing another tag line coming out of Resonance: “This is design-now-buy-now.”

“Forget about see-now-buy-now, that’s just a trick,” said Lenihan, whose investments under FirstMark included Tommy John and LollyWollyDoodle. Resonance does what he calls “full stack” manufacturing. Otherwise known as vertical manufacturing. “It’s raw materials to customer doorstep,” said Lenihan. “Things are moving faster and faster. How can we make something that functions like Zara but that’s not cheap s–t?” There are a few things that enable such speed to market. Owning a factory helps. Ferrara happened to have one in the Dominican Republic that needed some updates and new equipment, such as MS printing machines, but was otherwise ready to go for The Kit. Vosovic adjusted his design process. He uses CAD software and uploads his patterns into a digital library, scaling each pattern from size two to 12, and printing only the fabric being cut for patterns. He also no longer designs “collections,” but items. Collections are considered old hat at Resonance, which has brought two other brands to market under its quick-turn vertical operation, Tucker and JCRT, the plaid shirt line by the former designers of Costello Tagliapietra.

Vosovic said that he is no longer held to minimums. Theoretically, The Kit’s minimun for any style is one, although the launch delivery is already bought and produced. “He’s free of the constraints of minimums, of time and cash flow,” said Lenihan. “When you’re taking big inventory positions every season, a single collection can bankrupt a small designer.” The two-week lead time will allow Vosovic to be more reactive. If something’s not selling drop it; if a major trend comes along, get on it.

“I keep going back to Beyoncé in that yellow dress when she launched that [Lemonade] video and smashed those cars,” he said. “Everyone wanted a yellow dress at that moment. I have the ability to say, what is The Kit version? I can get up and running in a week.”