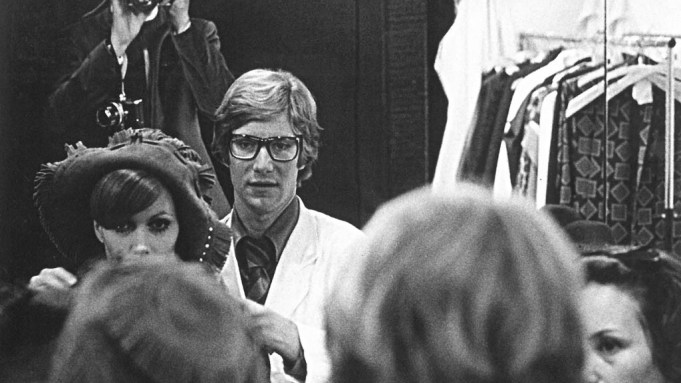 Later this year, Danielle Luquet de Saint Germain — a friend, model and muse to the late Yves Saint Laurent — will part ways with more than 10,000 pieces by the likes of Azzedine Alaïa, Paco Rabanne, Christian Lacroix and, of course, YSL. Be it lack of space or the desire to share a piece of cultural heritage with the outside world, Luquet’s motives in disposing of the totality of her impressive wardrobe are not clear. Regardless of motive, the October auction in Paris means that a collection billed as one of the world’s most significant private holdings of couture will go under the hammer.

The former model retreated to a discreet life in Geneva years ago, though fellow model Colette, who walked for YSL, Dior and Hermès, and who has remained friends with Luquet, assured WWD that, “Danielle hasn’t changed. She could still fit in all of those dresses.”

The collection will be auctioned off in about three rounds, according to Gros & Delettrez, the first of which will take place Oct. 14, preceded by an exhibition from Oct. 2 to Oct. 5 and again on Oct. 12.

Luquet’s androgynous physique — a petite size 34 — is precisely what attracted Saint Laurent in the Sixties.

“One morning I arrived at the same time as Yves, dressed in a pair of pants and a men’s trench,” Luquet recalled in an interview she gave on the occasion of a retrospective dedicated to her collection at the Museum of Geneva in 2001. “After the presentation, he asked me if I could leave him my clothes for inspiration.”

The couturier’s admiration for his muse is well documented. In a 1969 interview, Saint Laurent divulged: “I’ve been systematically looking for girls who resemble the girl of the moment. [Danielle] came from Lyon, she had done very little fashion, but I realized that her body, her gestures were typical of the woman of today. I had nothing to teach her. On the contrary, it was she who helped me get rid of all outdated references. Everything I did on her — because I always work on a model, never flat — and everything that came tumbling down, was for the better. She made me advance.”

“She wore them with allure,” said Colette. “When she walked into a restaurant, all eyes were on her. The times were different then. We were allowed to keep one haute couture dress per season. Models were the stars, and the designers had very strict policies.”

Coco Chanel’s were the most draconian, Colette recalled: “A Chanel contract forbade [us] from wearing jeans in the evenings. Mademoiselle Chanel had her eyes everywhere. She knew exactly who had not played by her rules the night before.”

Luquet, exclusively with the house of YSL, faced a different problem.

“The summer Saint Laurent created the tuxedo, I borrowed it for an evening to wear at the Casino of Deauville,” the model once recalled. “But I was refused entry.” (Interestingly, it was only last February that the law forbidding women from wearing trousers in France was officially repealed, 214 years after it was originally passed.)

Luquet’s collection, which she has kept in museumlike conditions on the upper floor of her home in Geneva, also includes prototypes by Claude Montana, such as an extravagant ensemble made from thick black velour worthy of a 20th-century Genghis Khan, featuring embroidered bird and floral motifs. There are Lesage embroidered pieces, copious couture jewelry and artistic headgear, one of which was crafted from sheaves of wheat to match a golden kaftan designed by Thierry Mugler in 1978.

“She had a strong eye, she did not pick any pieces that were banal,” said Françoise Sternbach, a member of the French Union of Professional Art Experts who helped put the auction together. “I know everyone will focus on the YSL pieces, which are magnificent, but I tell you there are dresses here by Claude Montana which would not have existed without her. They are one-offs, prototypes designed especially for her.”

Sternbach said the collection was clearly the result of a lifelong passion: “This is not the work of a random person, but that of a lover of fashion. What we see here is one of the most significant private collections of haute couture in the world.”