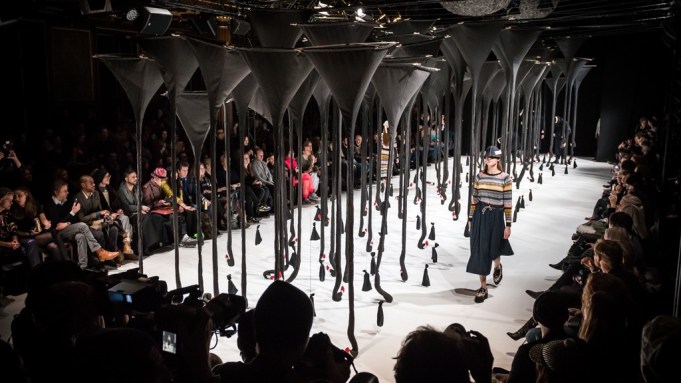 COPENHAGEN — Despite the tough economic climate, the atmosphere was upbeat at Copenhagen Fashion Week, which ran from Jan. 30 through Feb. 3.

To better face business challenges, the Danish fashion industry is consolidating and looking beyond Europe, especially to China. Also, it is joining forces with its Nordic neighbors, multiplying initiatives to raise awareness beyond Scandinavia.

The event took place with a backdrop of unsettling statistics. Revenues for Denmark’s fashion industry fell 3.7 percent in 2012, as export numbers dropped 3.3 percent, according to Dansk Fashion and Textile, the trade association for Danish textile and clothing companies. The industry registered sales of 38.6 billion Danish kroner, or $6.83 billion at average exchange rates, in 2012, of which exports amounted to 22.7 billion Danish kroner, or $4 billion.

While Danish fashion is doing well in neighboring markets — exports to Sweden and Norway have risen 8.7 and 7.3 percent, respectively — shipments to Spain and Italy have fallen as much as 30 percent.

However, “companies have to manage to do well in their home markets before they go to Asia,” he warned.

Hillmose highlighted the number of acquisitions, with the biggest example being DK Co.’s purchase of divisions from BTX Group, making it the third-largest Danish fashion player.

“Big companies are getting bigger,” he said. “They are streamlining their portfolio of brands.”

Hillmose predicted that in 2013 Danish consumers will have more money to spend, and, if the world economy permits, domestic consumption and revenue will slowly turn around.

Among the 41 women’s and men’s wear labels on the schedule were rising talents such as Freya Dalsjø and regulars such as Bruuns Bazaar and Henrik Vibskov.

Bruuns Bazaar took advantage of fashion week to open a joint flagship with Baum und Pferdgarten, a brand that the group bought, located a stone’s throw from the new Marc Jacobs boutique and the Wood Wood and Storm concept stores.

Overall, Gallery reported 12,684 visitors, up 10 percent from February 2012. The Vision show declined to disclose visitor numbers as it said the two fairs have been merged and it is a new concept. It acknowledged that there has been no increase, however.

CIFF organizers said visitor numbers were up 12 percent compared with last February, with those from Sweden and Norway showing the greatest increases.

Continuing on its major rebranding last season, CIFF featured a Crystal Hall, showcasing a mix of avant-garde Scandinavian and Paris-based brands such as Melinda Gloss, Damir Doma and Ami.

Buyers were upbeat about the region’s fashion offer.

“You do get good quality and good price from Scandinavian brands,” said Jake Bancroft, a buyer for U.K.-based e-tailer Coggles. “Peter Jensen for men’s wear is great. We stock Wood Wood for men’s wear. Hopefully, we will start stocking their women’s wear as well. Their floral prints for spring are sensational.”

En route to the Soulland show, Colette’s Sarah Andelman said she would partner with Soulland designer Silas Adler in April.

“He has done a collection inspired by Babar the Elephant that we will carry,” Andelman said. “Colette’s water bar will be transformed into a ‘water-babar’ for the occasion.”

It was the Paris retailer’s first time at Copenhagen Fashion Week, and Andelman said she had found a sneaker brand, Eytys, and some jewelry.

Katarina Nordström from the specialty store QC Corner in Göteborg, Sweden, which carries McQ by Alexander McQueen and Galliano by John Galliano, said Copenhagen Fashion Week is a good way to get know what is going on in Scandinavia.

“We see a lot of sweaters and jumpers,” Camart said. “In terms of colors, we are continuing on the same palette as spring-summer 2013. We see a lot of yellow and electric blue.”

As the department store has plans to revamp its designer floor — set to open at the end of September — to showcase more international labels, she said Scandinavian labels could well be represented.

Matteo Fontanelli, a buyer for Florence-based store Luisa Via Roma, which sells Swedish label Uniforms for the Dedicated, said, “Knitwear is big, both in Scandinavia and Japan.”

A flurry of initiatives to promote Scandinavian fashion are also in place. Gallery, for instance, will collaborate with the Finnish Export Ministry and host four shows of Finnish designers. Before that, Scandinavia’s largest-ever fashion exhibition is coming to Somerset House in London, opening on Friday, the first day of London Fashion Week.