COPENHAGEN — With its striking opera house on the harbor and a glamorous crown princess from Australia energizing the social scene, this city on the Baltic, often equated with a cute Little Mermaid, is experiencing a cultural and creative... 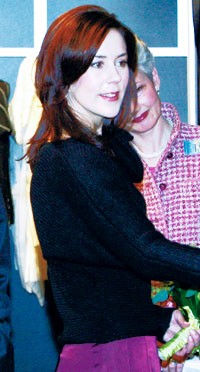 COPENHAGEN — With its striking opera house on the harbor and a glamorous crown princess from Australia energizing the social scene, this city on the Baltic, often equated with a cute Little Mermaid, is experiencing a cultural and creative frisson.

Elvis Costello has been commissioned to compose his first opera, to be premiered in Copenhagen this fall. Chef Rene Redzepi, 28, formerly of El Bulli in Spain — often called the world’s best restaurant — is pioneering one of Europe’s most daring cuisines, using all Scandinavian products, at his recently opened Noma. And Plot, a young architectural firm that was honored last year at the Venice Biennale, is commanding serious attention.

Now the city wants to make a mark on the fashion world. And though it might take a while before it rivals Milan, Paris or even London, Copenhagen showcased its best talent Feb. 10-13 during its own “fashion week,” complete with midnight runway shows, scores of groovy parties and a hip trade fair.

Logistics didn’t always go as planned. A huge snowstorm pummeled the city, closing the airport, keeping people indoors, and at one show a horse with a model sidesaddle, stopped, and, well, left its smelly calling card.

None of it fazed Princess Mary, who last year wed the country’s crown prince, Frederik. She cracked up laughing at the equestrian incident.

With a pack of paparazzi in tow, the princess attended shows and toured the aisles of the CPH Vision trade event, which assembles some 300 European fashion and sportswear brands and attracts thousands of buyers from across northern Europe.

The princess has taken it upon herself to become the guardian angel to Denmark’s fledgling fashion industry. And they couldn’t have found a better cheerleader with her striking looks and a style sense some say is unrivaled in royal circles since Britain’s Princess Diana.

And though Copenhagen fashion week has been around for several years, under Princess Mary’s watchful gaze, Denmark fashion just may be coming into its own.

“It’s an electrifying moment for us,” said designer Ann Wiberg, who besides her signature line, which is based in Copenhagen, co-designs the Paris-based Trash Couture collection. “Danish people are very aware of fashion right now.”

Since the days of Arne Jacobsen, when the innovative architect brought a feeling of functionalism to Danish design, the country’s aesthetic direction has been typecast as pared down and linear. Indeed, architect Henning Larsen’s design for the opera, though controversial, has an unfussy look using rich materials. It has an overlapping roof, a massive glass walled foyer and a bubble front.

But Danish fashion of the moment isn’t minimal and clean. Judging from the girls dancing in clubs like Rust or Konrad in low jeans, vertiginous heels and tight, colorful and barely there tops, the vibe is more like Ibiza — if you close your eyes and forget the snow.

Meanwhile, ethnic flourishes, rich embroidery, tweeds and even hard-core clubwear were the most pronounced trends on the runway here.

“What I’m trying to find is a new luxury for a youthful generation,” explained Bjorn Bruun, designer for Bruuns Bazaar, the fashion house he and his brother founded 10 years ago.

Bruun, head of a company that employs 100 people, is one of the leading designers in Copenhagen. He said he expects to increase sales by 30 percent for the fall season. He will open four stores this year, including units in Stockholm, Oslo and Copenhagen.

“It’s really quite a moment for us right now,” he said, adding that the fashion week in Copenhagen is important for his business, since it drums up a crowd of buyers from across Scandinavia, which he called a “brilliant” market for the brand.

Yet Bruun is representative of the challenges Danish designers face as they try to grow internationally. When he began, Bruun based his house out of Paris, opening a boutique and staging runway shows while attempting to pierce the U.S. market. But after a few tough seasons, he was forced to shutter his Paris operation, put plans for growth in the U.S. on the back burner, and move back to Denmark.

He said it strengthened his business. “It’s much easier to work out of Copenhagen,” said Bruun. “We can stay clean and organized. It works for us. And then, I think we in Denmark are closer to the English fashion scene than any other.”

Indeed, a trio of Danish designers — Peter Jensen, Camilla Staerk and Jens Laugesen — who are based in London and vying for recognition there, brought their wares back home for the fashion week, presenting them to the press at a champagne party in an apartment within view of the royal Amalienborg Palace.

“Are my designs typically Danish?” asked Jensen of his collection of skirts and blouses with child-like cutout patterns. “There’s a bit of a Scandinavian fantasy world to them. Maybe our design in Denmark has something to do with Arne Jacobsen, but it’s also about coziness.”

Cozy is a concept Danes are fond of. They have a word for it: hyggeligt, which translates roughly into “cozying out.” Danes “hyggeligt” through winter in cafes and over dinner in busy bistros, like the popular Soren K at the “Black Diamond,” the modern extension to the Royal Library.

They like to say the verb epitomizes their culture. And cozy was definitely the feeling of the fall collection presented at Day, a men’s and women’s brand that businessman Keld Mikkelsen founded in 1997.

Day is sold in 12 countries, with Scandinavia making up the bulk of its sales. But in January, the firm opened its first outlet in Paris, at the Galeries Lafayette department store, and another inside Selfridges in London.

The former designer at Day, Marlene Birger, who split with Mikkelsen a couple of years ago, attracted one of the biggest crowds of the week with a show in a hangar normally used by UNICEF. Birger’s style went from Forties tweeds to ethnic embroidered coats and tops. For evening, she introduced a “couture” collection of gowns in black satin, some worn with fur cuff bracelets.

On the other side of the spectrum was Munthe Plus Simonsen. Celebrating a decade since designers Naja Munthe and Karen Simonsen founded it, the brand hosted a party and show in a warehouse on the docks.